All About the D by Lex Martin & Leslie McAdam

Title: All About the D 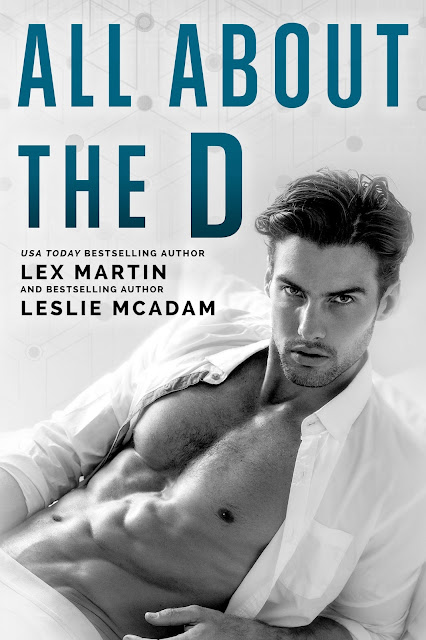 ALL ABOUT THE D
I'm known for being formal. Meticulous. Professional. So you’d never suspect I spend my nights photographing my impressive junk for a NSFW blog. Don’t roll your eyes. I’m not bragging. I have millions of followers who’ll tell you they live for my posts. I’m like a superhero, saving humanity one dick pic at a time. Except leading a double life means I need someone to help me protect my anonymity, so that no one, especially my family, ever discovers my online celebrity. When I call one of the most respected law firms in town, I expect quality legal advice and confidentiality. Not a sinfully sexy attorney whose dangerous curves and soul-piercing gray eyes make me want to personally demonstrate my particular skill set. I shouldn’t be tempted.

Especially when she knows all of my best-kept secrets. But everyone has a breaking point. And I’ve met mine. 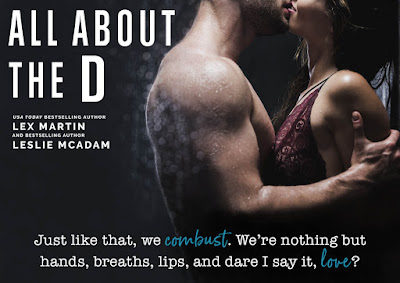 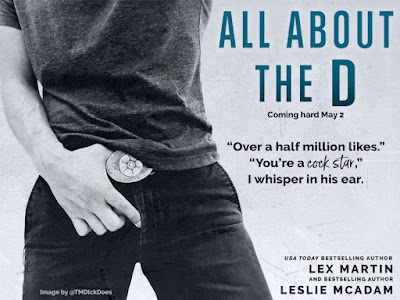 All About the D by Lex Martin
Kim's rating: 5 of 5 iScream Cones

Leslie McAdam is an author you one-click without even reading the synopsis. You add in Lex Martin and you get a book you preorder and count down the days till it appears on your Kindle.

All About The D has a story line that is original, refreshing and hilarious.

The characters wrap you up and soak you into their glorious amounts of wisdom, humor and their overwhelming love and devotion for each other and their friends.
“I’m important to him, and if we’re going to be in each other’s lives, then he wants to know the people who matter to me because they’re important to him too.’

It’s a beautiful story of a brilliant, quirky and sweet woman Evie
“...her piercing gray eyes, those delicate freckles on her beautiful face, and her sweet, albeit awkward, mannerisms, which make sense.”

and a rich, sexy, confident, cock star named Josh
“You’re the guy with the colossal dick and proclivity to post it in weird, urban environments.”

Leslie and Lex co-create a world we lose ourselves to and find our mind creating a space for us in their world.
As you read,
You will love their banter.
The creative and humorous ideas he has for his dick and his blog.
His outrageous and unpredictable friend Drew.
The devotion of each of their friendships.
The panty pudding sex scenes.
The bitterness you will feel for Angela.
Chauncey and his spazy antics.
Evie and her DIY home projects.

This story encases you to the artistry of these two marvelous authors’ words and your emotions coincide with what our charters are feeling and experiencing. Leslie and Lex words create this story to life.

It's pleasantly wonderful how Leslie and Lex have you using a tissue to soak up your tears and realized that it’s the same tissue you have been using to dab at the wet spot in your panties.

You will be lamenting the moment when you realize you have finished the story. Your heart and loins will ache at its absence.

Lex writes contemporary romance, the sexy kind with lotsa
angst, a whole lotta kissing, and the hot happily ever afters. When she's not
writing, she lives a parallel life as an English teacher.

She loves printing black and white photos, listening to
music on vinyl, and getting lost in a great book. Bitten by wanderlust,
she's  lived all over the country but
currently resides in the City of Angels with her husband and twin daughters.

Lex is represented by Kimberly Brower of Brower Literary
& Management. 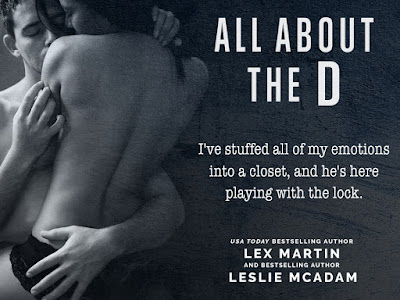 Leslie McAdam is a California girl who loves romance, Little
Dude, and well-defined abs. She lives in a drafty old farmhouse on a small orange tree farm in Southern California with her husband and two small children. Leslie always encourages her kids to be themselves - even if it means letting her daughter wear leopard print from head to toe. An avid reader from a
young age, she will always trade watching TV for reading a book, unless it's Top Gear. Or football. Leslie is employed by day but spends her nights writing about the men you fantasize about. She's unapologetically sarcastic and notoriously terrible at comma placement.
Always up for a laugh, Leslie tries to see humor in all
things. When she's not in the writing cave you'll find her fangirling over Beck, camping with her family, or mixing up oil paints to depict her love of outdoors on canvas. 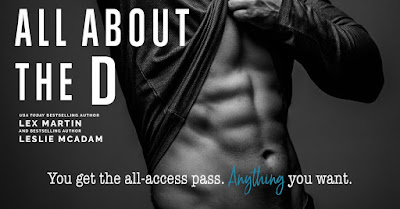