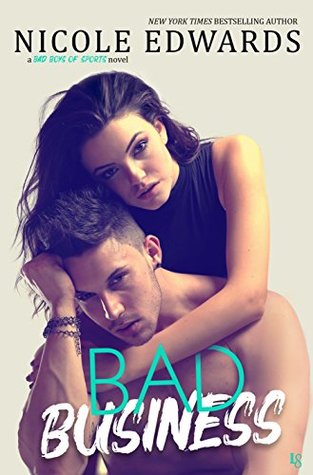 This player’s got a lot to learn if he wants to score . . . with the boss’s daughter.

Football is more than a game to me. It’s my calling. Becoming the Dallas Wranglers’ starting quarterback before I retire is a dream come true, but with a few wins under my belt, suddenly everyone wants a piece of me. And even though being in the spotlight has its perks—beautiful women, star treatment, more beautiful women—what really gets me sweating is the watchful gaze of my sexy-as-hell PR coach, Savannah Andrews. The catch? Her father is kind of my boss. . . .

Savannah: In my family, football is big business. When your dad owns an NFL franchise, you learn a thing or two about schmoozing, and from what I can tell, it’s not a skill in Jason Stone’s playbook. Sure, the veteran quarterback is literally larger than life. With broad shoulders, muscles on muscles, and a mouth made for kissing, he may be one of the hottest men in the league—and I should know. I’ve turned down enough players to start my own all-star team. But those guys just wanted to get close to my father. Meanwhile, Stone is getting temptingly close . . . to me. 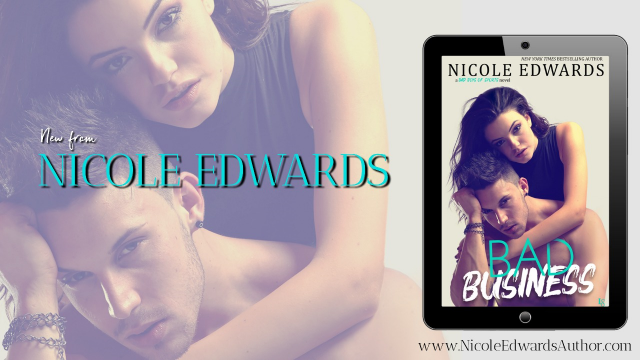 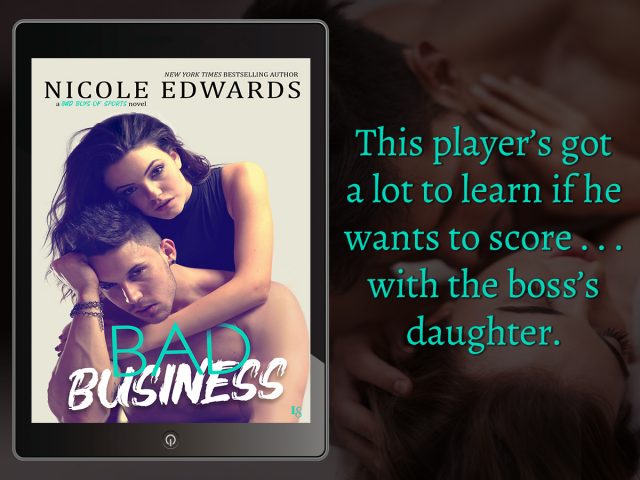 “Hey, Stone! Come over here, son. I’d like to introduce you to a coupla people.”

I pivot around to see Aaron Andrews waving me over. I fight the urge to turn back around and pretend I didn’t hear him. Not like I could really do that, but it’s certainly more appealing than trying to find something to talk about with a man who’s so far out of my league, it’s not even funny.

Some people would say that I’m in the same league, but it’s not true. I’m still a small town boy at heart. Despite the fame and the money—and yes, even my cocky attitude—I’ve worked hard to stick to my values for the most part.

“Yes, sir,” I greet, keeping my tone as casual as I can. “Thanks for inviting me tonight.”

“I’m glad you could come,” he says, waving his hand toward his son. “You remember Will?”

I’ve met Will, talked to him even, but never in a formal setting such as this. As usual, Will Andrews looks ridiculously like his father when he’s decked out in a suit. Same dark blond hair that’s thinning at the temples, the same pragmatic hazel eyes, same pointed nose. Probably the spitting image of the older man when Aaron was his age, which I guess to be in his early thirties, possibly early forties.

I clasp Will’s hand when he offers, shaking firmly. “Good to see you again,” I say.

“Same to you. Nice game yesterday.”

“I’d like you to meet my daughter-in-law.” Aaron nods toward the woman beside Will. “Eve, Jason Stone.”

Eve smiles shyly up at me.

“And I’d like you to meet my daughter, Savannah,” Aaron states.

I notice, like his father, Will likes to be front and center because the elusive Savannah seems to be hidden behind him. I’m mentally preparing myself for a female version of Aaron to step around him as I patiently wait, feeling somewhat awkward staring at Will.

Well, hello again, hot chick from the bar, and most recently my bed.

I pause, praying like fuck I did not just say that out loud.

When no one glares at me, I assume it was only in my head. Thank God.

I don’t mean to stare, but it’s not easy to do considering this is the same no-name woman from the bar who rocked my fucking world on that very same night. The same woman who kissed me like there was no tomorrow, fucked me like I was the last man on earth, and slipped out of my bed undetected.

I’m thinking perhaps there was a reason for that. For one, she’s Aaron Andrews’s daughter. There’s no doubt she knew exactly who I was when she met me.

I should probably be angry, but I’m not.

Regardless, the woman is even more stunning tonight than she was the other night and that’s saying something considering that short black dress she’d been wearing has played a role in the countless thoughts I’ve had about her since that very day. Plus, I might’ve jacked off a few times thinking about the way she moaned and writhed as I plowed her pussy for hours.

Yeah. I probably shouldn’t lead with that.

I swallow hard, while my lungs attempt to reverse their position in my chest. The first thing I notice is that this woman looks absolutely nothing like her father. Or her brothers.

“Nice to officially meet you, Jason.”

“You can call me Stone. Everyone does.”

You can call me Stone? What am I? A moron?

Of all the things I could’ve said, that’s what I chose for my second chance with the absolute most beautiful woman I have ever laid my eyes on. Considering I hadn’t caught her name, nor did I manage to exchange phone numbers, I was beginning to think there was no hope of ever seeing her again.

Honestly, I don’t see this going up from here.

Savannah Andrews regards me from beneath long, thick eyelashes. Her light green eyes are filled with amusement when she meets my gaze head on. If I had to guess, I’d say she’s remembering the other night and the fact that she knew exactly who I was while I had no clue she was the owner’s daughter.

Then again, it explains why she looked familiar. Not that she looks anything remotely like her picture on the team’s website.

Some guys would probably be a little offended that she held something back like that. Not me. I happen to admire her for it. She played me and I can honestly say, that doesn’t usually happen.

“Stone,” she corrects, brushing a lock of dark chestnut hair over her shoulder. “I’ve heard nice things about you.”

My brain runs through a list of things the media has claimed about me. Some of them might be “nice”, but not all of them, I’m sure.

I want to ask her what she’s heard, or more importantly, what she remembers of that night we spent together, but manage to hold my tongue and nod. It’s not hard considering I’m having to make an effort not to drool because… 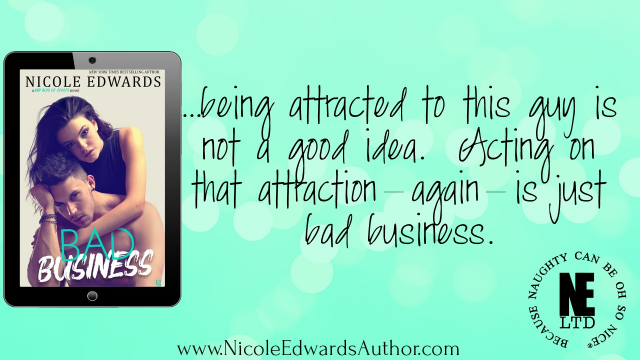 "I can tell that she wants me, but she doesn't want to want me."

I'm so in love with this Bad Boys of Sports series. And Bad Business just revved my engine even higher with #HottieMcFootballMan, Jason Stone.

I especially enjoyed Stone's first encounter with Savannah. Being the veteran quarterback that he is, everyone recognizes him, but she managed to remain anonymous. I was internally giggling when he thought to himself, I know my limits, and when it comes to women, one night is as far as it gets." I couldn't wait for her to change his mind.

It was very entertaining to see them wind each other up, knowing that the big reveal was coming later. The taste of the forbidden was very enticing too. Not that it would be the first time a player and the bosses' daughter hooked up, just that it's not usually a good idea when the team's reputation is at stake. There's always the risk of the media insinuating that there were deals being made between the sheets. But I can vouch that's not what happened. Actually, it's a miracle the sheets didn't catch on fire with all the heat being generated between Stone and Savannah. But just to be sure, I hovered nearby with a fire extinguisher. I had to peek, just for safety's sake. That's my story and I'm sticking to it. ????

When Savannah could no longer avoid seeing Stone 'at work' her identity is revealed. Finding out who she was should have put out the flames of his desire knowing it could affect his job with the Dallas Wranglers, but that wasn't the case. He wanted her. Unfortunately, she put him in #TheClientZone and he had to accept her decision until he could change her mind.

When their jobs threw them together, their chemistry was apparent. They were very amusing with their witty banter, challenges, and bets. As they shared details about their lives, both claimed to be content with their single status and neither was interested in dating or relationships. But there was no denying the attraction they felt toward each other.

I was cheering on the sidelines, mentally matchmaking and willing them to give in, but enjoying the suspense as they resisted. The football action was exciting too and there's a particular team player that I hope to see get his own book in the future. And I totally have a girl crush on Savannah's best friend. She is hilarious and I'm keeping my fingers crossed she ends up with a player of her own eventually, I'd love to spend some more time with her. I can't wait to see what comes next. The line forms here...

Want to catch up on the Bad Boys of Sports series? 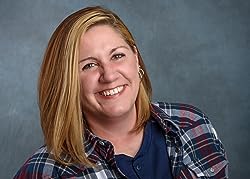 New York Times and USA Today bestselling author Nicole Edwards lives in Austin, Texas, with her husband, their three kids, and four rambunctious dogs. When she’s not writing about sexy alpha males, Nicole can often be found with a book in hand or making an attempt to keep the dogs happy. You can find her hanging out on Facebook and interacting with her readers—even when she’s supposed to be writing. 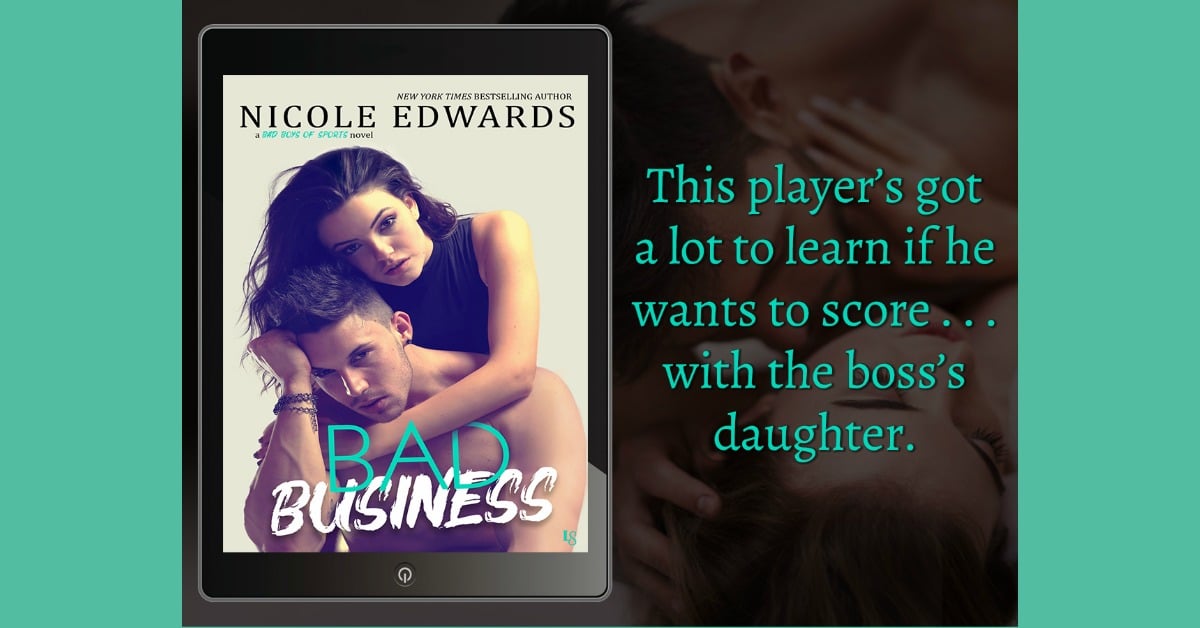