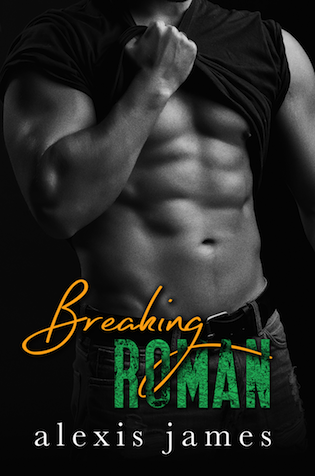 They call me Romeo.

I love romancing women, and I’m good at it.

Too bad it is all a ruse.

Roman, the youngest of the three Moran brothers, is the only one who has ever believed in true love. Too bad his one special person barely acknowledges his existence.

Sabrina Morris spends her days running the HR Department of The Moran Group, and her nights corralling her teenage daughter. She doesn’t have time for love. She’s heard the stories, but Roman is not at all what she expects him to be. His gentle nature catches her completely off-guard. She doesn’t expect to be attracted to him, and she certainly doesn’t expect him to be equally drawn to her. But can she see past his Romeo façade and allow the warm, loving man into her life? 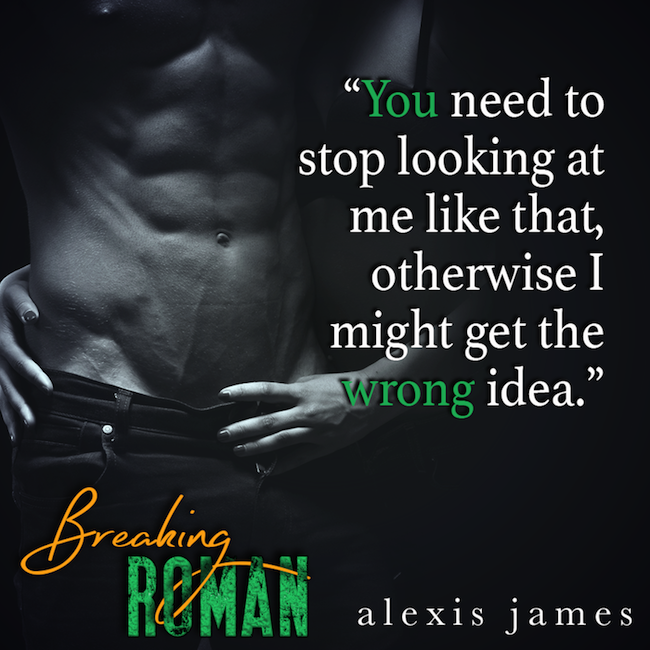 Gahhhhh...Roman "Romeo" Moran!!! This is the first book I have read by Alexis James and now I need to find the time to go back and read the first two books in this series. Breaking Roman is book three in The Moran Family series and can be read as a standalone. I love the authors writing style and her characters are awesome. Even with this being the third book, I did not feel like I was in the dark with previous characters in the first two books. The characters are well developed, believable and engaging, so much so, that I could not put this one down.

Roman "Romeo" Moran has watched Sabrina Morris from afar so to speak. She is the HR officer at his families company and he has crushed hard on her for several years now. He never thought he was good enough for the classy, sexy lady and until now he has kept his distance. Fed up with his "Romeo" ways he decides to take a chance on the blonde who resides in his late night fantasy's. But, Sabrina has other ideas. Roman is one persistent and patient man! Being struck down several times by the feisty Sabrina, is not enough to keep him away. He feels it deep within himself that she is the one for him. And company policies be dammed.

Sabrina Morris has spent the last sixteen plus years caring for herself and her daughter. She has done the best job she can providing for both of them and now has an amazing job working for the Moran Brothers. She has watched Roman from a distance these last several years, he is so far out of her league it is laughable. When he shows interest in her all she knows to do is push him away. She hasn't been with a man in years and the closest thing to a relationship she has with any man is with Jack, her gay best friend.

You can just feel the sexual tension and chemistry rolling of Roman and Sabrina when they are together. Once they give in and take a chance they are nothing short of explosive. I love that Roman is a dirty-talking alpha and loves to have control. But he has this deep caring side to him that wants to protect and take care of those he holds close. His family is the most important thing to him. I love that we get to see that family dynamic come into play. Sabrina has very little family and struggles with the closeness that Roman has with his. She is constantly wondering if she is good enough for the high-class type family that Roman comes from. She hasn't had the same type of upbringing as he has.

I loved this book! I loved Roman. Sabrina is a pretty awesome character as well. She has spent so many years on her own, raising her daughter that she is completely taken aback when Roman wants to date her. She has been out of the dating scene so long that she doesn't know where to start. They have their challenges and Roman is always there to show her that he can take whatever gets dished out and help her to make sense of her frustrations. He is so caring, thoughtful, sexy and all alpha that I swooned. I loved how strong Sabrina's character was, you would have to be after everything she has been through. She frustrated me a little with what a tease she could be with Roman, bit part of me totally understood it since she really struggled with how to act around a man after all these years. Can she take a chance and find love that will last or will her past come back to haunt her and drive a wedge between the life that Roman wants to give her and her obligations to her daughter's father?

Go grab your copy, a comfortable place to read and your favorite beverage and dive into this awesome, romantic, sexy read!

Alexis James lives on the beautiful Central California coast. When she’s not spending time with her hubby of almost 30 years or her amazing kids, you can find her tapping away on the computer. She loves reading, spending time with family, reading, camping, reading….and writing too! She enjoys a good date night, an inexpensive glass of wine, and any story that can make her smile and/or cry.

Alexis’s first novel, “Losing Faith”, was released in September 2014. Her second novel, “Loving Emma”, is a standalone, though it does feature some characters from “Losing Faith”.

4 Comments to Breaking Roman (The Moran Family, #3) by Alexis James