Bride of the Traitor by Hayley Faiman

Title: Bride of the Traitor

Series: The Prophecy of Sisters, #1 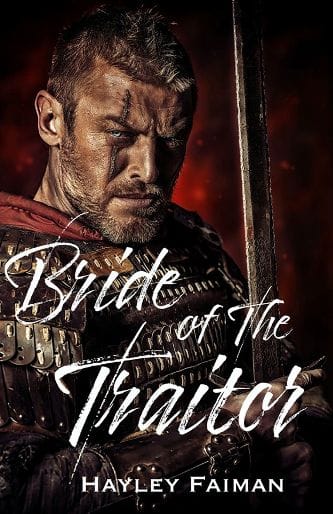 Sybilla Collins knows nothing of prophecies. She keeps her head down as she goes through her mundane life in Portland, Oregon.

Her world is shaken when she wakes up in a dank, dark dungeon of what she believes is someone who takes cosplay a little too seriously. She is convinced she’s been kidnapped from her bed.

When her eyes land on the man she believes has kidnapped her, something happens inside of her. His scarred face should be frightening. Except she can only think of one thing—his touch, she needs it like she needs her next breath.

King Elias Wainwright is now the fateful king of Bunafi. A title he never wished to have, born to a man he’s always despised, a man who was a traitor. The former king is dead. Elias’ sense of duty is now the only reason he sits on the throne.

Sent to fulfill an ancient prophecy of a parallel universe, Elias and Sybilla must find their true heart’s love, or risk the ruin of the world. Knights, magic, gods, and goddesses are what make up this strange new land.

Choices must be made, walls must be broken down, and two people who guard themselves must allow themselves to be vulnerable and find love to fulfill the prophecy or risk certain ruin of an entire world.

Bride of the Traitor by Hayley Faiman

Corrupt Fire by Marie Johnston
My Scorned Best Friend by Piper Rayne
Shake Up My Life by Hayley Faiman
Fall From Grace by Tori Fox
A Million to Stay by Blue Saffire
The Atonement by Kiersten Modglin
Red on the River by Christine Feehan
Perfect Cowboy by A.M. Hargrove
Devoted by Marie Johnston
They Had Eyes of Silver by S E Davis
Found by the Lake Monster by Lillian Lark
Screwed by Rebecca Wilder