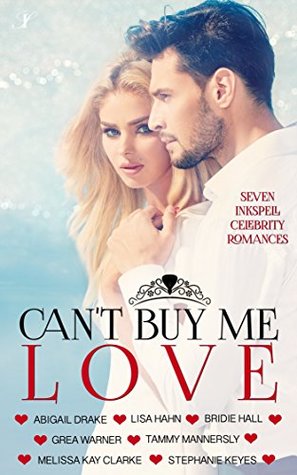 Can’t Buy Me Love
Seven romantic tales of love where royalty, celebrities, and passion meet. A case of mistaken identity, protecting the one you love, or proving you aren’t all about the money…these tales will entice and thrill.

A Royal Pain by Abigail Drake
Getting shot in the bottom turns out to be the best thing to happen to impoverished socialite, Chloe Burkhart in a long time, especially when the prince’s very handsome, very sexy bodyguard, Nicolai, comes to her aid.

Caught by Him by Tammy Mannersly
Blockbuster movie actor, Brody Nash doesn’t quite know what to make of the gorgeous woman precariously perched on his neighbor’s gate, but as they start to get to know each other better, he begins to wonder if she might just be the one for him.

Romancing the Princess by Bridie Hall
A commoner, Sebastian, and Princess Alixandra are set to get married until he begins to wonder if fitting in with royalty is worth sacrificing his principles. Love rules all. Or does it?

All My Memories by Grea Warner
The possibility of reconnecting with an unrequited love leads country music star Finn Murphy on a journey of memories in this special prequel to the Country Roads series.

Defending Demma by Melissa Kaye Clark
When faced with an unsavory past, can Demma St. John, rising new starlet, trust ex-Marine, Ryker “Digger” McMillan, with her secrets and her heart?

His Royal Typeface by Stephanie Keyes
When all is lost, love can be found. Will Prince Asher Tarrington’s unique font design be enough to salvage a royal family and set the tone for true love?

A Royal Pain by Abigail Drake
“Thank you, Nico. For tonight. It meant more than I can ever express…”
My words were cut off when his lips met mine in the sweetest and softest kiss I’d ever imagined. How could someone as big and strong and hard as Nico kiss like this? He made me feel as delicate as the porcelain plates from Grandpa Burkhart, and as valuable.
His large hands cupped my face as the kiss deepened. I covered his hands with mine, stretching on my tiptoes to get closer to him. We broke apart when Ella closed a door from somewhere inside the apartment and called out my name.
“Sissy. Do you know where my new socks are?”
I’d finally gotten her a new uniform, socks and all, and she was setting it out to wear to school tomorrow. “I’ll be right there,” I called out. Nico still stroked my face with his fingers, his eyes on mine. The man was positively hypnotic. He should come with a warning label, Don’t drive or operate heavy machinery after kissing Nicolai Mercia. It could be dangerous.
“Good night, Chloe,” he said, giving me one last brief kiss. “Sleep well.”

Caught by Him by Tammy Mannersly
Even though the Jaguar didn’t stop, Brody took note of Carmody’s look of distaste before she sped away.
“Morning.” He smiled his biggest grin at Willa.
Willa ran the last few steps onto his driveway and then slowed her pace to a walk. “Guess the maid service has come and gone.” She offered him a smirk as she tilted her head in the direction of the convertible.
Brody chuckled and then opened his mouth to correct her, but she quickly cut him off.
“Sorry. Girlfriend.” She propped her hands on her hips. “I should’ve realized. It makes sense a guy like you would be taken.”
Intrigued, his gaze narrowed on hers. “A guy like me? What does that mean?”
“You know,” she began to explain matter-of-factly with a nod in his direction, “a guy who cleans his own pool and uses the same pool-cleaning gizmo to protect the neighborhood.”
“Oh, that kind of guy.” He laughed. “You make me sound a B-squad superhero.”
She raised her blonde eyebrows as though agreeing with his suggestion and then shrugged. “If the B-squad superhero costume fits…”
Brody laughed again, before offering her a more serious expression. “She’s not my girlfriend.”

Romancing the Princess by Bridie Hall
Usually, he left before the morning shed light on the consequences of his actions. This time, his insides squeezed at the thought he’d never get to wake up next to Alix again. It wasn’t fair.
“It’s been …” Alix glanced at him and then dropped her gaze. “Well, I need to go through the customs. Boarding will start in half an hour.” Her voice was croaky. It pained him that he couldn’t tell whether from fatigue or emotion.
She leaned into him, soft and supple, and it took his breath away. His arms came around her reflexively. Her bed hair was a stark reminder of what they’d been doing minutes before calling a taxi to take them to the airport.
“This was real, right? I didn’t just dream it?” Seb said.
He couldn’t quite catch what she murmured into his chest.
“I’ll miss you,” he blurted.
She looked up, opening her mouth, but then she pressed her lips together and dropped her gaze to his chest. He forced her face up with his finger under her chin. He kissed her forehead, her cheek and eyelids, her chin and lips, and felt the bitter taste of goodbye intruding on their intimacy.
His mouth on hers seemed to have unlocked something in her because she finally whispered, “I’ll miss you, too.”
When she stepped away, he reached to push a strand of her hair from her face, but her eyes—miserable and dark—flitted to his for a second and then she was gone, walking away from him, and then running, her purse swaying from her shoulder behind her.

All My Memories by Grea Warner
“Ugh—the light. Why is it so bright?” I squinted my eyes and threw my forearm across them.
I felt like I was in a vacuum. There was a low buzzing sound in my ears. No, it was more like my head.
When I finally adjusted to my surroundings, I realized I was in my bed. The sheets were tousled and thrown. The pillows laid haphazardly on the floor. I could hear some of my fraternity brothers talking in the nearby lounge. I could tell it was probably closer to mid-day than morning by the slightest ray of light that beamed a little too brightly through the crack in the window’s drapes. My stomach swished a little. And then I remembered. I remembered the night before.
“Oh, geez. Oh, God. Lara,” I mumbled to myself.
What had I been thinking?

Me and Tillie by Lisa Hahn
“I’d like a glass of champagne and a whiskey sour.” With two fingers, he waved the bartender to lean closer. When the other man complied, Oren inconspicuously slipped him a five-dollar bill. “Dress a ginger ale up like a whiskey sour. Orange, cherry, the works.”
The bartender tucked the money into his pocket and nodded. “A champagne and a whiskey sour, coming right up.”
Oren leaned on the bar and looked back to Tillie. He’d nearly stumbled earlier when he first saw her in that dress. The vibrant red satin brought out the creaminess of her pale complexion, stunning him with her flawlessness. Her blonde hair had been swept off her face to reveal the round cheekbones, upturned nose, and bow-shaped lips of a starlet.
Oren scrubbed a hand over his face and turned back to the bar. God, he wanted her. But bringing her up to his room would be a bad idea. All her bright-eyed optimism would be wasted for a frivolous one-night affair. If he could give her more, he would. He knew he would. But not now. Not when he felt so broken.

Defending Demma by Melissa Kay Clarke
Several seconds passed as he fought to get his body under control. Finally, he blew out a breath and shook his head with a grin. “As much as I would love to spend all day showing you just how appreciative I am of your delectable body, we have things to do.” He motioned toward the tray. “Be a good girl, finish your breakfast, get your shower, and come in the computer room. I have something to show you.” “Or you can stay here, and I can show you something,” Demma cooed.
“Temptress.” Demma ran a finger down between her sheet-clad breasts and eyed him wantonly. “If I’m going to be labeled a temptress, I might as well embrace the role,” she purred throatily. She watched as his eyes widened and followed the slow journey of her fingers.
With a growl, he took a step back and shook his head. “Woman! What you do to me,” he gasped then closed his eyes.
After a moment, he opened them and grinned. “Later, you can show me just how well you play that role. But for now, we have things to do. I think I may have figured out who’s behind the blackmail.

His Royal Typeface by Stephanie Keyes
Jumping, Bailey gripped the railing and turned, sucking in a breath. It was him. Asher. The man who would one day be king. But also, Jenson. He was each and all of those things at once. His hair was close-cropped and golden, his eyes an unsettling shade of blue that burned straight into her soul.
“All this time we’ve been working together and I didn’t know who you were.” Her cheeks burned. “And I asked you to think royal. I bet you and your staff got a real charge out of that one.”
Some instinct kicked on inside Bailey. Locking her jaw, she managed a stiff curtsy. “Your Highness.”
“Bailey, please. Stop curtsying.” He waved her off and walked to the edge of his own balcony, a too-close neighbor of her own. He could have climbed from his balcony to hers if he wanted, without endangering himself in the slightest. “I didn’t laugh at you. I didn’t do this to get a rise out of you or make fun of you.”
“Then why did you? Why on Earth would a crown prince ever need a job?” She gestured to the gardens and the sea and all of the luxury that sat at Prince Asher’s feet.
“I have my reasons.” A worry line creased the bridge of his nose. If he was being sincere, Bailey was hardly one to judge. He seemed sincere, though. What would it hurt to give him a chance to explain himself?