Confessions: Robbie, an all new tantalizing

by Ella Frank is available NOW! 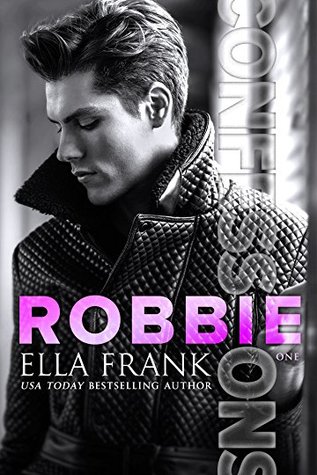 And when it comes to rules of the heart,

they were made to be broken…

That’s what Robert Antonio Bianchi was telling himself, anyway.

Otherwise, he really had no excuse for what—or who—he’d done.

No excuse, except for his lonely heart, a pitcher of margaritas, four Bitter Bitches, and the apparent need to confess all his weaknesses to the two men he knew would bring him nothing but trouble.

But trouble was nothing new.

Just ask his crazy sisters or any of his friends, and they’d be the first to tell you:

If there was a bad decision to be made, Robbie always had a knack for making it.

And thus begins the story of the priest, the princess, and the prick.

If there’s a bad decision to make, I will make it.

DRUNK-DIALING IS never a smart move. But drunk-dialing a married man? That is a monumentally stupid move.

That was the thought rolling around Robbie’s muddled brain as he stood with his best friend Elliot at the bar of CRUSH and tossed back his fourth Bitter Bitch. The conversation he was having with himself wasn’t a new one—or a welcome one, he thought as he swayed on his feet and kind of stumbled into the stool beside him. But forgetting his lonely life with alcohol and men who were all wrong for him seemed like an increasingly good way to cope tonight.

The hum and throb of the bass beat was rattling through him, but instead of feeling the pull he usually did to head out to the dance floor and have fun, tonight it seemed to be having the opposite effect. It was making him think really stupid thoughts.

“You’re so wasted, Bianchi,” Elliot said as he grabbed Robbie’s arm and guided him to the barstool. “What’s that? Your third shot? And how many margaritas did you have at dinner?”

Robbie held up two, then three fingers, and shrugged. “Who cares? Everyone had their New Year’s on Sunday. Tonight’s mine, and I want to celebrate.”

“If you celebrate any more, you aren’t gonna remember your first night out of the New Year.”

“Don’t care,” Robbie said, as he waved his hand through the air with flourish and leaned a little too much into the action. Luckily, Elliot was there to prop him up. “I wanna have fun tonight. Do something I shouldn’t.”

Elliot leaned his elbows back on the bar so he was facing the dance floor and said, “Why don’t you get out there and let someone do you instead? You look gorgeous tonight, darling.”

In his skinny jeans and purple V-neck tee that was practically a second skin, Robbie had gone all out with smoky eyes and a new pink shade of gloss he’d bought a couple of days ago that tasted like—mmm, strawberries. He could totally hit the dance floor, find a willing man, and let him do all kinds of things. But that seemed so boring tonight, so normal, and so not what he wanted.

He wanted wild. He wanted adventure. He wanted danger. And when the two men he knew were both those things entered his mind, Robbie quickly shook his head, trying to shake them free.

Stop thinking about them, he ordered himself, but that was easier said than done. One of them was one of the sexiest men he’d ever seen, and the other the most frustrating—and what was worse was that he couldn’t have either of them even if he wanted to. What was with everyone being fucking married all of a sudden? And to each other?

But oh the dreams he’d been having lately. The three of them, all sweaty and naked; they were enough to make him want to—

No, no, no. That is the worst idea you could have, Robbie told himself. Drunk or sober.

Plus, you don’t even like one of them. So stop obsessing over it.

“You’re not in the mood to grind all over a naked man? Okay, where the hell is my best friend and what did you do with him?” Elliot asked as he swept his black bangs out of his eyes.

“I don’t know.” Robbie slumped forward on the bar, dramatic as ever, and looked up at Elliot from under his lashes. “I think I’m in a state of mourning, El, and I don’t know how to get out of it.”

Elliot frowned. “Is this about Logan? I thought you were happy for him and Tate?”

“I am, but— Ugh. They just got engaged, and now all of a sudden, he’s married. Married.”

“Doesn’t make it any easier. Knowing there are two more beautiful men off the market forever due to a ring and a piece of paper is just depressing.”

“Two more men?” Elliot said, regarding him with a suspicious eye. “Who else do you know who’s hitched?”

Julien, Robbie instantly thought, as an image of the famous chef came to mind.

Julien “the Prick” Thornton. And this time, as Julien’s name ran through Robbie’s head, he made a point to roll the Jul over his tongue the way Julien had when he’d introduced himself that night at the bar. That’s right…Julien “I’m gay, gorgeous, and, oh yeah, married to your worst enemy” Thornton. He was hitched.

“No one,” Robbie said, and pouted. Then he swiveled on the stool to look out at the men gyrating all over one another. “You go and play for the both of us. I’m going to sit here and—”

“Okay that word is too big for my brain right now,” Robbie said, and winced. “Go and feel up the muscles and men for me. Someone should get some enjoyment out of them.”

“Your heart is on the other side, genius.”

Robbie switched sides and did it again. “I’m just gonna drown my sorrows so my body hurts tomorrow and will take my mind off my broken heart.”

“Aww, cheer up, Buttercup. Your Prince Charming will come to you one day soon.”

“Well, until then”—Robbie gestured for the bartender—“I’m going to drink myself into a deep slumber in the hopes that maybe he’ll come on me, or, you know, at least kiss me back to life.”

Elliot placed a hand on Robbie’s arm. “Do not go anywhere. I’ll be back for you.”

“Don’t know how good you are, but…” Elliot chuckled, then before he headed out to the dance floor, said, “Where’s your phone?”

Robbie dug into his pants pocket and pulled it free.

Elliot opened the contacts and scrolled down to his name, and then set it on the bar in front of Robbie. “You need me, call. Do not leave this seat.”

Robbie touched his fingertips to his temple in a sloppy salute and then hiccupped. “Yes, sir.”

“Okay. Be back for you soon.” Elliot then turned to the bartender and said, “No more after this for him.”

When the bartender nodded, Robbie’s mouth fell open. “Hello, you’re not my mother.”

“Lucky for you. She’d be spanking your ass right now, not to mention your sisters, and I’m sure you’d much rather have that done by a man who would then pound it afterward. I’ll be back.”

Robbie dismissed Elliot with a wave of his hand, and then took great interest in scrolling up and down his list of contacts, searching for someone to occupy his time. It wasn’t until he saw Julien’s number that he realized how drunk he was, because that was the only excuse he could think of as to why he hit call.

Well that, and: If there’s a bad decision to make, I will make it.

SWOON!!! I so did not want this book to end. I think I might just be in a book hangover now. Seriously, talk about a smokin' hawt, sexy, make you swoon, tug at your heat strings, swoon some more read! I have always loved Robbie, his out there charm and take no shit from anyone attitude is back and I couldn't have been happier to see the old Robbie emerge in the pages of this book. I have been a huge fan of Ella Frank since I read Try nearly four years ago. She is one of my favorite authors and she really outdid herself with this one. I wanted to crawl into the pages of this book and sit quietly as all the scenes unfolded. I felt like I was right there on the journey that has begun for all three characters. I have to say I am so glad that the next book comes out in a few short months because I want more, more, MORE!!! Have you figured out yet that this book was AWESOME!!! If you are a fan of M/M and want to feel your heart rate kicked up a few more notches then Robbie, Priest, and Julien will definitely have you squirming in delight.

"You should never judge a book by its cover. Sometimes what's inside is more beautiful, and tragic, than you ever thought possible"

To me, this quote really is so fitting for these three characters. We are all so much more than what is seen on the surface.

All three characters have baggage, some more than others, for Robbie we have seen what he has dealt with and now we get a glimpse of Julien and Priest. Priest has always sought to control everything in his life. It is the one thing that keeps him on an even keel. There is so much more to his character than the demanding, sexy, control freak, dirty talking lawyer that only one person has seen, until now. Julien has spent the last several years battling his demons and Priest has been his rock. Together they have more baggage than an airport carousel. But, they balance each other out. But their marriage is lacking something, someone. And that someone has been Robbie. His flamboyant personality and gorgeous looks are only part of what holds their attention. Getting to know Robbie and making him a permanent fixture in their lives may not be as easy as they planned.

I want to shout from the rooftops just how freakin' awesome this book was. The banter, wittiness, sex appeal, and the CHEMISTRY are off the charts amazing. Ella knows how to write a sex scene that will have you doing more than squirming in your panties, you will need to change them several times before the end is read. I laughed and laughed and swooned repeatedly. This is one book that will stay with me for a long time to come. I cannot wait to read Julien! 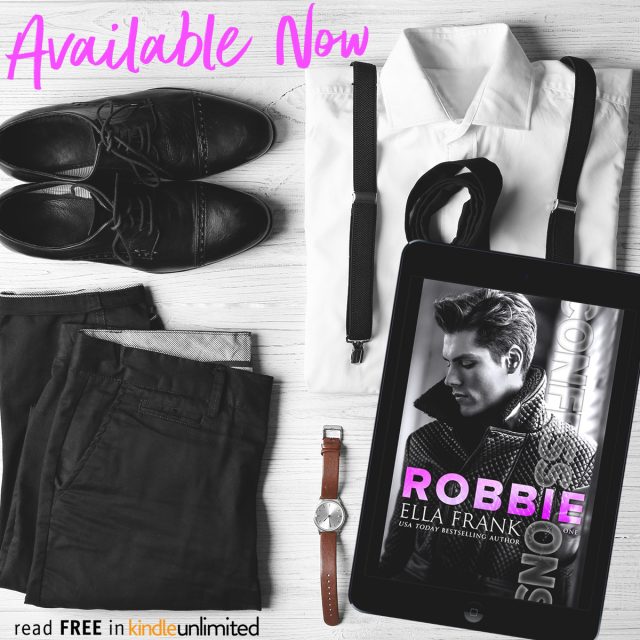 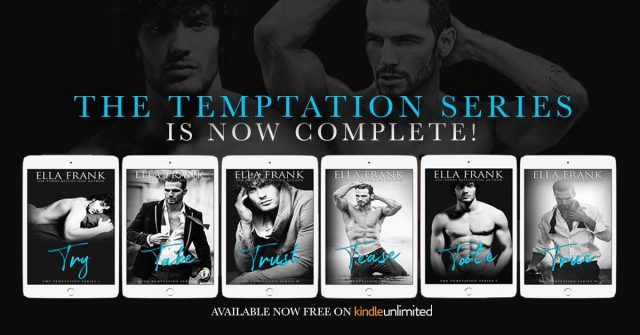