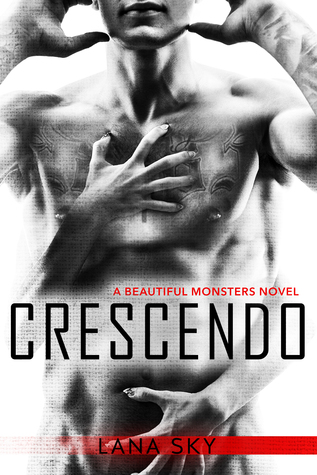 You don’t become the fiancé of one of the most powerful crime lords in the city without understanding exactly how gritty and depraved the world truly is… and how to thrive in the inferno.

After five years spent under his controlling thumb, Daniela knows her position with a man like Vincent Stacatto is precarious, but as long as she plays by the rules of his “game”, she’s safe…

Until she’s taken by the devil.

Kidnapped by a rival boss, Daniela becomes a pawn between two powerful forces, and just another casualty in a bloody game of chess. But to get to the top, and stay at the top, you have to fight dirty and hold nothing back, because the most dangerous piece on the board isn’t the King.

Contains Mature subject matter not suitable for those under 18.

Are you a book reviewer?
Request a review copy of Crescendo here!

I think I hate him the most of all. The bastard with the blue eyes—he’s watching me even now.

The other men are mere dogs like Vinny. They don’t understand anything but violence and bloodshed. But he…this man is different. He’s colder. He’s calculating. He is a snake circling the carnage and swallowing down his chosen prey before the poor soul even knows what’s happening.

Though, maybe it’s the alcohol that makes me so angry. My head drifts. My thoughts are harder to grasp, and sanity is like a rudder, struggling to propel me through the darkness. The bottle is gone; I don’t know what he’s done with it, or if it was really there in the first place.

Delirium likes to play tricks on an already exhausted mind. My head is on a cloud. My right ear is miles away, and everything else feels like distant pulses. I can see my other limbs when I crane my neck down, but controlling them seems about as easy as telling smoke in which direction to float.

I can’t help feeling like this is his own selfish pittance; make the poor girl so drunk she won’t be able to feel her own rape. Hell, maybe she’ll pass out during it. Whatever helps him sleep at night.

Silly, silly bastard. Didn’t he know how impossible it was to sleep with the souls of others weighing you down? They whispered in your ear at night, right before you drifted off, and they haunted your dreams, turning them into nightmares. I haven’t slept in five years. I cease to exist at night. I go numb right until the exact moment that slumber takes me. Then, I open my eyes again, wide awake, and it’s torment.

On second thought, he doesn’t seem as tired as I am. He drank more than me, and yet his posture is stoically erect. He watches me unashamedly. He’s counting down the hours.

“Vinny.” I don’t know why I speak. My voice is a hollow whisper that slithers to the farthest reaches of the room—he can’t pretend like he doesn’t hear me. “Vinny. You want to know what would really make him angry?”

My tormentor doesn’t answer, but I know I’ve piqued his interest.

If only so he could kill me himself.

The man doesn’t seem impressed by what I’ve said. He’s un-amused by the unfiltered Daniela, but she suddenly feels desperate to have an audience.

“I would do it, too,” I tell him. Virginal Lynn’s deep, dark secret. I would take anyone over Vinny. The red-haired man. Any one of his thugs. The man with blue eyes.

Anyone. I’d deny him the one thing of value I had left. No matter how tonight ended, Vincent Stacatto wouldn’t claim all of me.

“I’d do it,” I say out loud, just to make it sink in. My confirmation to the universe if not to the man himself. Vinny would never have me fully. The thought makes me snicker, and the blue-eyed man pulls away from the wall, bored of me already.

I watch him head to the doorway that leads to the stairs. There he pauses, and it’s only then that I realize someone else is already in the process of descending them.

“It’s show time,” the red-haired man declares in a guttural rumble. His eyes burn with a sickening mixture of rage and excitement.

Slowly, my gaze drifts over to focus on the wall. I’m not here anymore. I see a stage…a cello. I’m playing Bach. My mind spins the invisible notes. I focus hard on crafting the melody, its soothing cadence. But I’m too dizzy. Words break through the song.

“What the fuck is wrong with her? Is she drunk?” The words dissolve into countless syllables that bounce across the room. My head throbs. A million thoughts and fears leak through the cracks these men have beaten and cut into—I can’t hide them anymore.

A hand grazes my shoulder, and I flinch. Then the entire chair is wrenched out from under me, and I land hard on the floor. My knee smarts. More pain joins the symphony of it that fights with the rising stream of voices for my attention.

“Set up the camera—”

I bite my lip to silence a scream and squeeze my eyes shut, blocking out the room and the men who crowd it. I’m not here. I’m floating…flying…playing. Bach’s melody fills my ears again. My bow is in my hand. I can feel the tension in the strings.

“All right…get her clothes off.”

A hand seizes the collar of my borrowed shirt and tugs. I hear ripping. There’s cool air on my back and the laughter and jeers of countless men battle with my attempts to ignore them. My cello is too heavy to lift. The bow breaks. The music dies off.

All at once, I’m lying on an ice-cold floor, clothed only in a pair of underwear, which someone attempts to drag down my legs while they croon what a “sweet ass” I’ve got into my ear.

The hands stop tugging, but the calloused fingertips still graze my skin. Whoever speaks…he has a voice that makes the entire room go silent. The roar of a lion is heeded by all predators. A part of me flinches in recognition. I know that voice, but my mind is too busy spinning to place it. 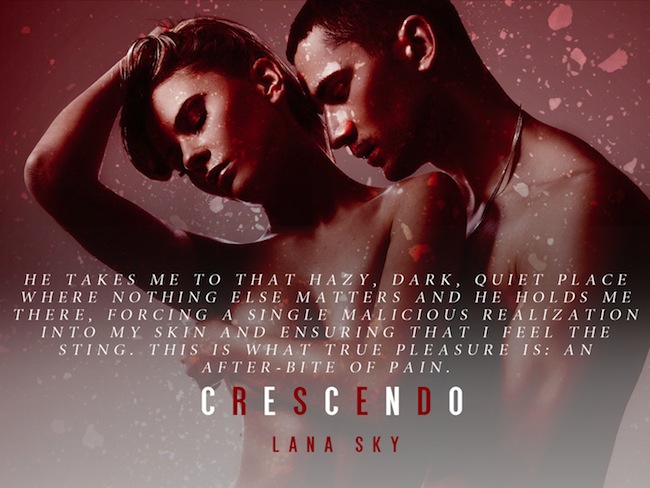 Lana Sky is a reclusive writer in the United States who spends most of her time daydreaming about complex male characters and legless cats. She writes mostly paranormal romance, in between watching reruns of Ab Fab and drinking iced tea. Only iced tea.

Drain Me is her debut novel and the first novel in the upcoming "Ellie Gray Chronicles."

One Comment to Crescendo (Beautiful Monsters, #1) by Lana Sky