Falling for the Fake Fiance (Snowpocalypse, #2) by Jennifer Blackwood

Falling for the Fake Fiance

Jill Michaels prides herself on one thing: being independent. That is until her daughter gets into an elite school, and she needs money more than ever. It seems her fairy godmother—aka her deceased Grammy—has granted that wish in the form of one-fourth of her estate. The only catch? She must be married by her thirtieth birthday. In two months.

Aaron Collins is fresh out of the army and back in town to help his father’s failing business. When he runs into Jill at a hotel where she’s attending a single’s mixer, he makes sure she doesn’t make it past his room and into another guy’s arms. When he hears about her predicament, he has a plan: they’ll get married and keep it a secret. And maybe have a little sexy fun until he leave towns for his new job.

But letting go of the woman of his dreams may be harder than Aaron could have ever imagined.

Falling for the Fake Fiance by Jennifer Blackwood
Rosa's rating: 5 of 5 iScream Cones

Falling for the Fake Fiancé

Yesss, what a fun Rom-Com I just read!!! This book is the perfect amount of Romance and Comedy and I hardly wanted to put it down..lol

This book is about Jill Michaels. The story starts with Jill at the reading of her Grammy's will. She learns that she will not get anything unless she gets married by the age of 30...and oohhh Lawd..she only has 2 months to achieve finding a man, courting, hope they have sparks and he proposes and they get hitched within this time frame. Y'all the whole aspect of this book makes for such a fun read. Jill has a hilarious BFF and this girl will keep you rolling and you wonder why Jill doesn't just smack her and tell her to get the hell outta dodge at all the one liners she dishes out..soo funny..lol

Sooo anyway, Jill and her BFF are at a hotel and Jill is attending a singles mixer and she runs into a former next door neighbor guy friend. But like herself, he is all grown up and not the young boy as she remembered him, he has grown up to be a Hawt Ass Man!!! Goodnesss, the sexual tension is off the charts and Jill may have just found her answer to her marriage issue.

I gave this book 5 iScream Books Stars!! I always love these kinds of books. They are usually soo much fun to read about. So make sure you go one click this book so you can find out if Jill gets her Fake Fiancé or maybe she gets a hubby for life??!!! : )

What a weird feeling—she sat across from someone she’d seen every day in high school, and yet the man in front of her was a complete stranger. One with blue eyes so dark they looked like whorls of ink. Ones that were subtly undressing her, if she was reading the situation right. She took another sip from her glass. Was it getting hot in here? Because, man, was she thirsty. Better to focus on things she could control. Like the tasty wine. Yes, this wine was fantastic. Maybe if she focused enough on her drink, her body would stop tingling from the heated glances Aaron kept throwing her way.

With shaky hands, she placed the glass back on the table. It’d been a while since she’d been in the company of any guy she was actually interested in, but she forced down the nerves. “What do you have lined up now that you’re out of the military?”

“I’ve been rooming with a buddy up in D.C. He did me a solid and found me a job at a private security firm he works for. I’ll start it as soon as I’m finished helping my dad. What have you been up to?”

Oh, you know, getting wild and crazy with Netflix binges of Paw Patrol and worrying that she’d get some type of lung disease due to accidentally inhaling too much mac and cheese dust. Her life was glamorous. It might have qualified as pathetic that she enjoyed dentist appointments and even routine check-ups just for the sole fact she could get a minute to herself. Her AARP card was due in the mail any time now. “Same old, same old. Nothing really changes in our town.”

“Besides the fact that you’re now attending singles mixers. When did that start?” He took a long sip of his beer, watching her with an intensity that made her skin tingle.

“Tonight. It was silly, really.” The last thing Jill wanted was for Aaron to know that she’d gone out in search of a husband, because how desperate did that sound? One bad haircut stood between her and Brittany Spears circa 2007.

“I don’t know how long I’ll be in town, but I’d be more than happy to take you out.”

His forearms flexed as he gripped the pint glass, and she mentally shook her fist at the fact the sleeves of his flannel weren’t pushed farther up his arm. Maybe Kate was onto something. Broad shoulders, dark eyes, lips that she should have noticed were kissable years ago, because whoa.

The next time she glanced down at her cell, they’d been talking for hours, catching up on everything from crazy stories from his time in the military to her latest run-in with a very involved dance mom. For real, those ladies were scary.

She peered around the room and realized that they were the only occupied table, besides a few stragglers at the bar. “I should be getting back to my room. It’s getting late.” This was the best dinner she’d had in months. No, years. When was the last time she’d actually enjoyed the company of a man, one whose deep voice was a warm caress down her spine? By her calculation and the fact she could call herself a born-again virgin thanks to the lack of action…it had been a freaking long time. Maybe it was the wine. Or maybe it was the muscly, drool-worthy man in front of her, but dammit, she wanted one night of fun. Screw the whole search for a temporary husband—it wasn’t going to happen. But she could be happy for a few hours in other ways. 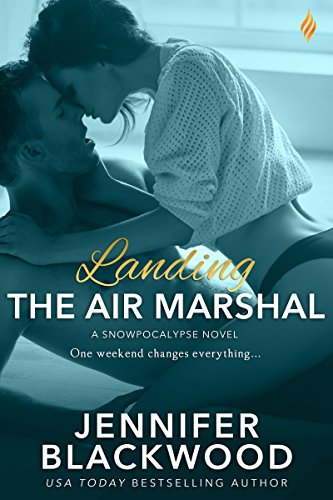 Jennifer Blackwood is a USA Today bestselling author of contemporary romance. She lives in Oregon with her husband, son, and poorly behaved black lab puppy. When not chasing after her toddler, you can find her binging on episodes of Gilmore Girls and Supernatural, and locking herself in her office to write.