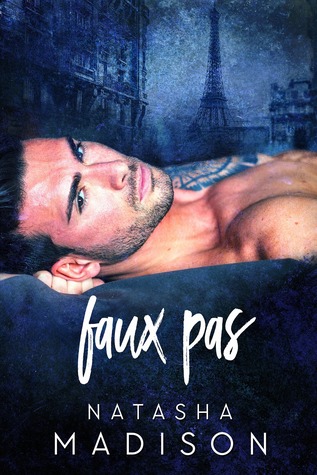 Meghan
Five days in Paris sounded like a great idea for three friends. Especially when amazing wine was in play.

It didn't matter that our rented “apartment” only had one bed, and barely enough space to breathe. We were in Paris and our motto was c'est la vie.

Nothing would faze us, not even the rude waiter at the first restaurant we went to, or the insanely hot manager who was insulted when a bottle of wine was returned.

Nothing could bring me down or knock me off my path to the best vacation of my life.

I had six days in Paris and then I'd go back to my wine vineyard. It was smooth sailing until three "Americans" came into the restaurant and returned my newest full-bodied, savory creation.

I ignored her until she stormed out of the restaurant looking for a taxi at one in the morning. I couldn't leave her wandering around the streets of Paris, could I?

I’d give her a ride, make sure she was safe, and my duty would be done. Except, was it?

Something about her pulled me.

This could be a vacation fling. After all, there is no real reason for her to know my interesting secret.

This 'faux pair' is almost a faux pas... 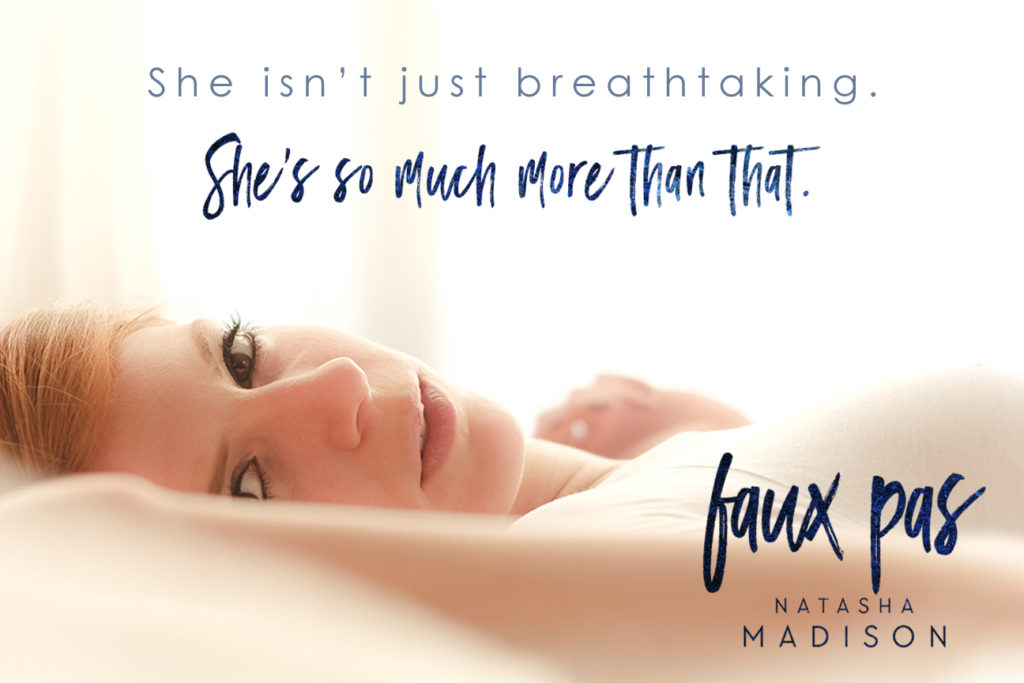 He makes his way through the tables, straight to ours. “quel est le problème?” What is the problem, his voice comes out gruff, the smell of his musk hitting my nose.

“Le vin n’est pas bon,” The wine isn’t good, I start saying, and I look at his eyes that look almost black. I’m not sure if it’s his natural color, or if the restaurant is dimmer now than before, or maybe it’s just his form blocking the lights. “il a un goût de vinaigre.” It tastes like vinegar, and I’m not sure it was the right thing to say or not. He stares at me, not saying a word. “Taste it.” I give up on my French and switch to English. “You’ll see.”

I’m waiting for him to say something back, but he doesn’t. Instead, he turns around and walks away from the table, going into the back. “What the fuck just happened?” Diana says in a whisper. We all turn to see where he went, checking to see if he is going to storm back in.

“She insulted his wine,” Kate says, leaning in and speaking softly.

I throw my hands in the air. “It was shit,” I say louder than I wanted to. “You guys said it yourself.” Looking around, I see that a couple of the tables are looking at us, but the majority of the tables are deep in their own conversations and not paying attention.

We don’t say anything else when we see the waiter come back with a new bottle in one hand and a new wine glass in the other. He uncorks the wine, then pours a touch in and waits for me to taste it. I don’t say anything to him; I just nod my head, and he puts the bottle in the middle of the table. “I guess I will pour the wine,” Kate says, picking up the bottle and pouring it in everyone’s glass. I pick up the glass of wine and bring it to my lips. The cold glass is resting on my lips when I feel someone staring at me. I look down and take a sip, then look around, and I guess it’s just me because no one is looking in my direction.

By the time we finish dinner, we’ve drunk two more bottles. and everyone is laughing and having a great time. The food was amazing. “We need a taxi,” I say. Getting up, I grab my jacket, shrugging it on.

“I think we can walk to the corner that way,” Diana says, pointing at the sky, “and flag one down.”

“If we go that way,” Kate says, pointing at the sky, “we need to call NASA.” We all laugh out loud while the waiter comes to take the bill from us.

“Merci.” We smile at him as he walks away, still not saying a word.

“Yes, thank you for my glass of ice cubes that you only brought me one of even though I asked for seven,” Kate says, laughing while trying to whisper. “And thank you for pouring our wine.”

“I’m going to ask him for a taxi,” Kate says, going to the waiter who stands at the hostess counter and asking him for a cab.

I watch from the front door as Diana stands behind her while I look in my bag and pull out my lip gloss.

“Pardon.” I hear Kate say loudly, and I look up.

“Vous pensez qu’après tout ce que vous avez fait ce soir vous méritez que je vous appelle un taxi ?” I stand here with my mouth open in shock when he answered her. Do you think after everything you did to me tonight that you deserve that I call you a taxi?

Kate starts. “What did I do? Expect you to do your job?” she says, and Diana grabs her arm, pulling her to the front door.

“Did he just say …?” I ask her when we are standing outside in front of the restaurant, the wind blowing my hair in front of my face. I turn my head, making it fly back the other way.

“So it’s safe to say,” Diana starts with a laugh, “we aren’t coming back to this restaurant.”

“Take a picture of it, and tomorrow we can go on Yelp and leave a bad review,” Kate says, grabbing her phone from her pocket.

“Let’s just go,” I say, and the three of us look around at the desolate street.

“Yeah,” Diana says. We look right down the dark street and see some traffic coming from up ahead. “We should walk to that street and flag down a taxi.”

We all nod and start walking with Kate in the middle. “He was such an ass,” Kate says, “and the boss or manager was an even bigger ass.”

“Seriously,” I say, turning to them. “It’s like it was my fault his wine was shit,” I say, and then we all stop when a white four-door Audi stops next to us, surprising us.

“Get in.” The voice sounds familiar, but the street is so dark it doesn’t help. I lean in a bit to see his face, and I’m shocked when I see it’s the manager from the restaurant.

Every time I hear Natasha Madison is coming out with a new book I get so excited, when she does I know I’m in for a treat! Loved Faux Pas!

Love Alex and Meghan’s story, it was fun, sexy and had me laughing out loud and possibly had me tear up a time or two.

Meghan and her two besties book a trip to Paris after one to many glasses of wine. You only live once right?

Alex is France’s most eligible bachelor, but she doesn’t need to know that. Right?

The sparks flew the minute these two met. And omg Meghan and her sass! Loved it! And Alex, sexy as hell and so damn charming!
Loved this story and these characters, definitely a story that will keep glued to your kindle!
Another wonderful story from and amazing author! Definitely one click worthy! 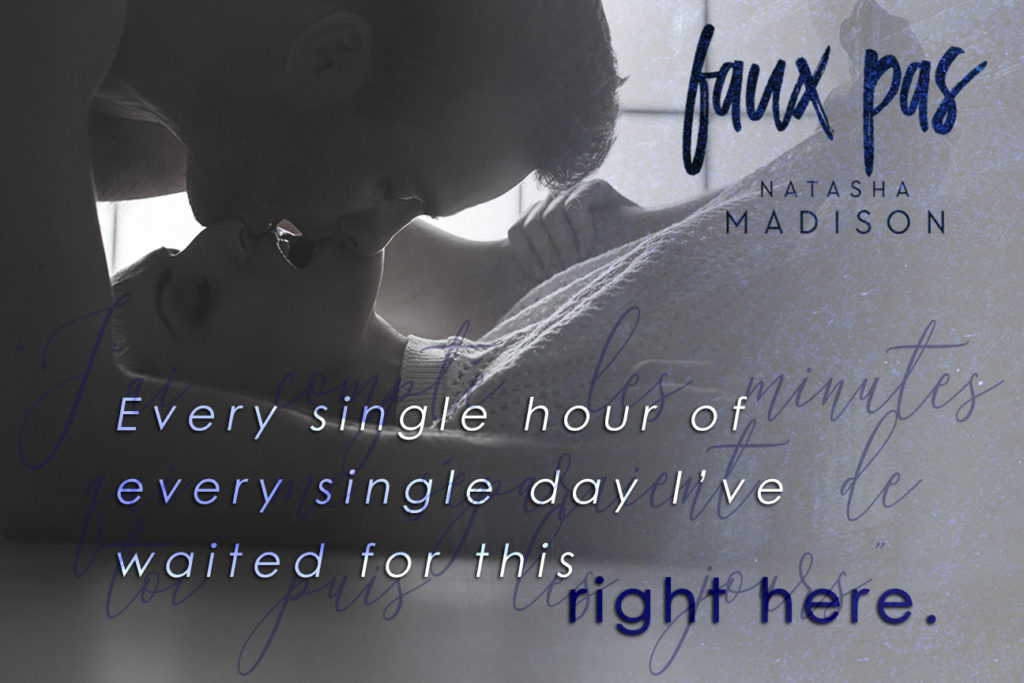 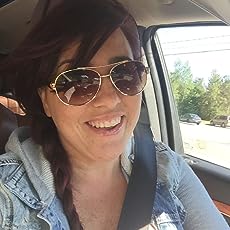