Hart of the Storm by Skye Turner

Amberlee Hart has always had it easy. Her beauty and ability to sing like a Siren have made her a star in Louisiana. Though her dreams are much bigger than “the boot.”

While driving to the most important audition of his life, Jeb stops to help a woman in distress.

Amberlee instantly recognizes the “boy from the wrong side of the tracks” who frequented her thoughts "way back when".

Forgotten attraction is rekindled and a relationship is formed.

Passion wars with beautiful music as both pursue their dreams.

There can be only one star.

Will the man who's always had to fight for everything in his life forfeit his dream for the one thing he’s never had… love?

Will the woman who's never doubted she'd find fame compromise her dreams for the perfect man?

Can love conquer the Hart of the Storm?

**This is an adult romance book and contains explicit language and graphic sex scenes not suitable for all readers. Intended for those over the age of 18.

Skye has written another can't put down book! This book was a second chance story. I loved how they are both pursuing the same dream of becoming more talented than they both already are. Hart of the Storm is filled with passion, music, and some southern charm.

Amberlee is a young woman who always had the simple ways of life. She comes from a well known, privileged family in Louisiana. Her incredible singing voice and dream of being bigger than just the state she lives in.

Jeb has always been labeled as the "bad boy" because he lived on the wrong of the tracks. He didn't have the greatest upbringing, but he survived. He wants to prove to everyone that he is better than they all think.

Jeb and Amberlee are both heading to audition for American Dream, a music competition. Amberlee's car breaks down on the way and in comes Jeb to her rescue. They recognize each other from high school, even after all these years. Amberlee had harbored feelings for Jeb back then an seeing him all over again sparks an interest. When they get to the competition, their audition times are close to each other. Jeb is seeing Amberlee in a different light than from high school.

Will Jeb get the chance to make it big? Or will it be Amberlee? Does the chemistry they share ignite or will it burn out?

I honestly loved every part of this book! It was hilarious and filled so much love for music. One of the things I thought was great was the inner dialogue that Jeb and Amberlee had! Great book! Must read for a light and fun summer afternoon. 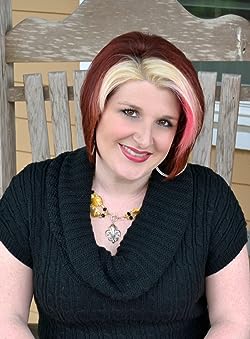 Skye Turner is an avid reader and an editor turned writer.

She attended Southeastern Louisiana University and Louisiana State University where she majored in Mass Communications, centering her studies in Journalism.

She lives in small town Louisiana with her husband, 2 kids, and 8 fur babies.

When she's not chained to her laptop pounding out sexy stories she can usually be found playing Supermom, reading, gardening (playing in the dirt), or catching up on her family oriented blog.