I Hate You by Ilsa Madden-Mills

Title: I Hate You 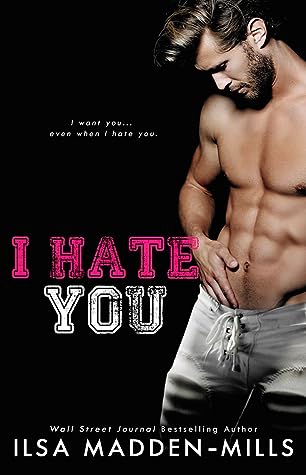 There’s a fine line between I hate you and I want you.
Once you cross it, there’s no going back.

She’s been expecting this ever since their latest showdown. She had good reason.

Hottest guy she’s ever seen.
Former fling.
Dumped her in front of all her friends.
At her own party.

So no, she’s not about to forgive and forget just because he sits next to her in class. He thinks all he has to do is turn on those baby blues, and she’ll melt right back into his arms. Please.She’d be crazy to let this cocky player affect her again. (Tell that to her body.)

Charisma Rossi.
Nerd girl with a dash of bad.
The one who got under his skin.
The one he cut loose.

Blaze knows she’s the riskiest prospect at Waylon University, but none of the interchangeable girls he hooks up with have ever made him feel the way she did. There’s absolutely no way he can have the girl and the game.

So why can’t he stop trying to win her back?

Can this wide receiver score the girl or will he make the biggest fumble of his life?

I’m on my tiptoes when the question comes, trying to reach a book on the top shelf in the bookstore at the student center.

My heart does a nosedive off a cliff as that familiar gruff voice washes over me, his accent a smooth drawl that’s reminiscent of hot summer nights and slow kisses—kisses we never had…well, except for that one time freshman year.

I ignore him and try to grab the book.

“You’re too short. Let me,” Blaze says, this time closer, his voice soft.

I ease back on my feet and whip around, internally wishing I’d worn something more I hate you and don’t you wish you still had me, but sadly, I’m not in my kickass shoes and itchy dress. Today it’s flat-soled red Converse, black joggers, and a Yankees sweatshirt. I blow at a piece of hair in my face. Shit.

Of course, he looks magnificent in a tight long-sleeved black shirt that clings to his broad chest and tapered jeans molded to those leg muscles. His face is unshaven, the darkness on his jawline adding a broody look.

Curse him and his hotness.

I stare at him a little too long, until I snap out of it.

“I don’t need help,” My voice is strangled as I move to brush past him—forget the textbooks—but he reaches out and takes my elbow.

His fingers are a hot brand on my skin—it’s the first time we’ve touched in three months—and I pull away. A tremble starts in my legs. How dare he?It was one thing to see him in a social setting and pretend I was fine, but when we’re face to face without people watching… “Don’t put your hands on me. I’m not your hookup anymore, football player.”

His face reddens, and he drops his arms. “I didn’t mean—” he stops, not finishing as he studies my face.

I wonder what he sees. You know what he sees, Charisma—someone who wasn’t up to his usual standards.

Everything I didn’t say last night rushes out. “Didn’t mean to what? Dump me in the middle of my own sorority’s party in front of all my friends and half of campus? And you know, that’s totally fine. We both knew I wasn’t enough to keep your attention.”

His jaw clenches and he frowns, his brow furrowing. “I didn’t plan for things to happen that way.”

“How did you want to break up with me? Over candlelight? A text would have worked just fine,” I bite out.

The silence builds between us, and he watches me intently, as if trying to figure me out. He starts at my hair and works his way down to my feet, then comes back to my face. Just when I think I might combust from the intensity of his eyes, he looks away.

“What?” I cock my hip. “You look like you want to say something.”

He taps his hand against his leg. Ice-blue eyes, ones I used to stare into and get butterflies from, glitter down at me. “You just can’t handle that ended things, sweetheart.”

Shit…shit…my heart feels like an anvil just landed on it, heavy and hard, and I can’t breathe for a second at his words, part of me pissed, the other part devastated. I wanted to be his sweetheart, I did, but he…

You’re not my type.

“Thanks for the reminder,” I say quietly, my anger folding away piece by piece and slipping into that horrible self-pity I despise.

He closes his eyes and scrubs his face with those talented hands, strong and big and capable, skillful with a football.

He steps in front of me, much like he did last night, and I tilt my head back to take him in. At my height of five feet, three inches, it’s hard to glare at a guy who towers over you and not look ridiculous, but I manage—until his eyes flicker with lingering emotion.

I dart my eyes around the store, searching for a way out, but I’m stuck between him and a bookshelf. “You’re blocking my path.” I focus on his legs. No sexiness there—well, except for the tight muscles under that denim.

“This is what I know,” he says in a low voice, ignoring my statement. “You told me we were just messing around. You set all the rules. Isn’t that how you operate? So why does me ending things with you even matter?”

“You never asked for more. You could have.” The revealing words fall around us, tinged with hurt, and I want to pull them back.

The silence between us crackles, yet I’m aware of other people around us. There are a few girls on another aisle, and I glance over as one of them pulls out her phone. No doubt she’s taking a picture of him. Part of me retreats, anxious she’ll get me in that photo—a girl who clearly doesn’t belong. He doesn’t notice. Everyone knows who he is, and they’re probably wondering why he’s talking to me.

“No, I didn’t,” he finally says, the words taut as if pulled from him unwillingly. He taps his leg, his tell that he’s anxious or angry. We weren’t together long, but every moment we spent together, I studied him like a wine connoisseur given a glass of rare cabernet. I know what makes him laugh, usually random things that make no sense. I know that groan he makes deep in this throat when he slides inside me, like he’s home. I know the feel of his hand when he cups my face and stares at me, a hesitant expression on his face—

“You can’t even look at me anymore. I wonder why,” he says, his voice a challenge.

Steeling myself, I face those baby blues. “You know why. I wish we’d never met up last fall. I wish you’d never flirted with me. I wish I’d never fucked you that first time in the library—”

“Same page. Same fucking page, Charisma.” And then he’s walking away, broad shoulders swaying as he stalks down the aisle… 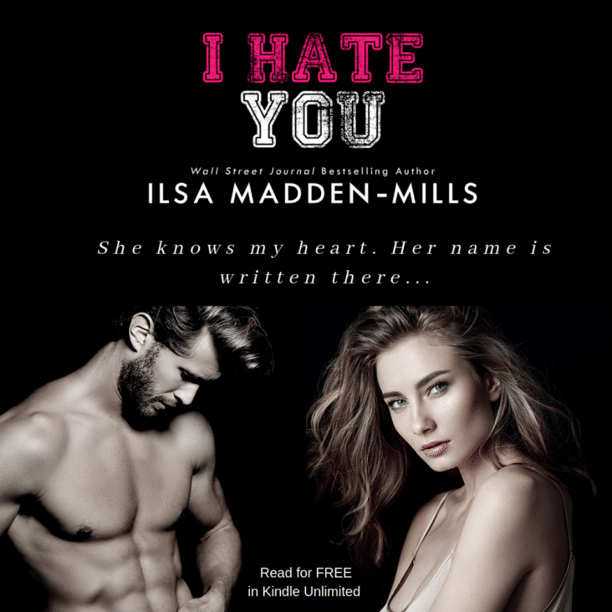 "Ugh. He's a sparkly, sexy unicorn. And everyone wants to ride him."

Confession, I don't blame them. He is sexy. But, he's also broken, which makes him even more attractive to me. I can't resist broken bad boys. I love it when they hate each other, too. There's so much to like about this story that I don't know where to start, here goes...

She got dumped publicly and has an attitude. After licking her wounds, she's determined to prove to him she doesn't need him and to show him what he's missing. Unfortunately, when she sees him again she realizes she's still among the horde of females who can't look away when he's in the room. How frustrating that must be, huh?

What she doesn't know is the real reason he pushed her away. He hurt himself almost as much as he did her when he deprived himself of her. But, it's for the best, right? Yeah, keep telling yourself that, Blaze. Especially when you see how hot she looks and how many other guys would love to pick up where you left off. It seemed like a good idea at the time, but the more he's thrown into her orbit the harder it is to convince either of them that he hates her...

The author steamed up my Kindle and my temper with this tempting tale. She had me going from seething to smiling and then from sad to smirking and back again. She melted my heart and my panties with emotion and passion. I wanted to throw a match to watch the explosion that their chemistry would create if they ever allowed it to combust...again. But, at the same time, I thoroughly enjoyed the buildup. They threw heat and sass at each other and it was very entertaining.

Damn. "I like you bossy as long as you know I'm really in charge."

Not only is there #FOOTBALL 🏈 it is #FUNNY😂 & #HOT! 🔥 Grab your copy of I Hate You, you won't be disappointed. Have you seen the cover? IKR? This one definitely deserves a spot on my bookshelf. The line forms here... 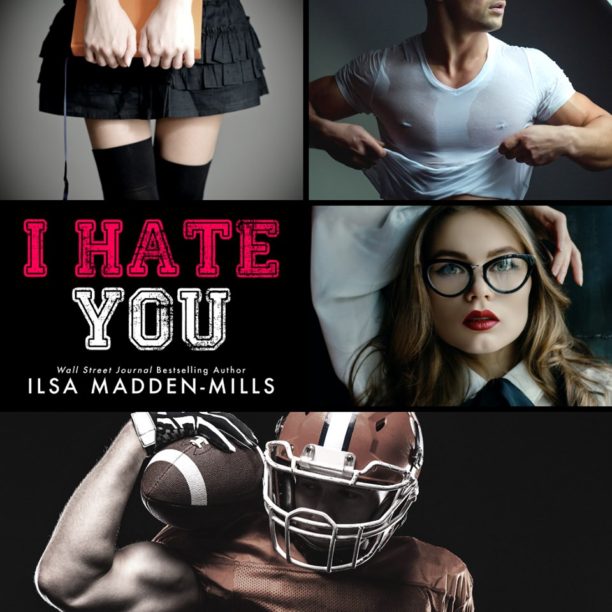 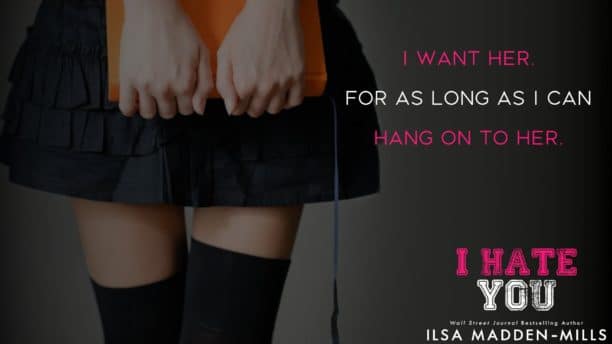 Eight of her eleven novels have placed in the Amazon Top 10 Best-seller List: Dirty English #1; Fake Fiancée and I Dare You #2; I Bet You, Filthy English, and Very Bad Things #6; Boyfriend Bargain #8; The Last Guy, her collaboration with Tia Louise, #4.

A former high school English teacher, she adores all things Pride and Prejudice, and of course, Mr. Darcy is her ultimate hero. 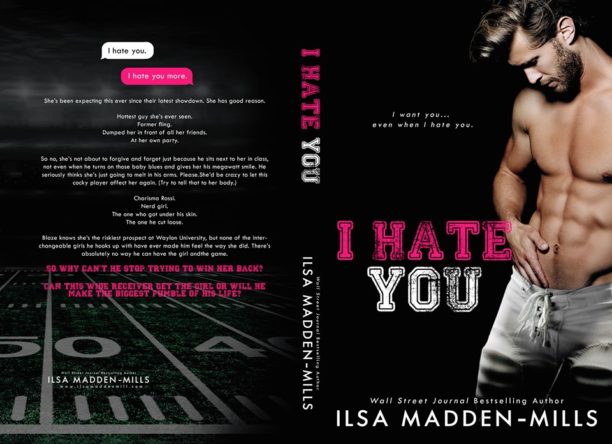 A Million to Stay by Blue Saffire
Briana by Carmen Rosales
Doctor Playboy by J. Saman
Not a Role Model by Lani Lynn Vale
Offside with #55 by Piper Rayne
Exiled by Brenda Rothert
Hard Pass by Brenda Rothert and Kat Mizera
The Billionaire's Possession by Bri Blackwood
Under the Night Sky by J.L. Kenna
Savage Impulses by Michelle Hercules
A Love So Bright by Persephone Autumn
Filthy Elites: An Enemies to Lovers Anthology