I Stole His Car (Love at First Crime, #1) by Jessica Frances 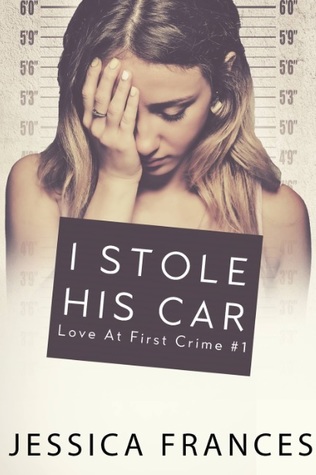 She stole his car, so he stole her heart…

I saw something I never should have seen.
I took something they wanted back.
I was desperate.
Alone.
Hunted.
So, I did something I never would have normally done.
I stole a car.
Not just any car.
His car.
Now I have no choice but to trust him.
Only he can help me get out of this mess.
Then, when we both become hunted,
And when feelings begin to complicate things,
Can I still count on his protection?
Can I trust what is happening between us to be real?
Because, as some people say: there is nothing quite like love at first … crime.

Then Zander’s gaze turns back to me, and I don’t feel so warm and fuzzy toward him anymore. Instead, I feel as though I’m facing a judge and ready to hear the verdict on just how many years I’m about to be thrown in jail.

“You stole my car,” he growls.

“Yes.” No point denying it.

“You kidnapped my twelve-year-old brother.”

“Technically, yes. However, I wasn’t aware he was in the car at the time,” I pathetically try to defend my actions.

“You came back, though, even after I told you I was calling the police.” His stance is stern, but I see the same expression of curiosity that I saw earlier in Van.

“Yes.” I glance around again, waiting to see the flashing lights of a police car approaching in the distance. Instead, I see a lone officer in uniform approaching us.

I don’t recognize him as one of Brian’s friends, but that doesn’t mean he won’t hand me over to him.

I barely even got to enjoy my freedom away from Brian. Well, it technically wasn’t freedom since I was chased the entire time.

Why can’t I just catch a break?

I can’t stop myself from stepping away from the young officer, my body back to being tense and shaky. I hate that this feels normal to me now. It never used to be. Now it feels strange to feel relaxed.

“Excuse me, but did I just hear you accuse this woman of stealing your car?” the officer asks, swinging his hand to rest on his side arm in what looks like a reflex.

Silence falls over us. Van looks as panicked as I feel. I can’t read Zander’s face, but he hasn’t confirmed the man’s words. That gives me a small amount of hope. Maybe he is the most forgiving man in the world. Jessica lives in Adelaide, South Australia. When she is not writing, you can find her reading, napping or watching excessive amounts of TV. Connect with her on Facebook and Goodreads.

5 Comments to I Stole His Car (Love at First Crime, #1) by Jessica Frances