Indiscretions of a God by Sunniva Dee

Isn't it fucking insane that I can’t get her out of my head?

Title: Indiscretions of a God 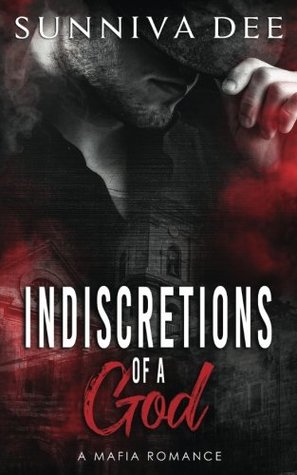 I’m not a saint. That’s not why I left the mafia.
I left because I’m god, because I need no one, and fail at nothing.

I’m Isaias Di Nascimbeni, owner of Lucid, the biggest adult entertainment studio in L.A. Son of Il Lince and second generation Italian in the U.S, I’m dirty rich and adored by highlife as well as lowlife.

Whatever I focus on turns to gold.
On the Richter’s scale of eye candy, I’m a twenty.
I’m a hunter who tests limits.
A warrior who goes shady when the law becomes dreary.

While conducting business at the St. Tatiana,
the most stunning woman I’ve ever seen enters my radar.
Isn’t it interesting that her name is Tatiana?
Isn’t it bizarre that she’s a nun?
Isn’t it wild that she’s unimpressed by me?

Isn't it fucking insane that I can’t get her out of my head?

She doesn’t acknowledge me when I return to her church.
It’s unprecedented. Unheard of. Not happening.
But the hunt is my fetish.
Novice or not, she’s only postponing the inevitable.
Beautiful Tatiana asked for this.
By the time I'm done, she’ll worship me, because now it's game on.

“Isaias.” Tatiana’s fingers brush down my temple and my cheek to my mouth. “I need to leave for about an hour. I didn’t want you to worry.”

I blink off my sleep. I’m on the couch in the living room, waiting for my phone to ring with news about Gabriela.

“I can’t let you leave, baby.” I arch my head backward, following the sound of her voice. Her pretty face hovers over me from behind. I reach up, pull her down to me. She sinks to her knees and cradles my face with her hands.

Tatiana allows me to devour her mouth. My tongue delves in, swiping and suckling her into a moan. It’s heart-battering. I breathe faster, and then her exhales become shallow too. I love that sound.

“It’s not safe out there for you.” I lace my fingers into her hair, extending it around our faces. We’re in a tent of silk and warm sugar. “I’d never hold you back if it weren’t for your safety. Because you need to live on. On and on and on with that crazy beauty you are.”

She puffs a quiet laugh against me. “Weirdo.”

“Tonight, darling. I just need to do this, okay?”

I still her face over me. Nudge it away enough to stare into her eyes. “I’ll come with you.”

“You still think of nuns?”

“My business with the sisterhood doesn’t simply disappear because of an explosion in a church,” she whispers to me.

“Let me at least drive you there.”

I shut my eyes while her soft fingers draw trails down my cheeks. In my adult life, I’ve been touched often and in many ways, but Tatiana’s caresses remain on my skin long after they’re gone.

“Isaias, I’m twenty-seven years old. I’ve been fending for myself for a long time. I’ll be fine, okay?”

I scrunch my eyes shut, knowing I won’t be forcing myself on this stubborn, beautiful, independent woman tonight.

“I’ll be honest with you. I can’t bear the thought of you and Gabriela both out there without my protection.” I pull her down so I can kiss the infinitely soft skin of her throat. “Just let me drive you there. I won’t come in. I’ll, you know, play with my phone and listen to music like some dopy-ass high-school boyfriend until you come out.”

So I let Tatiana go. I stand there on the gravel, hands fisted in my pockets like a douche. At least she accepted my offer of taking the Escalade with the bulletproof windows. She better get used to that, because she’s with Isaias di Nascimbeni. From now on, I’ll make damn sure she never drives anything that can’t repel the bullets of my father’s enemies.

“Fritz,” I shout as soon as she rolls toward the highway. “Get in.”

I walk up to him and point toward another loaner. It’s a joke of a car. Small and grey, it’s unassuming enough to blend in anywhere. I chuck him the key.

“I hold you personally responsible for Tatiana’s wellbeing until she’s back in my arms. Understood?”

I pitch him my Glock too, and I don’t fucking care how unprecedented that is. He grabs it on reflex, gaze humbled as it meets mine. “Mr. Nascimbeni. I’ve got it. I have my sub.”

I stare him down, willing him to tell me it’ll be enough. Because is it? His stare dims with determination. Then he tosses my gun back. I watch it swirl in the air and find my palm in seconds.

I squint, forcing liquid away from my eyes.

“I will get your woman back to you.” 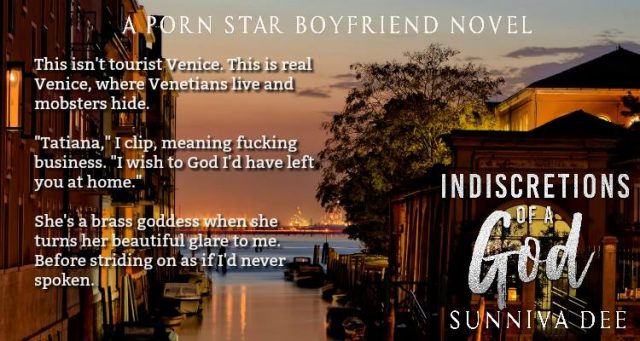 Indiscretions of a God by Sunniva Dee
Rosa's rating: 5 of 5 iScream Cones

"My obsession has got to have a name. Something ending with '-iac.'"

I really enjoyed the story being told in the male POV. Yes, I was inside the head of a God, and it was an unforgettable experience that I didn't want to end. The author took me places I didn't expect to go, and then made me appreciate the journey. She dropped some clues during my twisted travels that had me guessing at possibilities but keeping the suspense revved high until I was about to die before finally revealing the details, assuring that I was captivated and anxious for answers throughout.

But one thing that didn't remain a secret was the depth of feeling between Isaias & Tatiana. They might have verbally sparred quite a bit, but that only proved rather than disproved their connection. It just raised the heat level and made me crazy waiting for them to finally connect physically. Yes, the idea that she was a nun, and forbidden, raised the stakes as he pursued her. "But here she is, a frustrating, beautiful female, my first "no" in years."

He's used to getting what he wants... and he's never wanted anything more than he wants her.

Since I was inside Isa's head instead of Tatiana's the mystery of her thoughts, feelings, and especially her secrets was what drove both Isa and myself to the edge. Wanting to know what was underneath her nun attire and what led to her current career path was a puzzle just waiting to be solved.

Just because Isa chose to remove himself from the mafia didn't mean that he was no longer aware of what was going on in the family business. He was not estranged from his family, he received regular loving calls from his mother and attended weekly family dinners. The excitement of the 'mafia business' and the danger involved in Isa simply having the same last name as his notorious father ramped up the intrigue.

I'm very addicted to this series and can't wait for what comes next. The line forms here... 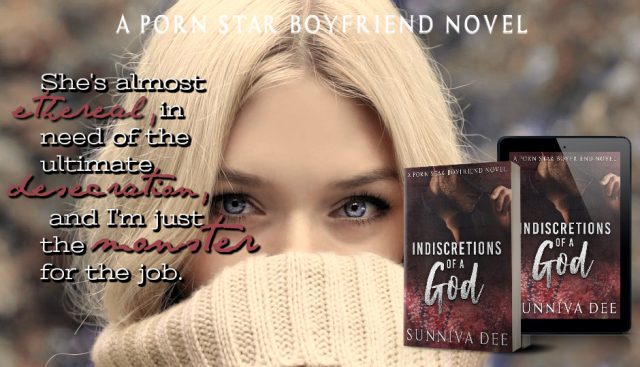 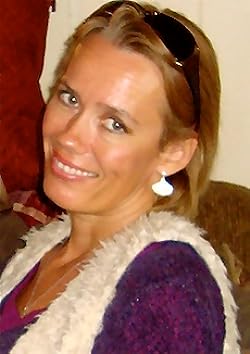 Sunniva Dee is a reader, a lover of everything beautifully written no matter the genre. As an author, she pens flawed characters and seeks the flip side where the soul hides. Once there, she wants to be pulled out of her comfort zone by stories taking on a life of their own.

Sunniva has written paranormal and young adult. She’s committed contemporary romance verging on erotica, and she’s dabbled in supernatural mystery. But her heart
is rooted in new adult of the true kind: young adult all grown up, with conflicts and passions that are familiar to college-aged readers and readers who remember those days like they happened last night.