Looking for Trouble (Nashville U, #1) by Stacey Mosteller 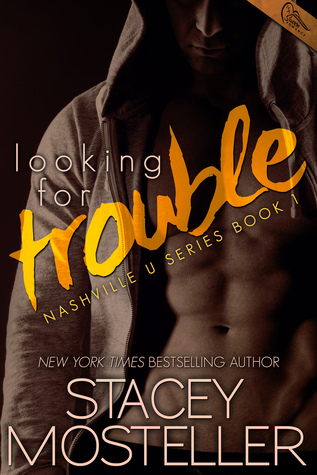 He’s all dirty jokes and curse words, while she’s quiet and shy. She blends into the background, while he is the center of everyone’s attention.

Clay Mitchell never expected to fall in love. Especially not with a girl he’s known all his life and one who’s always been off-limits.

Opposites might attract, but in this case of explosive chemistry, someone’s heart is bound to be shattered.

As enemies become friends and friends morph into more; Clay has definitely met his match.

Before I can get my equilibrium, his mouth brushes mine, so light I almost think I imagined it. I gasp, my back arching and bringing our bodies closer together. The contact makes him gasp too, and our mouths touch once more. This time, his tongue darts out to trace along my bottom lip. My arms tighten further as he presses the top half of his body against mine.

Reality intrudes, and I wonder, should we be doing this? Is this what I want? Then, Clay’s tongue touches mine and every thought in my head evaporates. Unable to focus on anything but the sensation of his tongue exploring my mouth, tangling with my own before he retreats. I automatically follow him, tasting the inside of his for the first time. If someone had told me that the first Mitchell boy I would kiss would be Clay, I would have laughed in their face. But, here I am, Clay’s hands on the bed, on either side of my head, his arms taut as they hold him above me.

The kiss deepens, and Clay’s body moves as he toes off his shoes before climbing up on the bed to hover above me. My legs fall open, letting him move between them. His body lowers onto mine and now we’re touching from head to groin, his erection against the part of me that clenches at the feel of him pressing into me.

Clay’s mouth leaves mine, traveling along my jaw until he gets to my ear where he sucks the lobe into his mouth, biting down gently. My arms go lax at the exquisite feeling, sliding down the side of his neck until my hands find purchase on his shoulders. He tugs a final time on my ear before his mouth moves lower to press a kiss just behind it. My nails dig into his shirt and his body shudders above mine, prompting a delicious feeling between my legs.

Before I can register the motion, he rises up on his knees, grips the back of his t-shirt in one hand and pulls it over his head. He drops it over the side of the bed and pulls me up to a sitting position to grip mine by the hem. Pulling it slowly over my head, he drops it down as well, leaving me clad in only bra, jeans and panties. Clay’s eyes travel from the top of my head to my breasts, where they hesitate for only a few seconds before his hands slide along the sides of my face, tunneling through my hair to tip my head to the side. His mouth descends on mine, and he thrusts his tongue back inside my mouth, more forcefully than before.

This kiss is totally out of my control. His hands on my face move it from side to side until I’m in the position he wants me in. Clay’s mouth is greedy, and he presses it harder against mine until I’m lying back against his pillows. All I can feel is the sensation of his mouth on mine, his bare chest touching my almost bare one. It makes me long for more. I arch my back, struggling to undo the clasp of my bra awkwardly with one hand. Noticing what I’m doing, he takes one hand from my face and runs it down my arm and around to where I’m struggling with the clasp. It takes him less than a second to undo, and then he uses both hands to slide the straps down my arms.

Stacey is the New York Times & USA Today Bestselling Author of Second Chances and Shadows of the Past (co-authored with H.M. Ward), the Nashville Nights, Two Sisters and Nashville U series (coming late 2015 from Swoon Romance).

She is also a wife, mother, writer and self-professed bookwhore – not necessarily in that order! As the mother of three growing boys, her Kindle has become her temporary escape from the insanity of boys, dogs and her husband. Stacey can usually be found curled up with her iPad when she’s supposed to be writing or creating endless Spotify playlists!