Living modestly in a quiet suburb with her grandmother, Caterina Ryan vows to have no connection with her former life in the spotlight.

The door to her past has been locked and the key thrown away.

When a home renovation project brings the irresistibly charming and gorgeous Mateo Cruz into her life, she finds herself drawn back to a dark place.

A place where dreams were shattered and hearts betrayed.

Encouraged to accept a “once in a lifetime” opportunity in the music industry, Mateo seeks to make a name for himself while remaining true to the woman he loves.

Their shared love of music brings them closer than ever, but will the temptations of fame and fortune threaten to tear them apart? 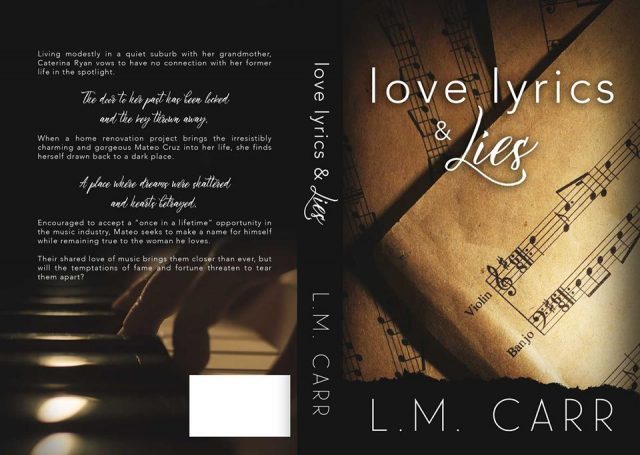 "Don Delisioso is what I call him when he's whispering sweet nothings to me in Spanish."

Love, Lyrics & Lies was my introduction to author L.M. Carr. Being a music lover, I'm always drawn to book covers with musical references. After reading the synopsis, I was too intrigued to not give it a chance. I'm so glad that I did. I now have a new author to add to my stalking rotation.

Caterina is called Cat by her friends. She's very close to her grandma, whom she calls Grams. When Grams took a turn for the worse, Cat left her work in Africa and rushed home to care for her. While Gram's body is healthy for her age, her mind is starting to deteriorate with Alzheimers. But even when she's mentally in the wrong decade, her zest for life and sense of humor are present. She charmed me immediately and I found myself giggling at her sass. Especially when it was directed at Mateo, the sexy contractor hired to build a room addition. The fact that he'd never get the work finished if she didn't quit changing the plans was not a deterrent. Nope, she wanted him to stick around, and marry her granddaughter.

While Cat found it very embarrassing, I found it highly amusing that her grandma spoiled the construction workers with baked goods and showed them photos of Cat, trying to entice them to ask her out. She was determined to find her a husband and would not give up her matchmaking until she did. What she didn't know, was that Cat found Mateo to be a
"Gorgeous man who has had a starring and recurring role in my dreams."

What a strange coincidence that both Mateo and Cat share a love for music. They have so much in common, along with an intense attraction to each other. Is it destiny? Or is it a mistake? Mateo is hiding something from her, and she has trust issues. She cannot abide untruthfulness, and secrets lead to mistrust. Will she be able to look past the obvious, and see the hidden truth? Is his love worth fighting for?

I'm totally addicted to music themes and music industry details and song lyrics are my drugs of choice. I can't get enough of them. The author's writing style is very smooth, and I was impressed by the song lyrics too. I became totally engrossed in the story as the suspense built, anxious for things to work out like I wanted them to, but worried that they wouldn't. I got caught up in the lives of the support characters too, loving some and hating others. I was dishing out advice and shamelessly spying when they forgot to close the door. Did I mention that talking sexy in Spanish is another weakness of mine? I want my own Don Delisioso, and if he can sing, even better. I'm thrilled to have discovered L.M. Carr and will most definitely be looking forward to whatever she has for her readers next. The line forms here... 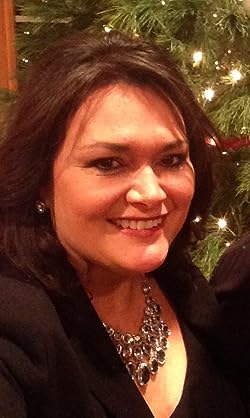 L.M. Carr, author of the Giving Trilogy, the Stones Duet, and two sexy stand-alone novels, is a wife, a mom, an educator, a reader and a writer who lives in central Connecticut with her family. When she’s not sitting at her computer writing, she loves to get lost in a good book or spend time with family and friends.

After self-publishing the trilogy in 2015, a suspenseful romance tale about Mia Delaney and the sexy, arrogant single father Adam Lawson, L.M. penned the Stones Duet in 2016. This spin-off from the trilogy chronicles the story of Army veteran Shane Davis. Left jaded and cynical after his time in the military, Shane moves to Boston and meets a girl who changes his perception on the world around him.

In February 2017, From A Distance was released. An intricate and sexy romance about a motorcycle drag racer and his quest to hide secrets from a woman while the truth unravels before his eyes.
Love Lyrics and Lies, an emotional and angst-filled romance about two people who share a love of music but struggle to balance fame and fortune while maintaining a relationship, will release in December 2017.
Looking to expand beyond Contemporary Romance, L.M. is working on a new romantic comedy.
L.M. Carr is a lover of "Happily Ever Afters" because the world is filled with enough sadness. Reading is an escape in which anything is possible. But like in reality, stories sometimes take you on a journey through Hell before you can reach Heaven.