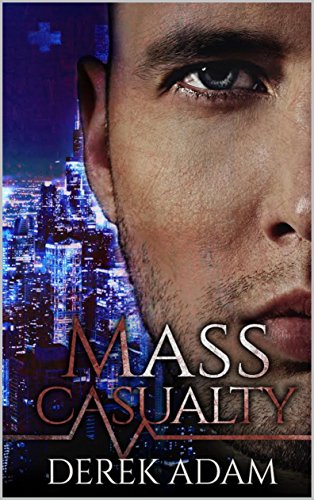 With 12 years under his belt as a highly-regarded paramedic in Detroit, Bobbie Badger has seen it all. Despite a tragic loss that shattered his home life, he has remained a stoic guardian to the city, committed to saving lives.

Until someone, or something, chose him as a target.

As ominous warnings surface, and those closest to him begin to turn up dead, Badger’s only salvation could rest with his estranged wife, Holly - a combat veteran, and sheriff’s deputy.

Will skill, passion, and determination be enough to overcome what hunts him?

This was Derek's debut book into the indie author world and I must honestly say it was truly an amazing way to start! The book is suspenseful, hilarious, and informative. He writes with such passion about the medical field. This story is told through one person perspective,Bobby, and it goes over the span of a few days in his life.

Bobby (Badger) had always being an EMT and taking care of people in need. Until his life was forever changed and he can't stop thinking about the why her. His partner, Hunter, is the comedian to their duo. Hunter helps Badger out by always bickering and bantering with him. As much as Badger complains about it, it keeps him going.

Their day started like any other, one call after another, trying to save lives. Badger starts having recollections of his daughter during a call and it sends him spiraling. Hunter let's Badger's wife, Holly know. They haven't had a very talkative relationship since they lost their daughter. Holly is extremely dominant and can literally bring him to his knees. The friendly, older neighbor needs help one morning and enlist Badger for it. This is when Bobby's life gets even more chaotic and very unexpected events start to happen.

What happened to his daughter? Is Bobby responsible for everything happening? Or is he being framed? If so, by who?

This book was incredible! I honestly learned so much about the medical field from it. Plus throw in the edge of seat events and drink spitting banter between Badger and Hunter, I loved it! I can't wait for what Derek has in store next with Due Soldati, which he is writing with Jillian Elizabeth. Recommended must read!

“Wow. Where to begin? Mass Casualty by Derek Adam has completely blown me away and sent me reeling. I absolutely loved it. It was fast paced, breath taking and made my heart race even long after I'd finished reading.”

“This was Derek Adam's debut novel and I can already tell he is going places. The characters are well developed. You can feel the emotion pouring off of the pages in waves. It kept me flipping until the very end. - J. L. (GoodReads)

“I am not afraid to say I cried at one point, while screaming "WHAT THE HELL?!" At others.”

“So many emotions, Raw Pure unfiltered REAL emotions rip through you as you read this book…”

She was picky as hell when it came to coffee.

I stood nude in the kitchen, hands on my hips, staring at the French press while the coffee steeped.

The handle rattled and the front door opened. Peering around the kitchen entry to look down the hallway, I watched Hunter as he walked in. He didn’t see me, didn’t say anything, just slowly shut the door behind him. He looked to me as he started to make his way toward the kitchen.

He came up short as he rounded the corner into the kitchen.
“Whoa. That’s a penis.” His eyes went straight to the ceiling and darted around, then fell to my face as I stared at him.

Then he looked back down to it, and back up to me before he about faced and sat at the table.

“Is that what you do at home between shifts? Soak your twig and berries in protein and miracle grow or something?” He tossed the paper on the table and looked at me again, shaking his head and making a disgusted face.

“It’s just a penis. You have a penis.” I dabbled in mild amusement. This was the normal shit between us on any given day, and normal felt good right now.

The banter was a good distraction.

“Penis is fine! I don’t have a problem with penis. I am OK with penis.” I poured a cup for Holly while he orchestrated his argument, animating his body as much as possible. He couldn’t help it; his hyper-metabolic ass doesn’t do well cooped up in the rig. Give him open space and he’s like a hyperactive husky.

My mood was improving as I turned back. His eyes fell on my package again and he scoffed.

“We’ve all seen penises we weren’t supposed to see.” I smirked, shrugging slightly to mock Hunter’s inability to apologize save for the dismissive gesture.

Do the Jamaicans know what you’ve done to their Olympic bobsled?”

“It is my house, that you walked into. It’s my penis’ native land. His people roam free here.”

Holly entered the kitchen, sauntering toward me. She took the cup from me with a little flourish and a curtsy, flaring her hips and ass back toward Hunter.

She was also naked.

“Thank you, sir,” she winked at me with a wry smile. She hadn’t called me ‘Sir’ in a long time.

She turned back, giving Hunter a full-frontal shot as we kept our eyes locked on her. “Good morning, Hunter.”

He watched her go by, his mouth hanging open, face flushed red, head slowly swiveling as she passed. Leaning hard in the chair, he craned his neck to get the long exposure. The wooden chair groaned as he tipped it. I was expecting the chair to break under the stress.

Or dump him on the floor.

I watched him mouth, quite expressively, the words ‘OH. MY. GOD.’

He spun in the chair back toward me and recoiled, groaning loudly.

“DUDE… you’re hard! It gets BIGGER?!” he looked back down the hall again, hoping to catch another glimpse of Holly. The look of tragic longing on his face told me that his tranquil view had ended. “I need to come over more often…”

“You wanna go fuck her?” I pointed toward the hallway.
His head snapped back at me so fast I struggled to keep a straight face.

“Too bad. She doesn’t eat pussy.” I walked toward the hallway, guessing at the time given Hunter’s arrival. “Lemmie get changed and we’ll head in.”

“Cool…” he hollered after me. “I’ll just go hop in the back of the van so your… giant… dragon cock can ride shotgun.”

Derek Adam is a retired Emergency Medical Professional and has been a lover of telling stories his entire life, having made the transition from “filthy liar” to “sexy author” about the same time silver hairs started showing up in his face (and other places.)

In the early days, he attempted to write science fiction and high fantasy, but discovered it was more fun to write about people touching other people’s tingle-places (smut is cool.) while mixing in action, explosions, and plenty of WTF moments.

He’s also a gamer, gym rat, snow hater (despite living in Michigan), life liver, stunt double for Hulk, and he considers himself to be aggressively unfancy.