Medicine Man by Saffron A. Kent 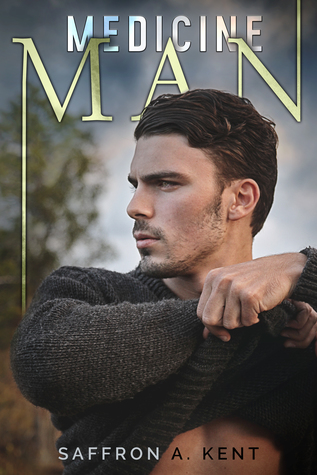 Willow Taylor lives in a castle with large walls and iron fences. But this is no ordinary castle. It’s called Heartstone Psychiatric hospital and it houses forty other patients. It has nurses with mean faces and techs with permanent frowns.

It has a man, as well. A man who is cold and distant. Whose voice drips with authority. And whose piercing gray eyes hide secrets, and maybe linger on her face a second too long.

No, Willow Taylor shouldn’t be attracted to Simon Blackwood, at all.

Because she’s a patient and he’s her doctor. Her psychiatrist.

WARNING: This book discusses sensitive issues including but not limited to, depression and suicide.

“Do you have someone special, Dr. Blackwood?”

Someone you kiss? Someone you grab and pull into a dark alley and press against

I don’t say that but I’m definitely asking that.

doubled. Like his blood is rushing in his veins with an uncanny speed.

With flaring nostrils and a hard jaw, he answers, “No.”

I want to smile. Actually, I’ve never wanted to smile this hard. Ever. His answer calms

me but it also makes me restless to move closer to him. I want to trace my palm over the arch

of his chest and see if I got it right in my dreams.

But I don’t do any of those things. I don’t want him to take away this small concession

Why is he even giving it to me? I’m not complaining. But still.

“Busy with my job. Yes,” he says, all professional-like.

That’s what he is. Professional and distant. Dedicated to his job and fixing people. If

Mass General let him go, then they are idiots.

I’m an idiot, too, in this moment.

Instead of backing off, I want to do something. Something that might crack his cool

façade. Maybe reaching up and messing up his no-nonsense hair.

What would he do? If I did that? If I grabbed his collar and pushed him against the wall?

My eyes drop to his lips, his soft, soft lips. There’s a cleft in the middle of his lower lip. I

want to taste that cleft, dig my tongue in it, wet it, suck on it, bite it.

I watch his lips form the words, and every syllable that comes out of his mouth makes

my need to shake him, kiss him, mess him up, stronger. Stronger and stronger.

takes it off his body. It’s final and smooth, his action. Effortless. As though my touch barely

“But I think you have a point. It’s after hours and I should go… have fun rather than

spending my time with a patient.” He steps back then. “I’ll see you next week. Same time.”

Just lock me in a room and let Saffron Kent read her books to me all day and all night...goodnnessss I get sooo lost in her wordssss!!!

Girlll Medicine Man was soooo fab!!! I really think I read this book intentionally slow so I could soak it all in and fall more in love with the Medicine Man!!!

She is not crazy.
It was a misunderstanding. She didn't mean for the rooftop incident to happen, but there she was, locked away.
Her family thinks she is crazy.
The doctors think she is crazy.
Well that is until she met the Medicine Man. He was the new physician at the facility. She felt he understood her. She felt he could possibly care for her. Willow felt sparks when he was around.
So Willow will continue telling them what they wanted to hear. Cuz she is not CRAZY. And she feels this doctor could possibly be on her side and help her out of this Crazzzy place!!!

"I remember thinking, how can you love your doctor? I mean he's a doctor. A psychiatrist, no less. Someone who prescribes you meds and arranges your life in a series of therapy sessions."

Well this is just what Willow did. She fell in love with the Medicine Man. She had to keep it a secret due to where she was being kept, this was sooo unacceptable, Hell it was FORBIDDEN!!!! Andd here is one of my favorite kinds of tropes-Forbidden!!! Hell yesss!!! Gimmie….Gimmie!!! lol

I gave Medicine Man 5 "you blew me out of the park" iScream Cones!!! Thank you for another AMAZING read Saffron Kent!!!! xoxo Y'all, make sure you go one click on release day!!!

Saffron A. Kent is a Top 100 Amazon Bestselling author of Contemporary and New Adult romance. More often than not, her love stories are edgy, forbidden and passionate. Her work has been featured in Huffington Post, New York Daily News and USA Today’s Happy Ever After.

She lives in New York City with her nerdy and supportive husband, and a million and one books.