One Taste of Angel (Iron Norsemen MC, #1) by Violetta Rand

Title: One Taste of Angel

Their love was the stuff of Shakespeare - two star-crossed lovers from rival MC's, divided by their families' bloody history, but fate has given Eagle and Serafina a second chance. Can the biker and the stripper find their redemption in Violetta Rand's sexy standalone romance, One Taste of Angel?

Eagle
I’ve bled for my club. Taken four bullets. Buried eight brothers in six years. Screwed a hundred women. And only loved one. The one I lost. But there's something about Serafina that reminds me of just exactly what was taken from me. Not just because I can't resist a damsel in distress.

Serafina
To Eagle, I’m dead. Murdered and cremated, my ashes interred at the local cemetery. Part of a past I left long ago to save his life. Seeing him now, touching him again makes me weak, even if he doesn't recognize the woman I've become. Since my escape from Holly Beach five years ago, I’ve lived by my own rules. And no matter how much I love Eagle, he’s not going to break those rules.

One Taste of Angel by Violetta Rand
Rosa's rating: 5 of 5 iScream Cones

Knowing my addiction to MC Romance, this story was dangled in front of me as a temptation that I couldn't resist. I took a chance on an author that was new to me, and now Violetta Rand has a new fan. I'll most definitely be back for more when Once Chance With Starlet (Iron Norsemen MC, #2) is available.

Eagle is the president of his club. Having moved up the ranks in the last few years. It's surprising, considering his grief had him so twisted that his behavior had become reckless and he was a danger to himself. After years of self-destructive behavior he was finally at the point where he was ready to make peace with his past, and move on. He knew that he would never forget, or stop loving his Angel. But maybe there was another woman out there that would be able to fit into his club lifestyle and keep his bed warm at night. Just because he couldn't have the one his heart yearned for, didn't mean he had to be alone for the rest of his life, right?

She's been on the run for years. Hiding from her enemies, and herself. Her heart was broken by her own actions. Her love lost by her own choices. Her memories bittersweet. She ran to save him , but lost herself in the process. Now she's stuck living a lie, trying to move on, unable to forget.

As a reader, being inside the heads of both characters was a head-trip. I knew things about each that the other didn't. It was killing me to wait for the cat to be let out of the bag. I was dying of anticipation and excitement, and glued to my kindle, knowing the the next page would be the one where it all came together. The author kept me on the edge of my seat with the secrets and suspense. And did I mention the passion? OMG! It was H-A-W-T! All the things I enjoy in a good MC Romance was present. I dug the club business and the villains that gave me someone to hate, and the brothers that gave me someone to hope the next book was about. Fortunately the author gave me a sneak peek, and I know who it will be. The line forms here...

“You owe me,” I say as I close the distance between us. “I’ll take a kiss as payment.” Serafina looks lost, but she doesn’t resist when I reach her and cup her face between my hands, pulling her closer, lowering my mouth over hers.

I pause for a brief moment, looking her deep in the eyes, waiting for that spark to ignite into the inferno I know is already burning strong between us. “D-don’t,” she half pleads.

But I do. Her lips part and my tongue strokes against hers. The fire is immediate and all-consuming. I tangle my fingers in the length of her hair, angling her head for better penetration, my tongue embedded so deep I can feel the back of her throat. The way she tastes only inspires me to want to kiss and lick that hot wet pussy I saw earlier. There’s nothing ordinary about her. I swallow her moans, running my hand up and down her arm.

Kissing her long and deep only reinforces the attraction—makes my cock throb and ache like I haven’t had a piece of ass in months.

“No.” She pushes me away, wide-eyed and frazzled.

“Serafina,” I chant her name like a holy vow. “You can’t deny what we’re feeling.”

“Don’t call me that! There’s no way in hell you’ve earned that right.”

“What’s that supposed to mean?”

“I don’t want you to touch me again.”

Why? Chemistry like this doesn’t happen too often. Almost never. And I’m not prepared to let it slip through my fingers without a fight, or at least a plausible explanation. “Are you married?”

I never thought to ask before.

“In a committed relationship?”

“You’re way off, Eagle.” She hugs her center, laying more bricks in that defensive wall.

“Enlighten me, then. I have all night.”

I smirk at her judgmental tone. “Do you think I sit around on my ass all day?”

“That prez patch says you don’t have to work hard to get what you want.”

“For a girl who claims not to know me, you’re pretty free with your opinions.”

“Yeah, well, I’ve been around enough to understand the inner workings of an MC. Not much difference between your rules and a regular company, now is there?”

I rub my chin, liking the hotness of her smartass mouth. The more she talks the more intrigued I get. “Maybe not, pretty girl, but I guarantee my ideas are a lot more innovative than something some asshole in a suit will think up in his corner office.”

She laughs. “I doubt it. We’re standing in a bedroom inside the home of one of the most notorious cartel lords in the United States. I’ll bet on the guy in the suit.”

“Come here.” I grip her shoulders and yank her close again. Our lips meet for a more desperate and demanding kiss. This time, her tongue wrestles mine for control. Bad. And for a girl who didn’t want anything to do with me ten minutes ago, she sure changed her mind.

I break the kiss and tip her chin upward. “I want to fuck you, Serafina.”

“No.” She gives me a defiant pout, but I can see through her denial. Her eyes are filled with hunger. “I need a drink.”

I need a goddamned bottle of tequila—and a cold shower. “What do you want?”

Unable to deny that beautiful face anything, I’ll get it for her. But first . . . I move quickly, gathering her clothes and shoes, and stuff them in the suitcase she opened earlier. Then I zip it up and carry it to the door.

“You can’t leave me here with nothing to wear. 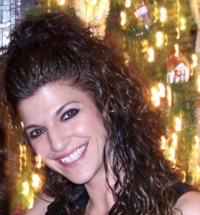 Raised in Corpus Christi, Texas, Violetta Rand spent her childhood reading, writing, and playing soccer. She lives in Anchorage, Alaska and spends her days writing evocative contemporary and historical romance. When she’s not reading, writing, or editing, she enjoys time with her husband, pets, and friends. Violetta is the author of Viking Hearts.