Ace of Hearts (The Cursed Ravens MC, #1) by Chantal Fernando 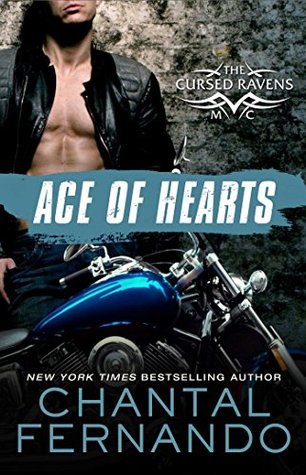 Erin Dawson had the perfect life growing up in a perfect home with a perfect family. Her parents gave her and her sister everything a child could want. But after learning that the man she’s called “dad” her whole life isn’t actually her biological father, Erin is determined to find the man who is.

Armed with her original birth certificate, she finds her father, but begins questioning if her mom had been right all along to keep this information buried. It turns out he is the president of a motorcycle club, which could not be further from the life Erin leads. But, she’s determined to get to know the man who she gets her striking blue eyes from. Despite getting what she wants and finding her biological father, it’s the slightly older, much rougher but incredibly sexy biker Ace that catches Erin’s eye.

As the new “princess” of the Cursed Ravens, Erin is learning a whole new world, but her father has made it clear she is off limits. Will Ace follow his President’s orders or will he put his heart ahead of his duty? A sizzling tale of family and passion, Ace of Hearts features Fernando’s signature “snark and sass” (Booklist) and is perfect for fans of Kristin Ashley.

“I wish your personality was as nice as your ass.”

I’m a big fan of the author’s Wind Dragons MC series so needless to say seeing that she was starting a new MC series had me very excited. I really enjoyed this lighthearted story. Yes, you read it right, this isn’t one of her deep, dark, twisted stories with damaged characters. This is told in Erin’s POV, so we only get her take on things. She’s a 21 yr old good girl who just learned the man she was raised to call Dad was actually her stepfather. She accidentally discovered her birth certificate and saw an unfamiliar name listed as her biological father. When she confronts her mother, she learns he’s a biker.

So, get ready to be entertained by the good-girl-gone-bad as she is exposed to the motorcycle club lifestyle. Don’t get me wrong, she’s not timid or quiet. She’s sassy and without a filter. I found it hilarious that she kept speaking her thoughts out loud without realizing it until someone would answer her. She’s always kinda felt like the black sheep of her family and it becomes more understandable after she meets her father, the president of The Cursed Ravens MC. It explains why she is so different from her sister in both appearance and attitude.

Seeing the club members through her eyes as she tries to figure things out is fun. She pretty much became the club princess as soon as she stepped foot through the clubhouse doors. And that doesn’t exactly go over so well with the other females who don’t want the competition. After being deprived of her father’s attention for her whole life, she’s not happy about having to share him with other women. And when she looks across the room and sees Ace for the first time, with a club whore on either side, she doesn’t like that either. At that point, she doesn’t even know his name, but he has her attention.

Ace knew that she was trouble with that first look. But what he wasn’t expecting was to learn that she was the daughter of his president and off-limits. As we all know, being told something is forbidden makes it that much more tempting, right? Get ready for some serious sexual tension as these two lust after each other. Her internal dialogue was priceless, and one of my favorites was, “He used the word respect, but all I want is some fuckin’ disrespect from him right now. Until we leave the bed, at least, then I can go back to being his princess.” Will they risk the wrath of the president to be together?

Woo Hoo! Meeting this new club of badass bikers was a treat. The witty banter was non-stop and Erin joined right in with them. I couldn’t stop smiling as I read their encounters. As always with the beginning of a new series, the author has to lay the groundwork and let us get to know the characters. I fell hard for most of those sexy bikers and can’t wait to spend more time with them. The line forms here…