Title: Bad for Me 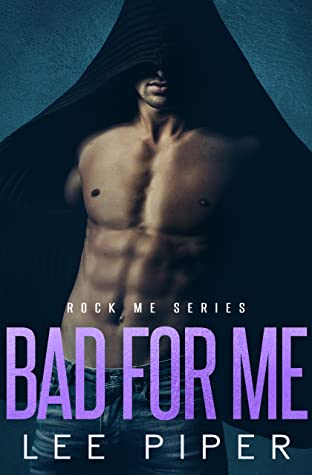 I’m not supposed to crave the drummer of the hottest new rock act or notice his tortured green eyes.

I shouldn’t care that he shies away from everyone. I’m a journalist and I have one job to do.

But selling his secrets for tomorrow’s headlines would not only ruin him, it would destroy me.

Yesterday, I had a future. Today, I have a choice—career suicide or protect a drummer who hates me.

Girl, I felt it too! Confession…when I first met the drummer in a previous book…I had no clue what was simmering below the surface. Damn! He’s all dark and deep and damaged. I’d almost say beyond repair, but that was before he met her.

She’s the last thing he needs at this time in his life, at least that’s what he thinks when she shows up. His body has other ideas. It wakes the hell up. He fights the pull and pushes and pushes and pushes her. He has secrets that he wants to be kept far away from the beautiful journalist. He insults her and provokes her and guess what? She’s badass and refuses to run away with her tail between her legs.

Are you intrigued yet? Good. *patting myself on the back*

Bad for Me was oh so good for me. Exactly what I needed to take my mind off my life and allow me to escape into an exciting world with a rude rock star and a strong woman who could see past his bad behavior. His painful journey was heartbreaking and inspiring and the author kept me on the edge from start to finish, hanging by a thread, knowing what I wanted to happen and worried it wouldn’t.

I’m loving the Rock Me series soooo much. I know there’s at least one more, and I can’t wait to spend time with him and the woman that convinces the manwhore to change his wicked ways. The line forms here…