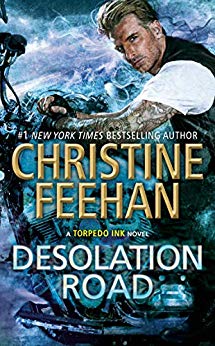 Take the ride of your life with the Torpedo Ink motorcycle club in this thrilling romance novel from #1 New York Times bestselling author Christine Feehan.

Torpedo Ink is Aleksei “Absinthe” Solokov’s whole life. They’re his brothers, his family—his everything. But that doesn’t stop him from wanting something that only belongs to him. That’s why the tough biker has spent the last six weeks at the library, reading every book he can get his hands on and watching the prim and proper librarian who makes his blood rush.

For the past six weeks, Scarlet Foley has been fantasizing about the handsome, tattooed man whose eyes follow her every move. She senses he’s dangerous. She wants him to get close enough to touch. She wishes she could let him know the real woman, not the one she pretends to be. But Scarlet has a plan to carry out, and she can’t afford any distractions.

Absinthe is well aware that Scarlet is hiding something. She’s a puzzle he intends to solve, piece by intoxicating piece….

“She was raw fuel for survival when he thought there was nothing left for him.”

Each new book in the series becomes my favorite…until the next book in the series. Absinthe broke my heart, but so did the others. Torpedo Ink series is a mindblowing and heartbreaking series. But it is also beautiful and inspiring. Once you start reading you’ll be as addicted as I am.

Not only are the club members broken and badass, but so are their partners. They’ve all been through hell and come out the other side. Unfortunately, they keep going back to fight their demons through their memories and nightmares. But they are never alone, their brothers and sisters always have their back.

Absinthe never dreamed he’d find a woman who could deal with his past or his present. He wasn’t looking for her when he happened upon her at the library of all places, wearing a tight pencil skirt and those sexy glasses that made his body wake up. Her red hair and green eyes added to the perfect package that kept him tied up in knots in the place that usually brought him the most relaxation. He’d never wanted a woman as he did her. She inspired fantasies that he was saving to share with her when he finally made her…his.

Scarlet wasn’t looking for a man. It was actually the last thing she needed to distract her from what she’d spent years planning. But it was impossible to ignore the gorgeous man. Tall, tattooed, muscled, and most intriguing was the speed with which he could read the books he went through while hanging out at the library. How was she supposed to work when she could feel his eyes on her? For the first time, she was having fantasies that had nothing to do with her plan.

Lordy, this story is dark…and tragic…and sad…and sweet…and sexy. It pulled my heartstrings and stretched my imagination. This is the only series I’ve read by this author, I love it so much I’m tempted to try her paranormal books. I can’t wait for more Torpedo Ink, there are so many amazing characters that I want to get to know better. The line forms here…