In It to Win It (Wynn Hockey, #2) by Kelly Jamieson

Title: In It to Win It 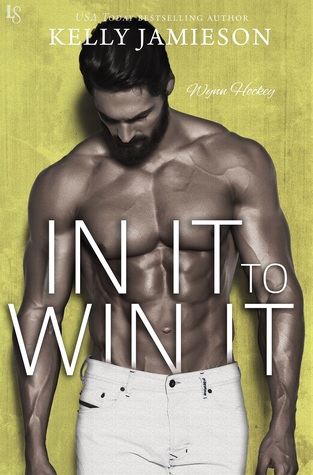 “Kelly Jamieson is an auto-buy for me.”—Carly Phillips

JP Wynn: I admit, I’ve made some bad choices—on and off the ice.
Now all I want to do is show my team I can control my emotions while I’m playing and redeem myself with my family, especially with my brother, Théo.
I hate that I hurt him and I’m determined to stay out of trouble.
But the hot bridesmaid at Théo’s wedding is tempting me into another bad decision.
A little flirting and a hook up with Taylor seem harmless . . . until Manny Martinez jumps me on the dance floor and starts beating the crap out of me.
And just like that I add one more bad decision to my résumé.

Taylor Hart: I always thought hockey players were hot. Now I think they’re crazy.
Manny broke my heart when he got traded to another team and left without even a goodbye.
Then he showed up at my best friend’s wedding. All I wanted to do was show Manny that I was over him.
And the groom’s sexy brother, JP, seemed more than willing to be my distraction.
But after the way everything went down, I want nothing to do with any of them.
Easier said than done. Especially when Lacey’s new brother-in-law is always around. . . .
And I keep thinking about the wedding night, when we snuck away to his room for the best sex of my life.

USA Today bestselling author Kelly Jamieson’s epic Wynn Hockey series can be read together or separately:
PLAY TO WIN
IN IT TO WIN IT

“Not to brag, but I don’t even need alcohol to make bad decisions.”

This story was my introduction to Kelly Jamieson. Yes, it was the cover that got my attention and I decided to give her a chance. Though it’s the second in the Wynn Hockey series I read it as a standalone. After meeting so many amazing support characters I can see how a whole series could evolve.

JP is a good guy that keeps making bad decisions that follow him. It’s a good thing that fighting in hockey is accepted, but it’s not always the best way to rid yourself of frustration since penalties are often a result of impulsive actions, right? Nor is hurting his family high on his list of proud moments. He’s got a lot to make up for and he’s determined to get a handle on his emotions and make better choices.

Taylor isn’t looking for another hot hockey player at her best friend’s wedding, but that’s what she finds in JP. Resisting his charms is impossible and she later ends up wishing she had after her ex shows up and makes a scene. She tries to avoid him, but that seems to be impossible as well since her bestie is married to his brother.

And did I mention Byron? I think I love him most of all. Wait till you meet him! I really enjoyed this sweet story full of misunderstandings and mishaps that kept me smiling. I also enjoyed the hockey details and the Wynn family drama. “Blood may be thicker than water, but it’s not thicker than hockey.”