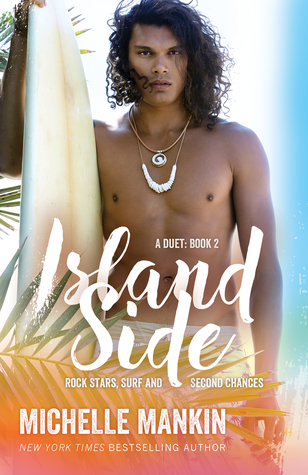 Hollie Lesowski is a beautiful young actress locked in a legal battle with one of the most powerful and feared directors in Hollywood, a man who betrayed and hurt her, a man she mistakenly believed was her father.

Maximillian Cash is her bodyguard, a blond, blue-eyed giant sworn to protect her. Gentle despite his imposing presence, he seems to be just right for her. But can she trust him with her deepest secrets?
Diesel Le is a rock star in her sister’s band.

Devastatingly sexy and annoyingly arrogant, the former pro surfer from Hawaii delights in driving her and everyone else crazy. So, why does she have to continually remind herself to stay away from him?
Two uniquely handsome men tempt her. Both want to make her their own. But one is her employee, and the other is a confirmed player.

Will she be swept away by temptation?

High Tide and Island Side is a heart-twisting, gut-churning, page-turning, coming-of-age duet. It is a triangular second-chance love story with two compelling alpha males but no cheating. Romantic and suspenseful, it sparkles with the glitz of Hollywood, sizzles with the tropical heat of Hawaii, and steals your breath at times, but it will also make your spirit soar.

“We might burn down the night if we were ever together, but I knew I would get hurt.”

Michelle Mankin pulled out all the stops with this duet. She blew my mind and left me gasping like a guppy at the end of High Tide. Saying I was excited to read Island Side is a huge understatement. While I might be envious that Hollie had two extremely sexy men vying for her attention, I had my sights set on one in particular that I hoped would win her heart.

I really enjoyed my visit to the ‘island side’. It was very educational and beautiful in my mind as I experienced things right along with the characters. I kid you not, I’m seriously craving some fresh fruit! 🍍 🥥🍌 I might not be brave enough to ever attempt surfing myself, but I had a blast riding the waves with the characters. 🏄

One of the things, of many, that I especially love about this series are the support characters. Regardless of which one the story focuses on, the others are present at some point and there’s never a shortage of love, support or witty banter. Another aspect of this story that really got my engine revving was the suspense factor. There are mysteries to unravel and a few jerks that I’d like to teach a lesson in a way that I could only get away with in fiction. I’ll let you figure that one out. 😉

As I’m sure you’ve figured out, I can only share what I enjoyed and how it made me feel, so as not to spoil the experience for you. I floved it, start to finish. There is so much to love. Did I mention the rock stars? Yeah, I’m addicted to them and the Dirt Dogs do not disappoint. I also have to give the author a shout out for some amazing lyrics (though she gives a sexy rocker the credit). I would love to visit OB to hang out with them, watch them surf and listen to their music…sigh. 🎵