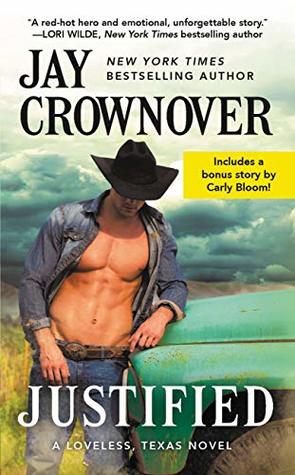 Case Lawton comes from a family of criminals. So as the sheriff of Loveless, Texas, he’s determined to do everything by the book–until he’s called to Aspen Barlow’s office after a so-called break-in. The last thing he wants to do is help the woman who cost him custody of his son. But Aspen isn’t the heartless lawyer Case remembers, and he starts to question his long-held grudge…

Aspen is scared for her life, and Case is her last hope for protection. But to get him on her side, she’ll have to reveal the painful truth from all those years ago. Now, as they work together to track down a dangerous criminal, Case and Aspen learn to trust each other. And as the threats escalate, it becomes clear there’s a thin line between love and hate… because there’s nothing Case wouldn’t do to keep her safe.

Includes It’s All About That Cowboy, a bonus novella by Carly Bloom!

“He’d always been a bit of a heartbreaker, but now he was something beyond that. A heart destroyer, or maybe even a heart annihilator.”

I fell in love with the author’s Marked Men series years ago so I knew before I started reading Justified that she was gonna bring some #Love to Loveless, Texas and I didn’t want to miss out. Um…did I mention there’s a #SexySheriff? Even his name is sexy…Case…sigh. ❤️

Well, all that was before I met Case. I have to confess he did not make a good first impression with me. He was an #AlphaAsshole and did not treat my girl Aspen so good, at least not when they saw each other again as adults. But, being inside her head during her teenage crush over said asshole kinda gave him some brownie points for being nice to the new girl at school. When everyone else was being mean, he was kind. Which I’m sure is the only reason his later deplorable behavior didn’t totally ruin her #CaseCrush. However, I had some colorful words for the rude asshole and was determined to make him earn my favor.

The more time I spent with Aspen the more I liked her. She’s a tiny spitfire who is a force to be reckoned with in the courtroom. Too bad Case didn’t hire her to represent him, because going against her did not bode well for his case. And once she proved that to him, she became his enemy, which did not bode well for her crush. Their animosity went on for years and they avoided each other as much as possible. Until he had to respond to a break-in and act his age. He was very professional as he handled the crime scene, his skill showing, with a side of asshole. His grudge against her was evident, but it was his job to protect her, right?

Yeah, that’s when I stop to grab some popcorn and wine. He can’t avoid her now. While I’m waiting for the sparks to fly between them, in anger and chemistry, the suspense is building too. That’s when I stop to turn my fan up to a higher setting. Did I mention that she’s keeping a secret? So, not only am I waiting for them to fall in love, I’m trying to figure out who the bad guy(s) is, and I’m worried about the secret that I know…and he doesn’t. Whew! I’m exhausted now.

I really enjoyed Justified and I’m so excited to go back to Loveless, Texas. There are some very colorful and sexy characters that need more of my attention and I can’t wait to give it to them! The line forms here…