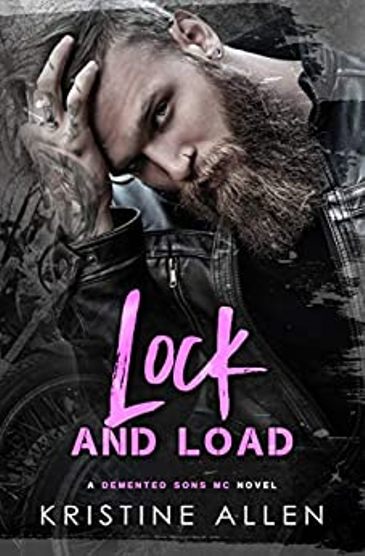 I’m the Sergeant-At-Arms for the Demented Sons MC. A year ago my life went to shit, and every priority I ever had changed. Being a single dad on the run was never on my radar, but that was the hand I was dealt.

I didn’t think shit could get worse.

Then fate dumped a raven-haired beauty in my lap, and all hell broke loose.

Trying to keep my two-year-old daughter and a hot mess of a woman alive while still protecting my club threw my adrenaline into overdrive. Strung tight, danger coming at us from all directions, I faltered…

That was the only excuse I had for what happened next.

“He was absolutely, positively my greatest and worst addiction.”

This is my second Kristine Allen read. First a rocker and now a biker…sigh. Those are my top tropes and now I’m addicted to her writing. She seems to be reading my mind and giving me exactly what I enjoy the most, but better than I hoped for. And did you see the cover? IKR? I’m sure I’m not the only one with a bad case of #CoverLust.

Ladies, let me warn you, your ovaries are in danger of exploding when you get a taste of this sexy, tattooed, badass biker with his little girl. She’s beyond adorable and has him along with his brothers wrapped around her little finger. She had me smiling so hard my face hurts.

He might consider the raven-haired beauty a hot mess, but I beg to differ. I think it’s him that ends up being a hot mess when he meets her. She’s stunning and sexy and doesn’t cower when he acts like a jerk. She throws her sass right back at him and leaves him with more than he bargained for. He claims he wants nothing to do with her… but it’s a lie. What fun I had waiting for him to give in to the lust she makes him feel. Their chemistry is sizzling!

Since I’m late to the Demented Sons MC party, I read Lock and Load as a standalone. But, I most definitely plan to go back and read the others. There were quite a few characters that I’d like to get to know better. The line forms here…