Married in Michigan (Fifty States of Love) by Jasinda Wilder 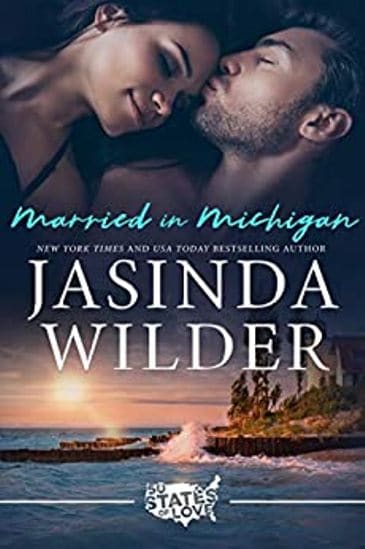 Cleaning up after playboy Paxton deBraun is a full time job.

His family is worth billions. They are the elite. They influence politicians. They’re the power behind the power. Paxton is their golden child, wealthy in his own right, a rising star in Washington DC’s political scene…a 21st century Jay Gatsby, prone to throwing lavish, expensive, wild, and destructive parties.

I’m a housekeeper at a hotel owned by his mother, Camilla deBraun, and I’m sent in to clean up after such a party.

What I wasn’t expecting was to find Paxton naked in his bed, passed out and breathtaking even hungover.

Even more unexpected is the proposal bombshell he drops on me: Marry him.

A man I met once, a golden god, richer than belief, gorgeous beyond comprehension, and arrogant beyond fathom.

Me, a hotel maid working three jobs to make ends meet…Marry him.

It’s supposed to be fake, more of a business agreement than marriage proposal.

Only…it turns out there’s more to this sexy billionaire than meets the eye.

“Here we go—I’m gonna kiss you so hard your panties will all but fall off of their own accord.”

I loved everything about this story, it was my idea of a modern adult fairytale. At least in my mind, I never got to see what went on behind closed doors with Cinderella and Prince Charming, and I bet The Beast was all kinds of alpha with Belle, right? Who knows, but it’s fun to imagine. In Married in Michigan the author doesn’t hide the good stuff, she gives her readers the full experience.

She’s a hotel maid expected to clean up after what looks like a bomb explosion. She’s seen bad before, but this is even worse. No words. I had to pick my jaw up off the floor and I was just reading, not cleaning it up. Lordy, she definitely didn’t get paid enough for the work she did. True, I guess getting a glimpse of the goods was a bonus, and it was a very big one, but still not enough as far as I’m concerned.

Their first meeting was memorable, that’s for sure. And don’t get me started on his mother, her boss. She’s a piece of work and another reason I wouldn’t want that job. At least I didn’t think so at the beginning. Though I have to confess, he did win me over later. He’s actually more than just Party Paxton once you look behind the hangover. I was totally encouraging her to take him up on his unexpected offer of marriage…just imagine the perks. And let me tell you, I’m not just talking about the billions. 😉

Not only was this story funny, but it was also heartwarming as well. I might have even shed a tear or two. There’s a lot more story than what you read in the synopsis, but I don’t want to spoil it for you so I’ll just encourage you to give it a chance. You won’t regret it. I’m still smiling…sigh.