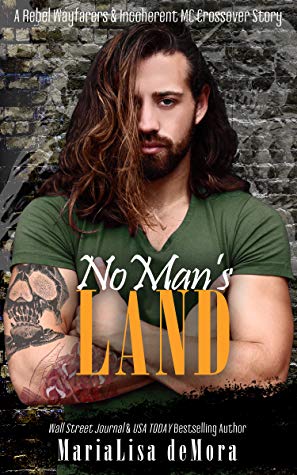 Members of the Incoherent MC are no strangers to the pull and tug of disagreements with other clubs in their territory. But waking awash in the bloody aftermath of war’s opening salvo wasn’t typical.

After the slaughter of Hitch’s brothers, he has two goals.

One, keep breathing long enough to avenge them.

Two, learn all there is to know about the angel who saved his life.

Talia had successfully wedged her way into the fringes of her brother Ewell’s motorcycle club despite his attempts to keep her out. Her EMT skills come into play more often than she’d like, and when the IMC, a friendly rival club, asks the Jailbreakers MC for a favor, Ewell—and Talia—can’t turn them down. Even if the aftermath means Talia could be drawn into the maelstrom of war.

“Talia soothed me in ways I didn’t recognize, couldn’t put a name to if I’d tried—”

Are you ready for my one-word description of the instant connection between a badass biker and the angel who saved his life? SWEET. I know, not what you were expecting, right? But, damn. His first glimpse of her makes the scary biker speak with soft words and heartfelt emotion.

I was a goner for him from the get-go. If I was Talia, I’d be saving him too… for myself. That is if I could concentrate on medical lifesaving procedures while swooning….sigh.

Oh yeah, I guess I should tell you about the danger too, huh? That’s how this story ended up being a crossover. There are bad guys out there doing so much damage that the good guys (as good as an outlaw motorcycle club can be) are supporting each other. I can’t help smiling, even during the suspenseful scenes, when one of my favorite characters show up.

This tale might be on the shorter side, but it’s not lacking anything. It’s sweet, sexy and suspenseful. And best of all, it left me wanting more. The line forms here…