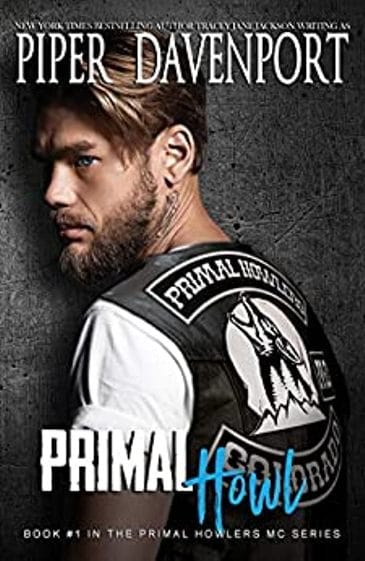 Orion
I’m the oldest son of MC royalty. My father founded the Primal Howlers and he expects me to wear his patch one day. The problem is, I don’t know if that’s what I want. Lately, I couldn’t give two sh*ts about anything.

Raquel
I moved to Monument, Colorado to write my thesis and get some much-needed distance from my overbearing family. What I didn’t expect was to find is myself hung up on a biker who appears to have nothing to lose.

I, however, have everything to lose and I’m worried Orion just might be my downfall.

“I was short and curvy, but I was in shape. I mean, round was a shape, technically.”

What a fantastic start to a new series! I’ve been so excited to dive into the Primal Howlers MC. I love it when I’m able to dive in at the beginning and not feel like I’m late to the party when it comes to a series. It’s so exciting to meet new characters and get the feel of a new MC family. The Howlers are going to steal your heart just like they did mine. The licking rule does not apply here. 😋

Raquel is my new girl crush. I love that she has no filter and lets her sass fly free. Being from a biker family she is not intimidated when she runs into Orion and his brothers. Nope, she doesn’t even try to hide her lust. She had me giggling and giving her a virtual fist bump almost immediately.

Orion has been struggling lately with his place in the club. He knows his father expects him to take over as president eventually, but is that what he wants? However, when he runs into Raquel there is no doubt in his mind at all that he wants her. She gives him something new to focus on and somehow everything else becomes clearer as well.

I really enjoyed the witty banter between the characters that kept me very entertained. And there was also some ‘club business’ to keep me on the edge of my seat. I know that women aren’t allowed to know about this, but that’s one of the benefits of dual POV, right? Being inside Orion’s head had me sittin’ in church right next to him. While Raquel was afraid he might be in danger…I knew he was. And yeah, I might as well confess to being a virtual voyeur as well. I did not close my eyes, I just fanned myself and watched and listened and wiped the steam off the shower door when my view was obstructed. 😉

The final verdict? I loved it from start to finish. I’m already addicted to the series and I can’t wait for Primal Need! The line forms here…