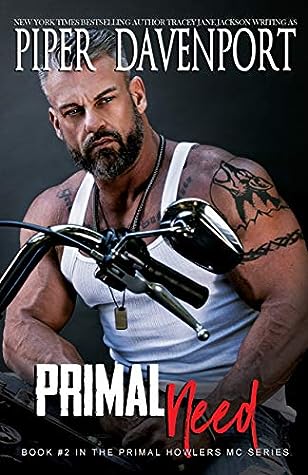 18+ for language and sexual situations…

Sundance
I’m the president of the Primal Howlers out of Monument, Colorado. My wife was taken from me ten years ago, leaving me to raise our three children alone. I’ve been diagnosed with a disease that I’m not sure I’ll beat, and to make matters worse, I’m now in the crosshairs of a rival club.

But enough about the upside of my life, because Wyatt Bates just walked into it, her confidence enough to rock my world, but her sweetness might just be the end of me.

Wyatt
I’ve lost almost everyone who ever loved me. Cancer took them all, so the last thing I’m looking for is a relationship that will break me again.

Then I meet Thorne “Sundance” Graves and my world is turned on its head by the sexy as hell biker. Now I must choose between a chance at love or the risk of complete devastation.

“—if this woman thought she had a snowball’s chance in hell of warding me off, she was gravely mistaken. Pun intended.”

Woo Hoo! This series is more than off to a good start, it’s amazing! Once I started reading Primal Need I lost all track of time and sorta forgot to go to bed. Yeah, that alarm clock was definitely a wake-up since I hadn’t gone to sleep yet. No regrets, though. I enjoyed every single second.

Sundance is the President of the Primal Howlers MC. He’s also a single dad after losing his wife a decade ago. His children are now old enough to drive him crazy and push him to take care of himself. So, he’s fighting to live, for them. And then he meets her… his second chance. If only he can convince her he’s worth the risk to her heart.

Wyatt (coolest name ever, right?) is very independent. After losing most of her family to cancer she’s used to depending on herself and nobody else. When she runs into Sundance he makes a lasting impression and she can’t seem to shake him. Not that she really wants to, if she’s honest with herself. “—I kind of wanted to follow the veins in his arms with my tongue. Just to see where they led. Mostly because I knew they’d lead to delicious places.” Me too! Did you see the book cover? Excuse me while I grab a fire extinguisher. 🔥

The lust is working both ways and neither of them stands much of a chance of resisting the other. But, what fun it was to watch them try! And then, there’s the rival club that is causing problems. With secrets and betrayal behind the scenes just waiting to create chaos, the suspense takes it to the next level. I could not tear myself away, I devoured Primal Need like a squirrel with nuts. I’m really loving this series, I don’t know who will be featured next, and I can’t wait to find out. The line forms here…