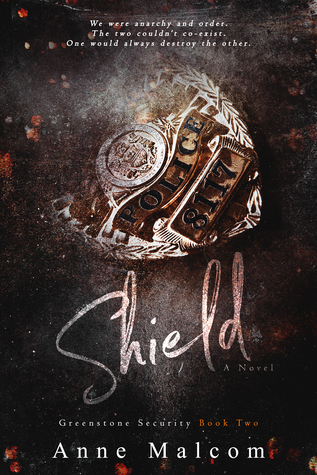 My name’s Rosie and I come from a dynasty of sorts… the Sons of Templar, maybe you’ve heard of them.

I just happen to be the daughter of one of the founding members and am the sister of the current president.

The fact I’m a woman means I don’t wear the patch, but it’ll never change the fact that I’m a Templar by blood.

We’re known as royalty in the outlaw world. Though, the dynasty is dancing on the right side of the law these days.

That doesn’t mean that the law and those who enforce it are friends.
It will remain the one constant in my tumultuous life. The one rule in our law-free existence.

Befriending the law and those that enforce it is a betrayal.

Which means me being one half of a doomed love is that much more comical when he’s a cop.

Before I went and ruined it all.

Before he shattered that shield he wore to protect society in order to protect me.

He saved me and I damned him.

I damned myself too, but to be honest, I was damned long before that.

“Running was the easy part. It was coming back that was the bitch. Nothing went away while you were hiding; everything stayed exactly preserved, like a fossilized demon of all your mistakes.”

Rosie, Rosie, Rosie…I love you. ♥ You’re badass and beautiful and broken. You’re my hero. So much pain and still you put everyone before yourself. You don’t let the darkness keep you from loving and protecting those that are important to you. And, you’ve got the most awesome family, Sons of Templar. They would protect you with their lives if only you’d tell them your secrets.

Rosie is Lucy’s bestie, and the two of them together is a recipe for trouble of the best kind. I admit I’ve been excited to spend more time with these two and the other women that make up their inner circle. They’re all badass and funny. The only problem is that Rosie runs when life gets too hard and the pain gets too much. She’s breaking her own heart when she leaves her home in Amber, but staying is just as painful. Their love is forbidden. Different time, different life, we woulda been perfect.” But nothing could keep her away when her family needs her, and that includes her soul sister, Lucy.

I was so excited for her to return and see him again. He’s changed. He’s different when not standing behind the shield. It’s always been the symbol of what stood between them. But, she feels responsible for him walking away from what she believes he was meant to do. Her guilt keeps her from listening when he tries to get past the walls she’s built up to protect her heart.

She fell for him when she was only five years old. He’s always been off-limits. Maybe that’s why they wanted each other so much. My heart fell with them and broke right along with theirs. “You’re not a sinner,” he murmured. “And I’m not a saint.” I’m exhausted from wishing on stars and shaking my Magic 8-Ball. 🎱

Well, as you’ve probably already figured out, trouble follows Rosie. Of course, there’s danger and suspense involved and plenty of badass bikers and sexy alpha guys on the security team. “I totally got why Greenstone was the most popular security company in LA. You threw a rock in those offices and it would hit a hot guy.” No worries, I’m still searching for their website to verify this information…in person. The line forms here…