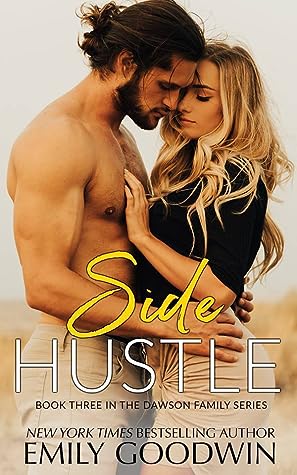 When Scarlet Cooper takes a new job as a nanny, she assumes she’s going to work for the rich couple who hired her. But instead of pulling up to their million-dollar estate, she finds herself on the front porch of a humble farmhouse, looking into the eyes of dark and brooding single dad, Weston Dawson.

It’s bad enough that Weston doesn’t have a fortune to charm out of him, but he’s also a cop. After marrying his high school sweetheart only to have her up and leave weeks after their baby was born, Weston has sworn off women for life. All that matters now is taking care of his son, Jackson.

If anyone can break down the tough exterior of the former soldier, it’s Scarlet. But just when she’s close to getting exactly what she wants, she’s faced with a whole new challenge, which just might be the biggest con she’s ever pulled: pretending she doesn’t love him.

Side Hustle is a standalone single dad romance and is the third book in the Dawson Family series.

“Is the con artist getting conned? Is the universe finally catching up to me, and this is its way of giving me the middle finger while laughing out a big fuck you?”

It was that cover…sigh. Yeah, I admit I kind of have a thing for a man with a man bun. It got my attention and that’s how I ended up reading my first Emily Goodwin book. Yes, I know it’s the third in the series, but I read it as a standalone. And now, after meeting the Dawson Family, I want to read all of them.

Scarlet has the worst of intentions when she meets Weston, but I like her anyway. She’s had a hard life and it’s made her hard. Well, at least she thinks so. “—when you have darkness inside of you, you have two choices: hate yourself for it or embrace it. I chose the later.” Myself, I don’t think she is dark or hard, I think she is a survivor and she had to make decisions that no teenager should have to. Once you cross the line and have to look in the mirror afterward it becomes easier to forget your dreams and accept what you can’t change. Love is a fairytale she no longer believes in. “Being in love meant having a heart, and I convinced myself mine stopped working long ago.”

Weston is a #SingleDad and a #HotCop. As you can imagine the women of his small town were falling all over themselves to get his attention. But they are wasting their time because he has been burned too bad to consider trying again. If it wasn’t for his job he would never have considered a nanny for his son. He put it off as long as he was able until his sister finally stepped in and took matters into her own hands. He had no idea what she looked like until she showed up, and then he couldn’t forget.

I really enjoyed this story. The dual POV had me seeing things from both sides and I found myself tempted to turn the pages with crossed fingers. I was yearning for an HEA but worried about what would happen when the good guy discovered she was a bad girl. And wait until you meet Jackson. That boy will have you saying yes before you even hear the question, he’s that cute. Did I mention that he has twin uncles? Imagine the fun stories we to look forward to. The line forms here…