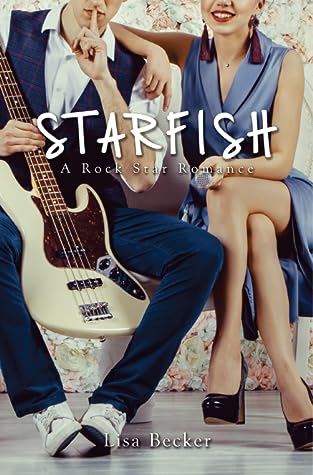 Ambitious graduate Marin Collins accepts a four-month internship at a prestigious public relations firm to work on a tech account, but her plans are derailed when she’s assigned to go on the road with touring rock band Kings Quarters, hailed by Rolling Stone as the next big thing.

Enter Brad Osterhauser, the reluctant rock star who would rather be coding computer games than penning Grammy-nominated songs.

Traveling by bus, city to city with a group of practical joking bandmates and a greedy manager, Marin and Brad forge a friendship and forbidden romance over a shared love of Seinfeld episodes, stolen moments and Red Vines.

But when Marin’s accused of betraying her company and the band, will Brad come to her defense or believe she was disloyal to him for the sake of her career?

Told in alternating perspectives of Marin and Brad, Starfish is a contemporary romance of unexpected love, the redemptive power of music and hogging the bed.

“It’s fine to ogle him from afar, but hands—and tongues—off.”

Starfish was my introduction to the work of author Lisa Becker. Of course, it’s my rockstar addiction that put this new-to-me author on my radar. I just can’t resist them and after reading the synopsis I was sold. Especially when I learned that Brad was not only a ‘reluctant rockstar’ but also a geek. Technology is another of my interests and I really enjoyed the nerdy witty banter.

The story is told in dual POV and I admit to quite a few giggle-snorts when both Brad and Marin lusted after each other wearing glasses. The fact they actually preferred each other in them was sweet. Yes, that’s right. Brad’s not your typical alpha asshole rocker who’s into the whole sex, drugs and rock n’ roll scene. Nope, he’s into Seinfeld and computer code. While his bandmates are drooling over blonde bombshells with silicone enhancements, he’s drooling over her brown bob, curvy ass and thighs.

The colorful support characters are addictive as well. Marin’s bestie is funny and adorable and the band members are non-stop pranks and jokes. I had fun hanging out with all of them as I virtually joined the tour. There were also a few dark characters that I wanted to run over with the tour bus, and then back up and do it again. I found the story to be sweet and entertaining as well as funny and suspenseful at times. And when you learn why it’s called Starfish you will be smiling with me.