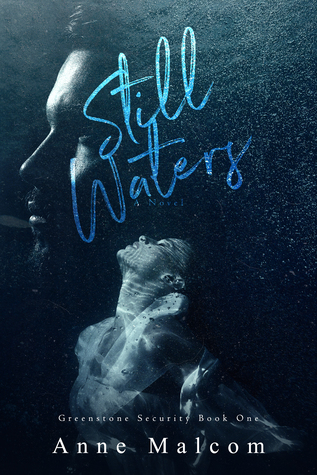 But there’s more to it than that.

Because “still” doesn’t denote peace. Nor calm. Nor happiness.

The only way to handle chaos is to become it.

That’s what Lucy did. She created stillness out of the chaos tumbling inside her and called the most chaotic motorcycle club in the United States her family.

The Sons of Templar gave her chaos, friendship, family, danger and death.

But she wouldn’t want it any other way.

Then he came. The one who showed her that her handle on chaos was tumultuous at best.

Showed her how to stand still.

And how good it could be.

And how drowning in those waters comes as easy as breathing.

“I could taste the storm that lingered beneath the still. Chaos recognized chaos, after all.”

I really enjoyed this first installment of the Greenstone Security series that features some well-loved characters from the author’s Sons of Templar series. You can’t go wrong with that combination, right?

Lucy is broken, but surviving. Surrounded by her friends and family that love her unconditionally she’s content, though not necessarily living her dream. She’s become conditioned to the chaos that is her life and not really looking for more. Then he walked in…more. “—hunger I thought myself immune to, now rivaled anything I’d felt when on one of the many crazy diets I’d done over the years. It was like I hadn’t had carbs in seventeen years and he was a big bowl of pasta.”

Their attraction was immediate and intense. Their bodies called to one another and their ghosts refused to stay hidden. “Yeah. I see you, baby. I see all of you. Mostly because it takes someone who’s been under that water to recognize what the drowning feels like.”

Lust and passion and pain pushed and pulled them as they struggled to make peace with their demons. It was easier to run than to risk being hurt again, but danger kept rearing its ugly head and he was determined to keep her safe.

I tried Google (it worked so well for Lucy), but I could not find a phone number or website for Greenstone Security. I was hoping to hire a sexy bodyguard to keep an eye on. Nope, that wasn’t a typo. 😉 I guess I’ll just have to grab a copy of Shield and see what kind of trouble Rosie gets into instead. The line forms here…