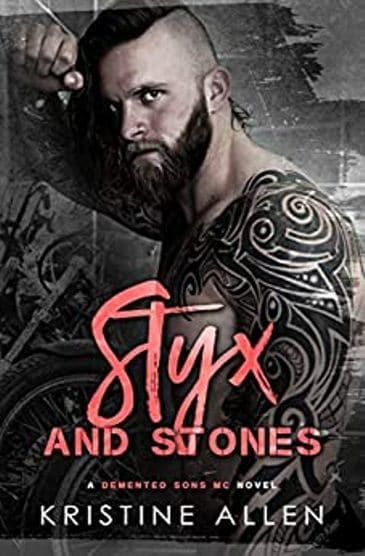 I’m the Enforcer for the Demented Sons MC, I don’t do beach hook-ups with a prim-ass school teacher. And I sure as hell don’t obsess over the chick afterward. But that’s exactly what I did.

Remembering every inch of her luscious body, every damn sound she’d uttered—I fell into a hole I couldn’t crawl out of. A five foot nothing, legs for days, hole.

No choice, I made a decision. Come hell or high water, the school teacher was gonna be mine…

Except I didn’t realize she had a past I couldn’t survive.

“Oh, I’m definitely Mr. Wright. I have the ID to prove it. But if all you need is Mr. Right Now, I can be whatever you need me to be.”

I was so thrilled when the author decided to write the Demented Sons MC Texas series for several reasons. One, I’m from Texas. Two, I’m late to the party and haven’t read the original series yet, so I was able to jump on this train and ride it now, planning to go back and read the others and catch up later.

Styx and the sexy school teacher hooked up unexpectedly. The straight-laced middle school teacher had been drinking and she literally fell, almost, right into his lap. She’s not his usual type, but then again he hadn’t been looking either. Once he’d had her, he didn’t want to let her go.

She’s mortified by her inebriated behavior, but not so much that she regrets it. It was the most passionate night of her life. Bossy badass bikers are not her usual type. She’ll probably never see him again, but she’ll never forget the best sex she’s ever had.

They never expected to see each other again. Though it was not a disappointment to either when their chance meeting happened. Her friends, family and co-workers might be thinking she’s a good-girl-gone-bad if she ever tells them about him. She’ll worry about that later. Right now, he’s got her melting for him. “My poor hooha was screaming for him. If I could, I would’ve told her to shut the hell up.” Isn’t she adorable? She rarely cusses and when she does, it really turns him on.

I can’t give you details, but I will share that there’s some secrets in her past that make a surprise visit to her present. Details that she sorta didn’t mention to the sexy biker and might’ve been a good idea to clue him in on…earlier. But, it wouldn’t have been nearly as suspenseful if she had. Gotta say, I totally dig trying to figure things out myself. And I really love it when I can’t and get a good surprise at the end.

Finally, I can’t close without mentioning the amazing covers for this series. Can I get an amen? They are gonna be a gorgeous addition to my bookshelf someday. I hope that it will be a big collection, because I need lots more. I’ve already fallen for the club members and can’t wait to find out who will be featured next. The line forms here…