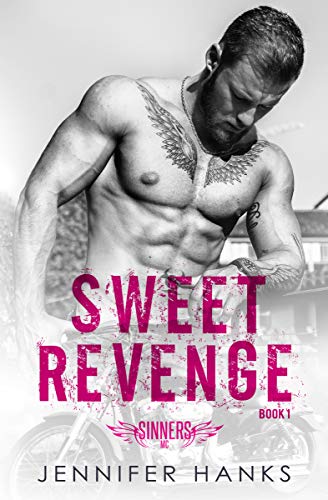 Three words the men of the Sinners MC live by.
Three virtues they have sworn to defend.
No matter what the cost.

Meet the intense and sexy men of the Sinners MC in Maggie and Gunner’s story where revenge isn’t the only sweet victory.

He shouldn’t want her.

Maggie O’Brien has the ability to destroy him and his plan for revenge on his club’s biggest threat.

But he’s craved her almost as long as his retaliation, and nothing will stop him from getting everything he’s always wanted.

Not even the man he fears she really loves.

She doesn’t trust him.

Ryker Evans, a.k.a. Gunner, has the ability to change that with his kind words and soft touches.

But she decided when she sacrificed herself to save another that she would never give someone the power to break her again and that kindness comes at a price.

A price she is no longer willing to pay.

In a world filled with lies and secrets where freedom is fleeting, can they learn to love each other enough to survive?

Or will the cost of revenge be too high?

This is the first book in the series. Can be read as a standalone.

“She was a balm to my battered soul.”

My addiction to MC Romance led me to a new dealer. This is my first time to read anything by this author and I’m very happy to report that it was a good decision that paid off. I really enjoyed Sweet Revenge and look forward to more Sinners MC.

Maggie has been in survival mode for years. Not living, just existing…barely. She’s learned not to trust anyone, even herself. Looking back she realizes that the hopeless situation she finds herself in is the result of a bad decision that she’s been paying for in pain. She’s broken and though she might not have been brave enough to save herself she can’t let someone else be hurt, right?

Gunner has watched her from afar. Knowing she was taken. But unable to look away from her beauty when he is lucky enough to get a glimpse. He never expected her to do what she did. He still can’t believe how brave she is. How much longer can he fight his feelings for her when she’s close enough to touch?

I was so proud of Maggie for pulling up her big-girl-panties and taking care of business in spite of her fear. She’s placed her own life in danger, but she’s never felt safer. She knows more than she should. She wants what she can’t have. She needs something she can’t even name.

Yeah, I have no problem naming it for her. G-U-N-N-E-R! That sweet sexy badass biker is exactly what she needs to scratch that itch she can’t identify. And guess what, he’s not so sweet to the bad guys. That softer side comes out for her…sigh.

I fell hard for the Sinners MC family and excited to spend more time with them. The line forms here…