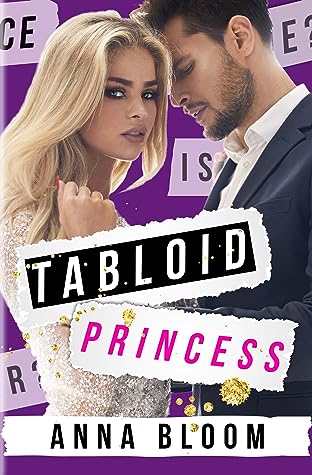 She didn’t believe in fairy tales… until she fell for a prince.

Single mother, Leia Lawrence didn’t have a storybook childhood.
Now? Dating… men…? She’d rather stay in her tower of solitude.

Until her path crosses with the heir to the British throne.

Oliver is nothing like the man she expects. Smart, funny and caring, he could push through every defence she has in place.
But one passing moment could change everything. It could bring the press to her door and unbury secrets she thinks are long dead.

What will he be willing to do to protect her?
She has nowhere left to turn, except to her prince.
The only thing she can do is wait and see if he’ll choose to protect his country… or her…

Tabloid Princess was my introduction to new-to-me author Anna Bloom. I admit that the synopsis was very intriguing and I just had to read more.

Leia had me giggling immediately with her sass and lack of filter. She is 100% real and doesn’t hold back. I kinda think that’s what attracted Oliver as well. He’s so used to brown-nosing, bowing and scraping that he never knows what’s real. She’s real…but off-limits.

The forbidden aspect of this story kept me anxious and worried about Oliver and Leia. I wanted them to have a chance to explore their attraction for each other. But, damn, what a crock of chaos they had to avoid to even get a few minutes together. You’d think the fear of discovery would make it not worth the risk. But that’s only because you haven’t felt their chemistry. Yeah, just getting them in the same room together had sparks flying between them that even I felt. I can understand how all the details would get lost in their brain fuzz at being together.

I really enjoyed this peek into their lives and the mind-boggling hurdles they’d have to jump in order to be together. Not sure if I’d survive it. Not sure if they will either. The only way to find out if they do is in Scandal Queen, releasing November 28th. 😉