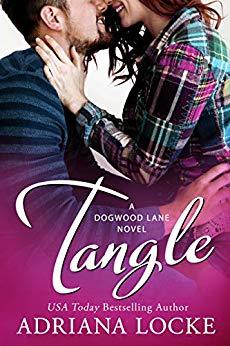 Sparks fly between a die-hard romantic and a sexy cynic in this fresh, funny romance from USA Today bestselling author Adriana Locke.

That cream-filled, caramel-topped doughnut should have been hers. Still, Haley Raynor can’t deny that the pastry thief with the dreamy blue eyes looks even more delicious. But moving in on a handsome devil like Trevor Kelly is bad news for a die-hard romantic like Haley. Trevor doesn’t believe in love. She does. Giving in to a fling and Trevor’s irresistible charms can’t end well. Can it? What can it hurt to give it a shot?

Girls always fall for Trevor, and in the end, he always ends up looking like a bad-boy cad. Still, spending some time with Haley and her smart-talking, kissable mouth sounds pretty perfect. Besides, he’s only going to be in Dogwood Lane for one week. How much trouble could they possibly get into?

The only answer? A “no falling in love” contract. All Trevor and Haley have to do is follow the rules and resist the attraction sizzling between them…before their hearts get completely tangled up in temptation.

“I want her to want me the same way I’m wanting her, even though I know it’s fucking stupid. And unfair. And illogical. But she doesn’t. And I shouldn’t.”

I have to say, I have a girl crush on Hayley. She had me cracking up in the first chapter and I never stopped. Especially when she’s with her bestie Claire. Please tell me she’ll get her own book, pretty please? I can’t wait to meet the man that can handle her…and Hayley since they are a package deal. I’m smiling just thinking about it.

Hayley is a ray of sunshine and it takes a lot to get her down. Well, at least that’s the case if you don’t wake her up early. She’s not a morning person, but she’s full of love and laughter the rest of the time. Unless her heart’s broken. That’s happened quite a lot actually. She’s a romantic and believes in love, if only she could find a man that did as well.

As she’s bent over the counter begging for the cream-filled, caramel-topped doughnut, ass in the air, her bestie “didn’t bother to blurt out a ‘hot guy’ or ‘sexy stranger’ warning. Nope, said sexy stranger gets a birds-eye view of said ass. She might have been too flustered in embarrassment if it didn’t become quickly obvious that he was going for her doughnut. After the morning she’d had she wasn’t giving up without a fight and proceeded to turn her charms on the gorgeous stranger. Calling him a thief might not be the best plan for most, but he couldn’t resist her sass or her ass… which looked sweeter than the doughnut.

The only problem with that memorable first meeting was that he didn’t do relationships and she didn’t do one-night-stands. They were attracted to each other, but there was no future for them, especially with him only being in town for a week. It might have been easier for them to resist the temptation if they didn’t keep running into each other. “My resolve weakens as he uses that damn dimple as a weapon. Finding the part of my brain responsible for logic under all the sexual frustration is nearly impossible.”

They weren’t the only ones frustrated. I wanted to light a match next to them because I’m sure that’s all it would take to turn the spark into an explosion. But, at the same time, the witty banter and negotiations between them were pretty damn entertaining. Just wait until you read the terms of their ‘no falling in love’ contract, you’re gonna be joining me in my giggle-fest.

There are so many colorful characters in Dogwood Lane that this amazing series could go on and on, and I hope it does. I got a glimpse of where I think it’s headed next and I’m so excited to find out if I’m right. The line forms here…

Memories of You by J. Kenner
My Cruel Salvation by J. Kenner
Embrace Me by J. Kenner
Dream Chaser by Kristen Ashley
Bayou Baby (Butterfly Bayou, #2) by Lexi Blake
More Than Dare You (More Than Words, #6) by Shayla Black
A Secret for a Secret (All In, #3) by Helena Hunting
Driving Him Wild (The Mortimers: Wealthy & Wicked, #4) by Zara Cox
Dream Maker (Dream Team, #1) by Kristen Ashley
My Favorite Souvenir by Penelope Ward and Vi Keeland
Finding Mitch by Lynn Jaxon
Tease Me (Stark International Trilogy, #5) by J. Kenner