Tangled Up In Christmas (Texas Heat, #2) by Lisa Renee Jones

Title: Tangled Up In Christmas 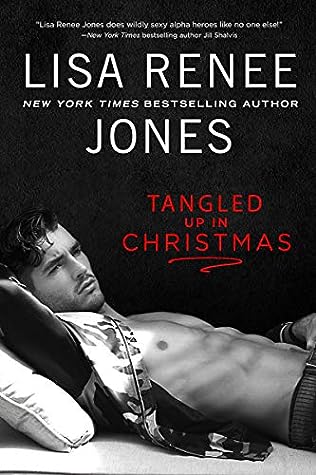 I might be a country girl from the same small town of Sweetwater, Texas, as horse wrangler Roarke Frost, the girl next door who knows him like few know him, but I didn’t know enough to save my heart.

He’s the reason why I left Sweetwater behind.

But now fate proves she loves a wicked twist and sends me back to Sweetwater to pull together a Christmas festival—and I run smack into the man again, quite literally. His body is pressed to mine, his hands on my arms, and I’m melting like chocolate in the sizzling Texas sunshine. And I run.

I know it’s not exactly respectable, but it works, just not for long. No matter how much I try to get tangled up in Christmas, I end up tangled up in Roarke instead—and the man has me feeling the heat of our attraction and the warmth of our past friendship. He feels like Mr. Right, but history says he’s Mr. Wrong.

But if he wants a second chance, Roarke Frost is going to have to work for it. He’ll need to prove to me that this holiday is a season of new beginnings, the kind that last forever.

“I lost him before I lost him, or what went down would not have gone down.”

I’m so addicted to this new Texas Heat series. I’d say it’s up there at the very top of my favorites from this author. Yes, I’m from Texas, but that’s not why. There are lots of reasons, including the amazing cast of characters in Sweetwater, Texas. And they aren’t just cowboys either. Nope, we got pro baseball players, horse wranglers, yoga enthusiasts, and cookie-baking grandmas.

I am enjoying the hell out of the mishaps and misadventures these fun ladies fall into. The witty banter and drunk adventures are noteworthy as well. And don’t get me started on the sexy cowboys who know how to handle a horse and a woman. “He’s not a man who demands unless we’re naked, and that’s a different ball game. That’s the balance that is this man. He’s an alpha. He’s in control, and yet, he makes me feel like I’m in control. He makes the animals he works with feel they’re in control when it’s him with the control.”

But it’s not all fun. There are secrets and sorrow hidden behind their smiles. It’s obvious to everyone that they still have feelings for each other. It drove me crazy trying to figure out what went wrong and how it could be fixed. I wanted Grandma to bake up some magic cookies that would make everything okay. But, “Sometimes love isn’t enough.”

Trust me, you will be planning a visit to Sweetwater to attend the Christmas Festival once you get a gander at the eye-candy. I’m already saving up in case there’s a bachelor auction. It’s for a good cause, right? The line forms here…