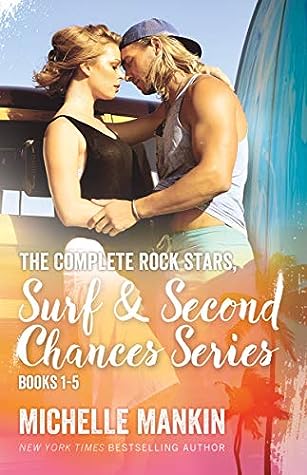 From New York Times bestselling author Michelle Mankin, The Complete Rock Stars, Surf and Second Chances Series is available for the first time ever in a box set. Five full-length novels. Your all access backstage pass to Southern California’s most famous rock band.

OUTSIDE
When handsome California surf god Lincoln Savage suddenly rolls into Ocean Beach like a rogue wave, shy beauty Simone Bianchi’s foundation is shaken. No longer under the thumb of her domineering father, she’s made a simple quiet life for herself and her fluffy Havanese pup running a surf shop in her hometown. Long ago she gave up her dreams for a future with Linc.

But now the notorious lead singer of the Dirt Dogs has returned, and Simone is reluctant to admit that she’s still vulnerable to his killer dimpled smile and easy charm. She finds that although she’s stowed away the mementos, it hasn’t been as easy to erase the memories of their epic summer love.

It seems he hasn’t forgotten, either.
Is the recording contract he’s offering merely a pretense?
Or does he have something more in mind?

RIPTIDE
Rock star Ramon Martinez can have any woman he wants, and he frequently does because he can’t have her. His bandmate’s wife. The one woman he could give his heart to, but he can never let her know.
Karen Grayson wanted Ramon way back at the beginning, but she thought he didn’t want her. So she made the safe choice. The wrong one.

Ramon and Karen were once friends.
Now they’re not even that.And they’re both back in Ocean Beach and that dangerous attraction remains.

OCEANSIDE
Oscar night.
Rock star legend, Ashland Keys should be on top of the world, but the blond blue-eyed SoCal surfer is disillusioned with fame, done with drugs, bored with the groupies and sick of all the fake f*ckery.
A rising star, Fanny Bay is nominated for best original song in the same category as the Dirt Dogs band, but the novel redhead with the corkscrew curls and the slight Canadian accent would prefer to chart a course with a different destination.

Hollywood is not for her.
He’s full of regrets, darkness and secrets.
She’s full of hope and light and has mysteries of her own.
Together, they don’t make sense.

But he’s what she’s always wanted, and she just might be everything he needs.

HIGH TIDE & ISLAND SIDE
Hollie Lesowski is a beautiful young actress locked in a legal battle with one of the most powerful and feared directors in Hollywood, a man who betrayed and hurt her, a man she mistakenly believed was her father.
Maximillian Cash is her bodyguard, a blond, blue-eyed giant sworn to protect her. Gentle despite his imposing presence, he seems to be just right for her. But can she trust him with her deepest secrets?

Diesel Le is a rock star in her sister’s band. Devastatingly sexy and annoyingly arrogant, the former pro surfer from Hawaii delights in driving her and everyone else crazy. So, why does she have to continually remind herself to stay away from him?

Two uniquely handsome men tempt her. Both want to make her their own. But one is her employee, and the other is a confirmed player.
Will she be swept away by temptation?
High Tide and Island Side is a heart-twisting, gut-churning, page-turning, coming-of-age duet. It is a triangular second-chance love story with two compelling alpha males but no cheating. Romantic and suspenseful, it sparkles with the glitz of Hollywood, sizzles with the tropical heat of Hawaii, and steals your breath at times, but it will also make your spirit soar.

He rearranged her world…then came back 15 yrs later to do it again.

Outside is a beautifully sweet love story. Their love survived in spite of the turbulence. Too bad it lived in each of their hearts separated by miles and years and tears and fears.

The story starts in the present, at the end. I felt the pain first. I felt the loss. I felt the devastation and the betrayal. I felt the passion that survived the pain and it continued to live in spite of it. But the question was, would she be strong enough to give it another chance. Could she survive it a second time?

Oceanside took me on a very emotional journey. I connected with Fanny immediately and when her life exploded and the undertow took her down I was right there with her, mentally pushing her toward the surface. Of course, I was hoping that Ash would be right there to rescue her. Not that he’d proven himself to me or anything, he’d done more of the opposite to tell you the truth. But I’m eternally optimistic, at least in the romance novel department. He is the least likely hero, broken to bits and barely holding on himself. Sex, drugs and rock n’ roll had taken its toll on his life and he has a jaded outlook.

High Tide made me consider and feel things I wasn’t expecting. I started with deep feelings of rage toward the a-hole stepfather and it only got worse as the story progressed. I became suspicious of everyone, especially when the paparazzi were involved and every detail found a way to the media. When said a-hole has so much money and power, can anyone be trusted?

The deeper I get into this story the more I find myself in danger of needing a tinfoil hat to keep my secrets safe. Just kidding, but really, the suspense is addictive in the best of ways.

I really enjoyed my visit to the ‘island side’. It was very educational and beautiful in my mind as I experienced things right along with the characters. I kid you not, I’m seriously craving some fresh fruit! 🍍 🥥🍌 I might not be brave enough to ever attempt surfing myself, but I had a blast riding the waves with the characters. 🏄

One of the things, of many, that I especially love about this series are the support characters. Regardless of which one the story focuses on, the others are present at some point and there’s never a shortage of love, support or witty banter. Another aspect of this story that really got my engine revving was the suspense factor. There are mysteries to unravel and a few jerks that I’d like to teach a lesson in a way that I could only get away with in fiction. I’ll let you figure that one out. 😉

As I’m sure you’ve figured out, I can only share what I enjoyed and how it made me feel, so as not to spoil the experience for you. I floved it, start to finish. There is so much to love. Did I mention the rock stars? Yeah, I’m addicted to them and the Dirt Dogs do not disappoint. I also have to give the author a shout out for some amazing lyrics (though she gives a sexy rocker the credit). I would love to visit OB to hang out with them, watch them surf and listen to their music…sigh. 🎵