Rock Me, a sexy new standalone from Carly Phillips 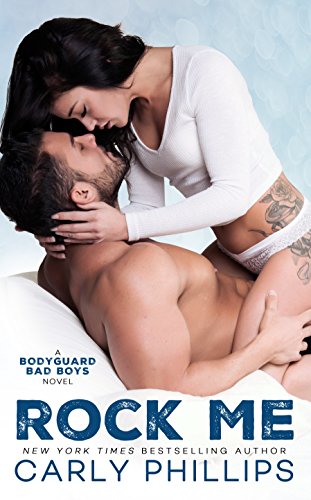 A pop star in danger.

A past they can’t deny.

Summer Michelle is on the verge of ultimate fame.

Ben Hollander has sworn off mixing business with pleasure.

But keeping his hands off of the sexy songstress is easier said than done and once the threat is neutralized, will she choose fame over love?

Her heart was pounding hard in her chest, the thunderous live applause still echoing around her and the rush of success and pride in overcoming what could have been a disaster, had her soaring.

“Did you see that?” she asked Ben. “My earpiece went dead and I nailed it anyway!”

“You totally did,” he said, a huge grin on his face that let her know he understood what a huge moment this was.

She squealed in excitement and threw her arms around his neck, needing to share her exhilaration. Their gazes met and locked, the air around them suddenly crackling with tension and sexual need even Ben couldn’t deny.

She knew what she wanted, knew there was no better time to go about it. Her gaze fell to his mouth and she pressed her lips against his. He jerked in surprise then groaned, thrust his hand beneath her hair, holding her against him as he slid his tongue past the seam of her lips and kissed her back.

He might think he wanted to keep his distance but his body was demanding they get close, his mouth gliding back and forth over hers, razor stubble bristling her cheeks in a sweet burn and his tongue delved deep. Against her stomach, she felt the hard press of his erection, causing desire to sweep over her in waves.

No wonder she hadn’t found a guy she wanted to keep in her life. No one could live up to Ben.

Rock Me is the first book in a new series by Carly Philips. Sexy and sweet with some drama thrown in. Definitely a read that will have you hooked by the end of the first chapter.

I can tell I'm going to love this series, badass bodyguards? Yes please!

Four years ago Ben and Summer had something while he worked security on a talent show she was a part of, Ben got fired and he and Summer lost touch. And now Summer has made it big and needs protection and Ben is the man for the job.

It doesn't take long for these two to rekindle their romance, but having been burned before Ben holds back some, he doesn't want to get hurt again.

All Summer has ever wanted was to be successful, and she's always reached for the Stars, now they they're within her reach. It's lonely at the top and now it seems she might get that second chance with Ben.

Loved this book and I'm so looking forward to more from the Alpha Security Team!

If your looking for a fast paced second chance romance then Rock Me is definitely one click worthy!