Roommates with Benefits by Nicole Williams 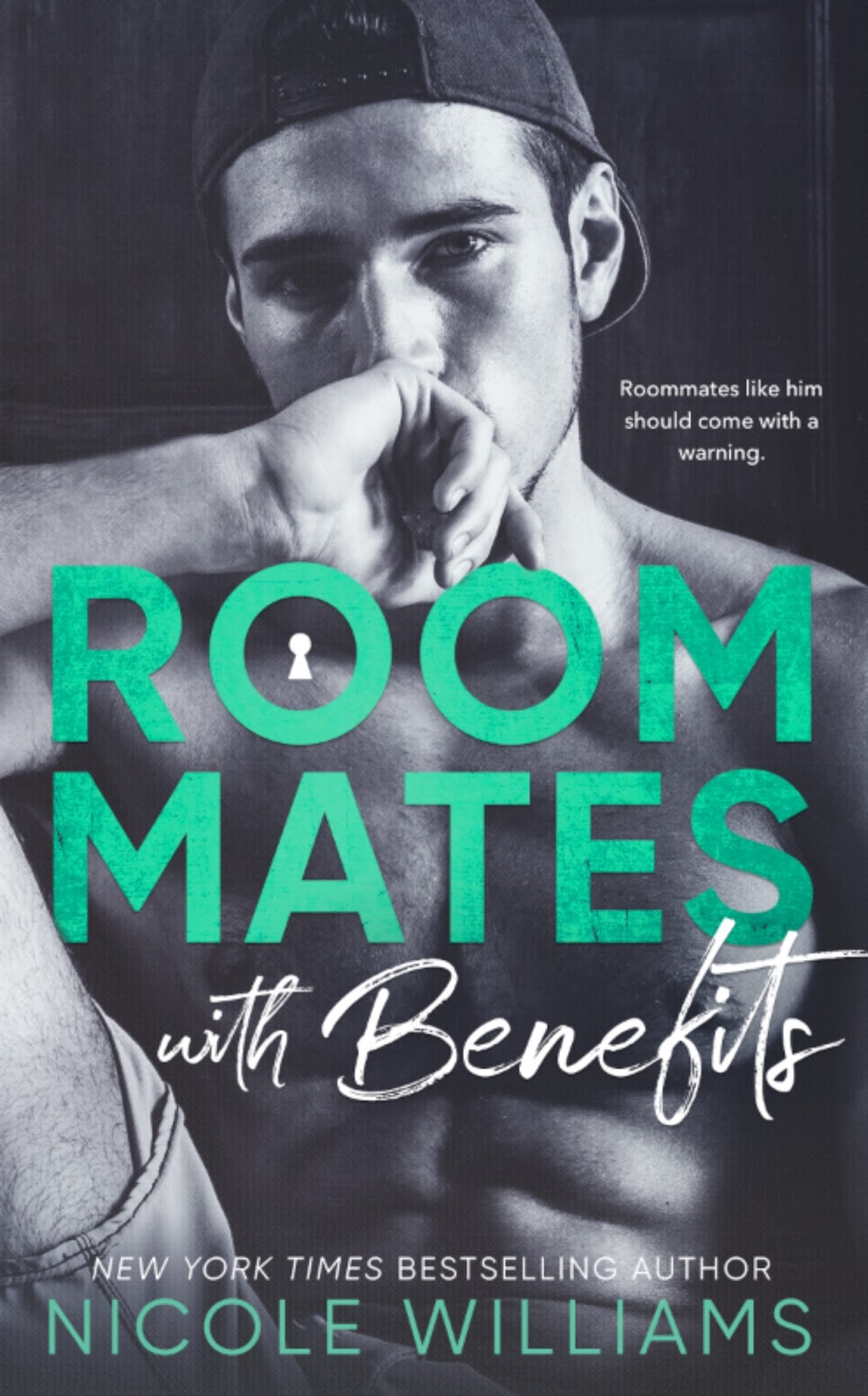 Soren Decker. He’s the epitome of the “bad boy, good man” persona. The best of both worlds. The worst of them too. He’s the type of guy most girls would not mind sharing a confined space with, except my new roommate isn’t all swagger and chiseled abs.

He’s bossy. Messy. Cocky. Infuriating. Doesn’t believe in personal space. Has no qualms about roaming the apartment with a loincloth-sized towel cinched around his waist. Seems under the delusion he’s my personal protector (refer back to infuriating). He plays college baseball and holds down a part-time job—I don’t know where he finds the time to get on my nerves.

We’re got nothing in common . . . except for one thing. Our attraction to one another. And in six hundred square feet of shared space, the tension only has so much room to grow before one of us gives in to temptation. But really, what chance do a couple of young kids chasing their dreams in the big city have of making it?

Since Soren claims I know squat about sports (he might have a semi-point), here’s a stat for him—one in a million. That’s our odds. 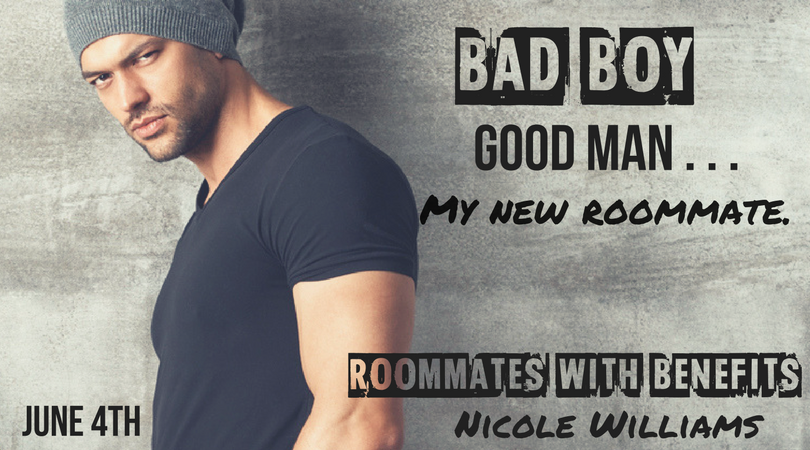 “Coming in,” I announced, opening the door and stepping inside. A plume of steam rolled over me, instantly coating my skin in a hot, dewy shield. “Hot shower?”
​“Hell of a lot better than the cold one I took a couple of nights ago.”
His voice echoed off the walls as I focused on squeezing a glob of toothpaste onto my brush. It was difficult. I found myself quite distracted by the knowledge he was naked behind that thin shower curtain, a whole three feet away.
​Just as I was about to stick my toothbrush into my mouth, the shower cranked off, the curtain whipping open right after.
​Soren. Wet. Exposed.
​Giant.
​My eyes clamped shut, but it wasn’t fast enough. From the low chuckle he gave, he hadn’t missed my two-second gape.
​“Soren!”
​“Sorry. Water got cold.”
​I gave him a few seconds to cover up before I opened my eyes and got back to brushing my teeth. He hadn’t covered up though.
​“What are you doing? Grab a towel.” My arm flailed in the direction of where we kept our fresh towels hanging from the rack. My eyes felt like they were about to go crossed from staying focused on my reflection instead of his naked one in the same mirror.
“Out of fresh towels. Haven’t gotten around to the laundry.” He moved up beside me at the sink, reaching for his own toothbrush. He was standing so close, his wet arm was brushing against mine.
Don’t look down. Don’t look down. Don’t look at the giant—
Crap. I looked.
He was grinning at me as he brushed his teeth, my face crimson thanks to what I’d glanced at.
“See anything you like?”
My body was still buzzing from what I’d seen that I liked. I kind of hated him for calling me out on it though. I kind of even hated him for having so much to like.
“I know what you’re doing.” My eyebrow rounded as I got to work brushing my teeth too.
He spit in the sink, somehow winding up closer to me when he leaned back up. “Air drying?”
My eyes narrowed in the mirror at him. “Trying to change my mind.”
He stared back, brushing his teeth in all of his naked glory, a cocky tenor to his expression. Once he finished brushing, he rinsed his toothbrush and turned toward the door.
“I don’t need to change your mind,” he said, pausing when he was directly behind me.
When he turned, I swore I could feel his arms coming around me, pulling me into the shelter of his strong body. An involuntary shudder spilled down my back. He didn’t miss that either.
“I just need you to speak it instead of lying about it.” His eyes dropped to the back of my neck, where I knew he could see the raised flesh. I knew, because one side of his mouth lifted.
Bracing my hands on the sink, I didn’t blink as I locked eyes with him in the mirror. “It takes a lot more than washboard abs and a giant . . .”
Crap. Something else. “Ego to get my attention.”
Soren leaned forward, his hands framing around the outsides of mine, his arms running the length of mine. His chest didn’t touch my back, but I could feel its expanse hovering above it. “I’ve already gotten your attention.” His eyes dropped from mine to my chest. Where it was rising and falling noticeably hard, my nipples pushing through my camisole. “I’m looking for something else.”
Another shudder, this one spilling down my legs. “What?”
His crooked smile changed into a cryptic one before he leaned back and opened the door. “You’ll see.”
“Soren—”
“Don’t worry. I’ll tell you when you give it to me.”
My fist curled around my toothbrush as I turned toward him. “I’m not giving you anything.”
“You’re giving me something right now.” He didn’t glance back before leaving the bathroom. Did he really need to have that nice of an ass when he already had a glorious package? I was screwed. “This point goes to Decker.”

I have read a few Nicole Williams books in the past and really enjoyed them, so when the opportunity to read and review Roommates With Benefits for the blog tour showed up, I grabbed it up as quick as I could. The blurb had me all excited to read this one and then add in the hot as hell book cover and I was sunk. Like I mentioned earlier it had been a while since I had read a book by this author and this book was just what I needed to get me out of the reading funk I have been in over the last several weeks. Williams writing style is awesome, she knows just how to draw the reader in and I connected with the characters from the very beginning. She writes an awesome, sexy, funny, story that had me reading it all in one sitting.

Hayden Hayes has just landed in New York, ready to start her modeling career and new life. Growing up in Nebraska was and is so different from the streets of NYC. Finding out that her new apartment and roommate are no where near what she expected has her almost heading for the hills. For starters, how they call this place an apartment is beyond her, it is the size of a bedroom and two people are supposed to live in it. And Soren Decker, her new roommate has her questioning what the hell she has gotten herself into. The sexy, baseball playing bad boy makes her weak in the knees and she has to live with him!

Soren drives Hayden crazy! He has no problem with walking around in next to nothing. He is always in Hayden's personal space. He works hard for what he wants and what he has in life. When he isn't on the ball field or working he is trying to keep Hayden safe, something that drives her mad. She has moved to the city to pursue her dream and she wants to learn and grow on her own, not with some lug of a baseball player watching her every move.

I loved the crazy banter between these two and the chemistry was hot, hot, hot! The sexual tension that radiated off the both of them could be cut with a knife. What starts out as roomies, becomes something more, but can they learn to get past their trust issues and find a way to make a relationship work or are they doomed from the very start?

Seriously, go grab your copy of Roommates With Benefits and get sucked into this sweet, sexy, romantic, funny story and loose yourself in Soren.

5 Out of The Park Stars 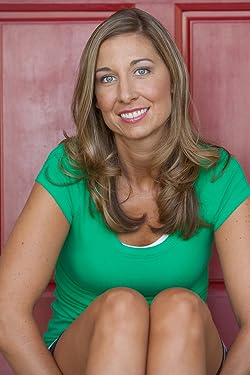 Nicole Williams is the New York Times and USATODAY bestselling author of contemporary and young adult romance, including the Crash and Lost & Found series. Her books have been published by HarperTeen and Simon & Schuster in both domestic and foreign markets, while she continues to self-publish additional titles. She is working on a new YA series with Crown Books (a division of Random House) as well.
She loves romance, from the sweet to the steamy, and writes stories about characters in search of their happily even after. She grew up surrounded by books and plans on writing until the day she dies, even if it’s just for her own personal enjoyment. She still buys paperbacks because she’s all nostalgic like that, but her kindle never goes neglected for too long.
When not writing, she spends her time with her husband and daughter, and whatever time’s left over she’s forced to fit too many hobbies into too little time.
Nicole is represented by Jane Dystel, of Dystel and Goderich Literary Agency.