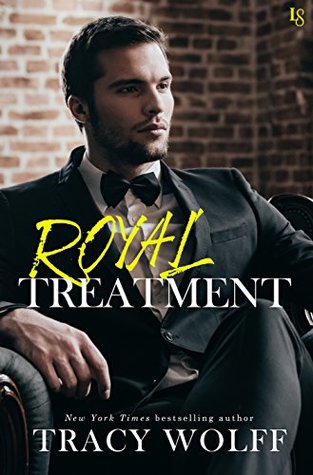 What’s a crown prince to do with time on his hands? Or better yet, who? It’s Prince Garrett’s turn to find love in this mouthwatering standalone novel from the New York Timesbestselling author of Royal Pain.

Once upon a time I was being groomed to sit on the throne of Wildemar. Now I’m lucky they let me into the palace through the front door. After I was kidnapped and tortured by extremists, my reward upon my release is that nobody trusts me enough to let me be king. And since my twin brother, Kian, has assumed all my responsibilities, I figure why not take over as the black sheep?

But after breaking things off with my betrothed—we never had much chemistry, anyway—and giving the jetsetting playboy lifestyle a try, I’m starting to wonder if I’m cut out for this s***. Then I meet Lola Barnes, a drop-dead gorgeous entrepreneur from the States who’s as refreshing as she is feisty.

It’s supposed to be a one-night-stand—until the press catches wind of my “new American sweetheart.” Trouble is, Lola’s no sweetheart. But the more I see our names together in the headlines, the more I find myself craving another taste. . . . 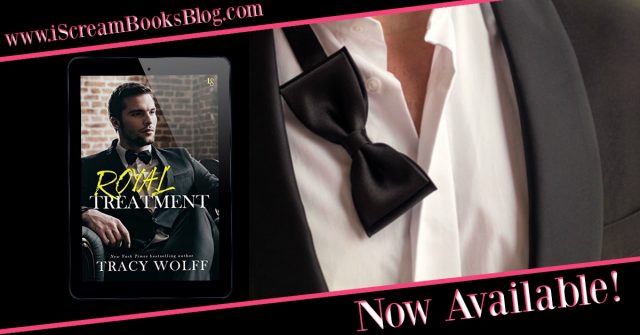 “My flight leaves in a little over three hours, Garrett, and I am going to be on it.”

“Don’t you understand? No one will believe a woman in the first stages of a relationship goes running off to another city.”

“Maybe not in your rarified world where half of everyone’s job is learning how to manipulate the press and the public. But in the real world where I live, nearly everyone will believe it. People have relationships and manage to go to work all over the world.”

I think of the months of being chained up, of sleeping sitting up with my arms above my head while my body screamed from pain and exhaustion. “My world’s not that rarified.”

“Dude, your world is as rarified as it gets. And you’ve got three security guards sitting outside to make sure it stays that way.” Lola swings her suitcase off the bed with a roll of her eyes. “And I get it. I understand that you were raised to believe the sun rises and sets on you, and that every time you so much as breathe it’s national news. But really. You aren’t that special.”

Things are getting tense between us and I know I’ve got two choices. Continue down the road to a full-blown fight that will get me nothing or try to defuse the situation.

I settle for the latter as I raise my brows at her. “That’s not what you were saying an hour ago.”

Surprise flickers in her eyes, then is gone as quickly as it came.

“An hour ago I was under duress,” she answers with a sniff.

I waggle my brows at her. “And here I thought you were under me.”

She snort-laughs, then slaps a hand over her mouth like she wants to pull the sound back in. But it’s so unexpected that I kind of love it. The same way I love that she talks in her sleep and has a star-shaped cluster of freckles on her left hip. The same way—

And fuck. Just fuck. I really am falling for this woman and, apparently, there’s not a damn thing I can do to keep her from walking away in three hours. It shouldn’t matter, but it does.

What the hell am I supposed to do now? 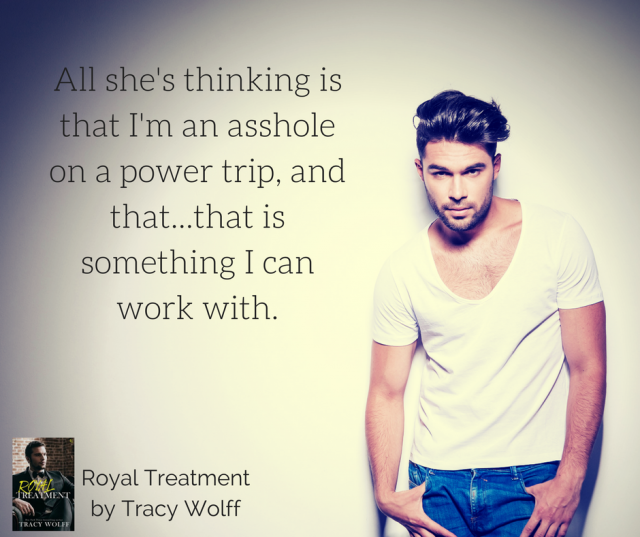 "Two people as messed up as we are really have no business being together."

I confess, I didn't think Garrett could win me over as much as his twin brother Kian did, but I was wrong. When Garrett was rescued after being kidnapped and tortured, the broken prince stole my heart. I learned that he was more than the goody-goody chosen one, and an heir to the throne. Yeah, maybe he was more serious and not as funny and carefree as his twin, but he had so much more responsibility to weigh him down. Well, at least he did, before his father decided that the son that was returned to him after the abduction wasn't fit to be king. Now the heir has become the spare.

Kian is still hilarious, especially now that he's taken over Garrett's role as the next prince in line for the throne. It's the last thing he wants. He's never wanted that responsibility and he's fully aware that his brother does. If it wasn't for Garrett's coaching, he wouldn't have even made it through a single one of the meetings he's required to attend. Let's hope that there's still a country left to lead by the time he gets through messing up.

Garrett tries to keep his resentment under control and his anger simmering below the surface. But sometimes it's hard to accept his new lot in life. He's made the ultimate sacrifice and rather than it being appreciated he's been put out to pasture. Why not see if the grass really is greener on the other side? Kian had a blast being the black sheep of the family, so why not give it a try? Maybe women and partying and no responsibility is the way to go. That's how he met her...Lola.

Lola is an amazing character who won me over in a single sentence. I became the president of her fan club immediately and never wavered in my support. She is a little red-headed fireball who is not intimidated by royalty or their security and is not afraid to let them know it in no uncertain terms. How could Garrett fail to notice and appreciate her? Especially when she was wearing a tiny bikini when she decided to take on his security detail. He thought he would be satisfied with just a taste, but once he got one, he knew it wasn't enough.

Garrett might know how to run a country, but he couldn't run her. Even when he gave her the 'royal treatment' he was the one bending to her will. He couldn't get enough of her feistiness and her beauty bowled him over. When their one date got caught on camera the media exposure made it impossible to keep it a secret. Was their invasion of her privacy too much to handle, or would she be willing to keep playing with the prince?

I've really enjoyed the His Royal Hotness series and wish there were more princes in the palace to look forward to. But no worries, I'm ready for whatever the author has for us next, she never disappoints. The line forms here... 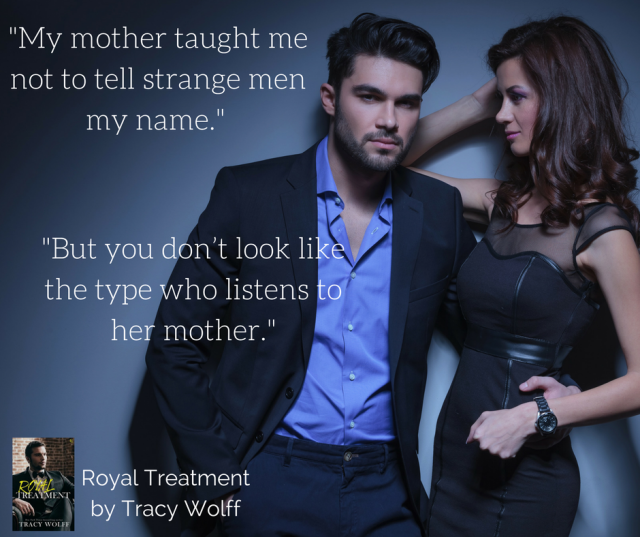 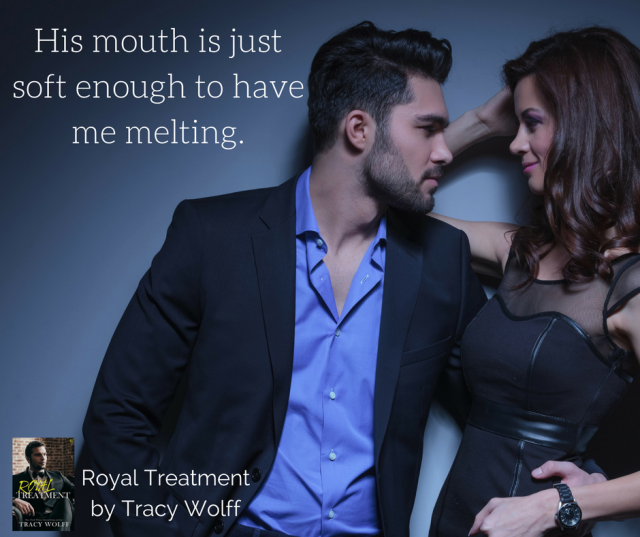 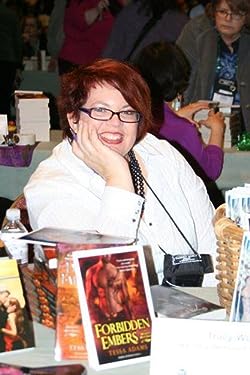 Tracy Wolff collects books, English degrees and lipsticks and has been known to forget where—and sometimes who—she is when immersed in a great novel. At six she wrote her first short story—something with a rainbow and a prince—and at seven she forayed into the wonderful world of girls lit with her first Judy Blume novel. By ten she’d read everything in the young adult and classics sections of her local bookstore, so in desperation her mom started her on romance novels. And from the first page of the first book, Tracy knew she’d found her life-long love. Now an English professor at her local community college, she writes romances that run the gamut from contemporary to paranormal to erotic suspense.

And for all of those who want the unedited version:
Tracy Wolff lives with four men, teaches writing to local college students and spends as much time as she can manage immersed in worlds of her own creation. Married to the alpha hero of her dreams for twelve years, she is the mother of three young sons who spend most of their time trying to make her as crazy as possible. 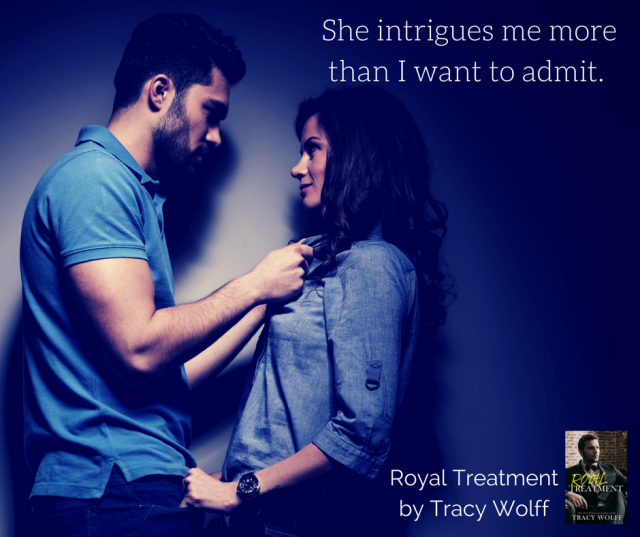