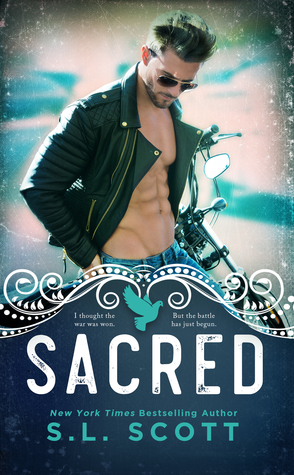 The battle was SAVAGE. The king got his queen, but where is my SAVIOR?

When I thought there was no hope, that suffering this lonely life was my destiny, I saw her. The bubblegum pink skirt caught my attention, but her doe eyes captured my heart. That’s the way the world works, right? Beat you down and then give you a glimmer of something else, something that might be real.

With her, I don’t have to hide the demons that haunt me, or to relive my darkest days alone.

With me, she’s free to be whoever she wants to be. She’s amazing.

Together, we’re two people clinging to a ray of sunshine that only the other can see.

I let my guard down. I got too comfortable. I thought the war had been won when, in reality, it had just begun. When old debts accrue, past demons return to collect their dues.

To find the SOLACE these young lovers crave, will they have to sacrifice the one thing they hold most SACRED?

Curvy ass under a fitted skirt. Tight as fucking—good God almighty. Like a flame, I’m drawn to her. I stand, not even sure why, but I’m moving before I can stop myself following a bubblegum pink skirt that just so happens to be attached to a killer little body and a head of brown hair that flows to the middle of her back.

Damn. I stumble. She reaches as if she’s going to catch me before I fall. I’m falling all right, but not to the ground. I stop, standing tall and straightening my shoulders. Real smooth. I actually fucking stumble when she looks back and our eyes meet.

A halo of yellow sunshine surrounds her, an angel sent from the heavens to save me. The beauty asks, “Are you all right?”

A smile that rivals the heavens appears. “Yes, you.”

That pretty smile grows, and a sweet giggle follows. “I’m glad.” The longer we hold eye contact, the more her composure falters, an unease entering her pretty hazels. “Okay, I should go then.”

“Stay?” she asks in the same confused tone as the last question.

Her hand slips into mine and I’m tempted to not just shake it, but never let it go. “Nice to meet you, Cruise. If you’ll excuse me—”

That’s when I notice the books held to her chest with her other hand. “Are you a student?”

“No.” Her reply comes fast with a look of horror filling wide eyes. “I’m not. Are you?”

The relief between us is palpable as our sighs fill the space. Her eyes glance down to our adjoined hands, my hold on her still just as firm. “May I have my hand back, Cruise?”

“Yes,” I reply, then reluctantly release her.

“I’m late for an appointment.”

I don’t want her to go. I like looking at her. I like talking to her and I really like holding her hand. She has fine features, but I can’t stop staring at her cherry-kissed lips. She turns to walk away too soon, so I call out, “Hey, I never got your name.”

“Maybe I’ll see you around.”

She’s not showy when she saunters off, but I watch rapt by every sweet sway of her hips. I find myself tugging at the collar of my shirt, that all-wrong-itchy feeling returning.

I run after her.

Sidling up beside her, I keep her pace, and ask, “Why won’t you tell me your name?”

“Because you don’t need to know it.”

She stops, and looks at me. “Just because you want it, doesn’t mean I owe it to you.”

Feisty. Getting a woman’s name isn’t usually a problem for me, but I respect her argument too much to counter with one of my own. “You’re right. Absolutely right.” This time I notice how the white sweater hugs the front of her body. Damn. I invade her personal space, captivated by her defiance. “I’ve been rude. My apologies.”

“I don’t need an apology, but I do need to go. I’m running late.” She takes a few steps away from me, but says, “Have a good life.”

My hands rise in the air, exasperated with this outcome. “You’re really not going to tell me?”

Her laughter splinters the air. “Unfortunately no. I can tell you’re the kind of trouble I should definitely walk away from. Name intact.” Quick stepping with determination, I watch as she crosses the parking lot.

"I'm just wondering if you're my reward for surviving."

I met Cruise in the author's Kingwood duet. He's Alex's (aka King's) best friend. I was excited when I learned that he would get his own story. Sacred exceeded all my expectations. I'm a huge fan of stories with broken characters, and this one has two. It ripped my heart out, and then put it back together with every smile, kiss, and promise shared between these amazing characters.

Cruise has been through hell, and he returns every night in his dreams. He survived his ordeal, but he's not really living. He's just getting by. Now that his best friend has finally settled down with the love of his life he sees what it's supposed to look like. It's not something he witnessed in his own family. But seeing the real thing makes him wonder if there's someone out there meant for him. There are lots of women that try to convince him that they can make all his dreams come true. But he knows they just want his name and his money.

It's not until he meets her that he believes that there might be something more for him. She does not even know who he is. She doesn't care if he has money. She doesn't even know his last name. She just likes him. He knows he's not good enough for her. He knows that if she knew all of his secrets she wouldn't want him. But he can't resist her. She's his yellow.

I'm not gonna tell you who she is since the author doesn't mention her name in the synopsis. I'll just let you meet her like I did. You will fall in love with her, just like he did. She's perfect for him. She's as broken as he is so she understands him without him saying a word. "His rough to my soft. I wonder if that's how we'll always be. If two shattered souls are better apart or together."

This story is so dark and deep and heartbreaking. It is so sad and sweet and beautiful. I loved it so hard. I don't know where the author finds her inspiration, but I will keep returning to the well to fill my kindle with whatever she comes up with next. The line forms here...