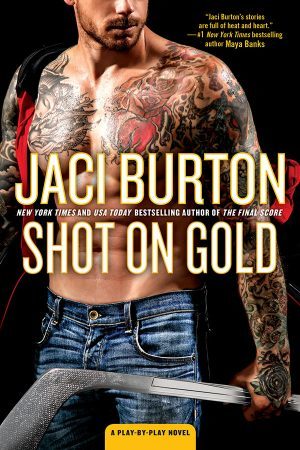 In the new Play-by-Play novel by the New York Times bestselling author of The Final Score, opposites attract when a figure skater and hockey player lace up their skates--and go for the gold...

Will "Mad Dog" Madigan is making his second trip to the Winter Games, and he couldn't be happier. Hockey is his life and playing for the U.S. team is a privilege. Then he meets U.S. figure skater Amber Sloane. She's beautiful, ambitious and driven--everything Will desires in a woman. He would love to show Amber how hot life off the ice can be.

Amber has skated her entire life, sacrificing everything in the hopes of one day winning gold. Now she's competing for the third and final time. She intends to win, and nothing's going to get in her way--until she meets Will. He's an irresistible charmer, and before long Amber is wondering if this sexy hockey player is the perfect guy to show her some moves outside the rink.

But after all the medals have been awarded, Will and Amber will have to decide if what they have together is just a fling or a real shot at true love. 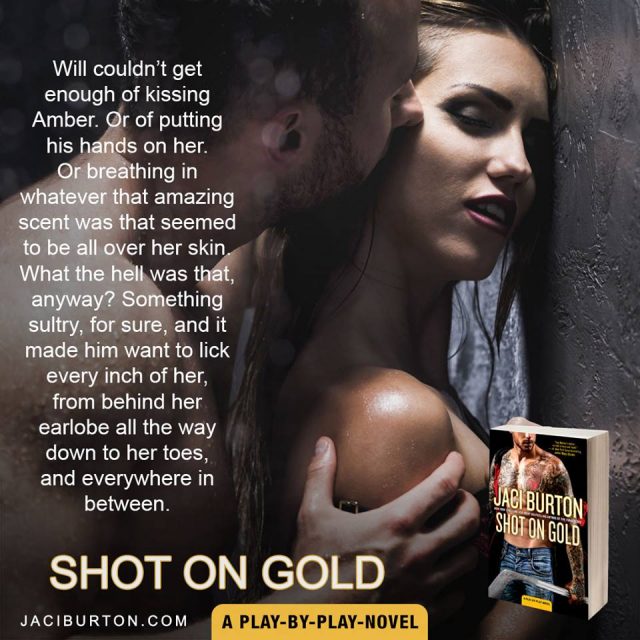 “Yeah? What are your cravings?”

He laughed. “That’s a damn fine menu, Amber. Surely you can have some of those things at least once a week, right?”

“I get healthy proteins, like lean chicken and fish. Only when I finish a competition am I allowed to indulge.”

“Allowed? Come on, honey, you’re a grown-ass woman. You can make your own decisions.”

She looked down at her ice cream, suddenly losing her appetite for its creamy sinfulness. She pushed it aside. “I do make my own decisions. Like now. I’m full.”

Will looked over at her cup. “You barely ate two bites.”

“It doesn’t take much to fill me up.” Which was her mother’s mantra.

Eat half of what’s on your plate, Amber. You’re thin anyway, so you don’t need a lot of food.

Except she was always hungry, and drinking more water never filled her up.

“Yeah? Well I’m eating this entire cone and two scoops, which I know I’ll burn up on the ice. You should do the same.”

Will didn’t understand how hard it was for her to maintain the balance between strength and figure. But she did. She’d worked so hard, and nothing was going to derail her.

Not even the tempting chocolate raspberry ice cream that sat in front of her.

This had been a mistake. She should have never come here with Will. But since she had, she’d politely wait until he finished his ice cream and then she’d make her way back to her apartment.

“So’s this mint chocolate chip. And I promise I don’t have germs.”

Oh, she’d love to put her mouth where he’d had his mouth. That wasn’t the issue at all. Just the thought of swirling her tongue where his tongue had been caused flames to lick along her nerve endings, making her wish they were outside where it was cooler.

He leaned forward, offering the cone. “Take a lick.”

She was going to self-combust if he kept talking to her that way.

“Okay.” She started to take the cone from him, but instead he wrapped his hand around hers and held the cone steady. She leaned forward and flicked her tongue over the top of the cone, watching the way his gaze was glued to her mouth, which only made her previous heated state grow more incendiary.

She sat back and pulled her hand from his. “It’s really good.”

“Yeah, it is really good,” he said, and Amber was certain he hadn’t been talking about the ice cream.

She’d been hit on by a lot of guys over the years, mainly at skating competitions, and especially at the international games. She’d ignored them all to focus only on her goal of winning. Never before had she been affected by flirting or guys coming on to her. She knew she’d be nothing more than a one-night stand, and she wasn’t much interested in being some guy’s forgettable bang.

But there was something about Will Madigan that intrigued her. He was hot, and had a magnificent body. She liked that they were compatible from a skating point of view, but she’d had attractive male figure skaters hit on her before and they had certainly been more compatible than Will, so what was the deal with this guy? Why him, other than she’d madly crushed on him four years ago when he’d never once even looked in her direction.

That was probably it. He’d noticed her tonight, and she felt vindicated. Plus, she was determined to live it up these games.

She wasn’t going to jump in the sack with the first guy on the first night.

Even if said guy was hot and sexy and had eyes that made her melt. 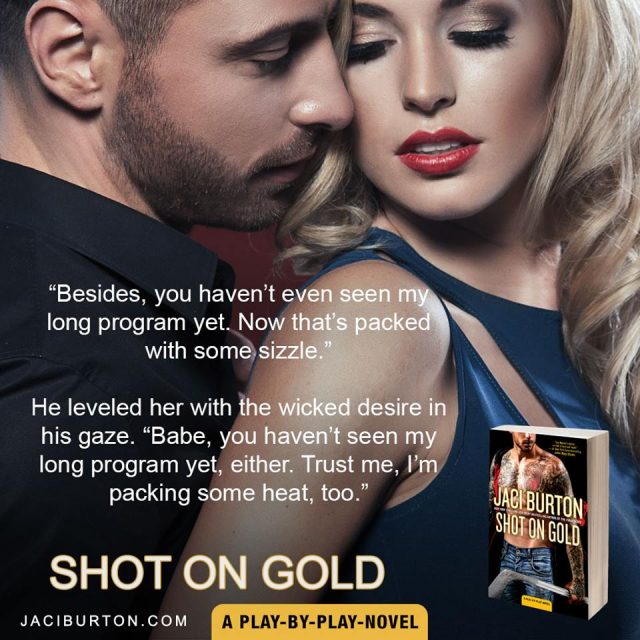 Confession, Shot on Gold was my introduction to Jaci Burton. Though it is book #14 in the Play by Play series, I read it as a standalone. Yes, I've been hearing the buzz about this author in the book world, and her work has been on my TBR. I might have even purchased a book or two, but I just never got around to reading one until now. Dumb, huh? Well, you can consider me schooled. I get it now. Consider me properly chastised and on the way to performing my future duties as a fangirl, #Stalking101

How strange and exhilarating it must be for Will to be on the US Olympic team, playing with former opponents and against his regular teammates that are competing for their own countries. To wish them well, but hope he beats them at the same time. Using his #MadDog skills against his friends has got to be difficult, but necessary when you're going for a shot at the gold.

Amber is 24 yrs old. This is her last shot at winning a gold medal. She's competing against 17-year-olds. She has been doing nothing but figure skating since she was very young. Her momager has been pushing her to be the best as long as she can remember. She has missed out on the fun things that most kids and teenagers enjoy growing up, including friendships. She's always been a loner, discouraged from forming friendships with her competition or attending events that didn't further her career. But she's been training hard for the last four years and she deserves to enjoy it this time, her last time. She's determined to push herself outside her comfort zone and to make some memories to last her for the years ahead. Luckily, Lisa, her previous roommate, has been assigned to her again. She refuses to let Amber hideout and includes her in the activities and events she attends. Before long, she runs into Will, the #HockeyHunk.

I really really enjoyed Amber. For having been an introvert for so long, she surprisingly has no filter when it comes to expressing her thoughts and feelings when talking to Will. Being a professional athlete, there's been no lack of female attention in his past. But somehow he seems to sense her need to be handled with care and doesn't push her, treating her instead to some friendly flirting. It was highly amusing when she turned the tables on him and spoke her mind. It was really fun waiting for the fireworks to spark between them.

I also found the winter sports details very interesting, along with the colorful support characters. I found myself mentally matchmaking and cheering for them as they competed against each other. I was ready to get myself a pair of #LuckyPanties to wear during their games. And of course, I was very anxious during the games that determined who would receive the gold medals. I was like their coaches, worrying when they would take risks and do things that might cause injury or affect their performance. What a nail-biting experience as I waited for the final outcome, on the ice, and in their hearts. Would they win a medal? Would they win in love? Could their connection last longer than the few weeks that would be together during the games? They are used to going all-in in their sport, could they do the same with each other?

Sorry, I'm not gonna give you a 'play by play' so you'll have to read this amazing book for yourself. I'm not sure if there will be more in this series or not, but I do know that this won't be my last read of this author's work. I will be on the lookout for whatever she has next. The line forms here... 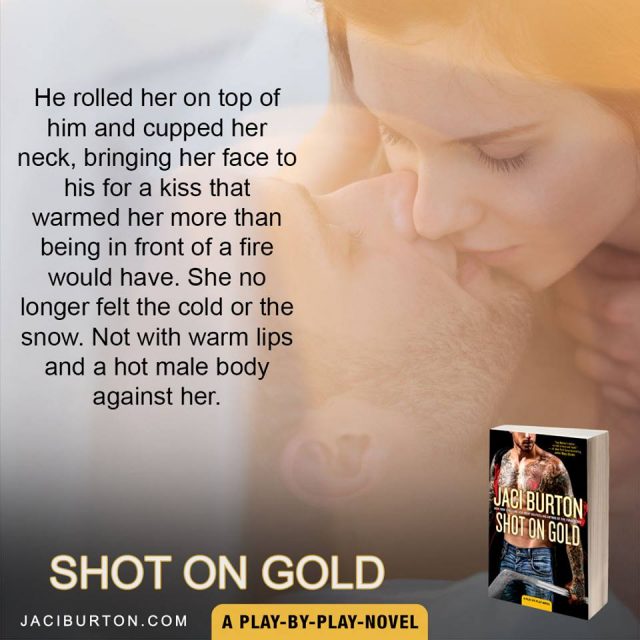 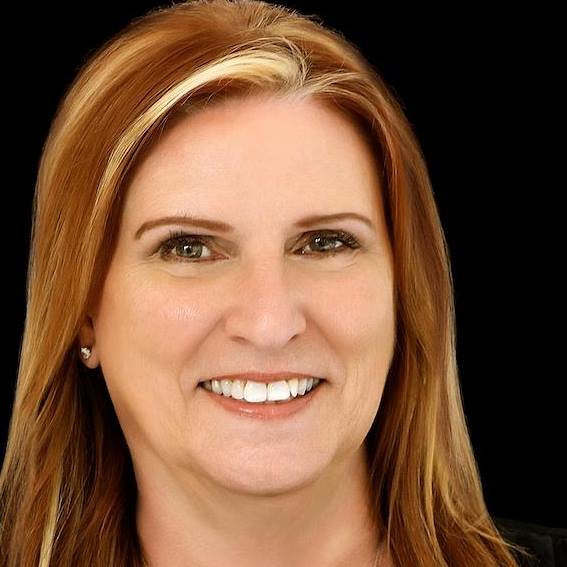 Jaci Burton is a New York Times and USA Today bestselling, award-winning author of over 60 books. She lives in Oklahoma and when she isn’t on deadline, she can usually be found trying to convince her husband to remodel some room or another in their house (she blames HGTV for this). She loves gardening, sports, casinos and getting lost in a great book. She’s a total romantic and longs for the happily ever after in every story, which you’ll find in all her books.