So Near the Horizon (Danny, #1) by Jessica Koch 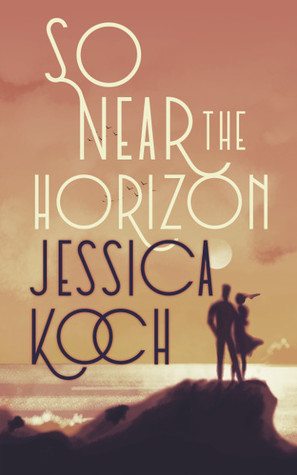 From the moment she crosses paths with Danny, Jessica is fascinated. The dashing, confident twenty-year-old has everything she dreams of—looks, success, independence, money—and his kind, infinitely cheerful nature is spellbinding.

Yet Jessica sees something else lingering underneath Danny’s perfect facade. Bit by bit, she manages to pick it apart, unveiling harrowing truths about a deeply traumatic childhood that has left more than just emotional scars. Now, far away from his home and family, he is fighting to build a normal life for himself—even though he may be destined for a future as dark as his past.

Despite all adversity and against all reason, a deep and intimate love develops between Danny and Jessica. But soon they find themselves confronting the harsh realities of a superficial world, battling against prejudice and exclusion at every turn… and, worst of all, racing against time… 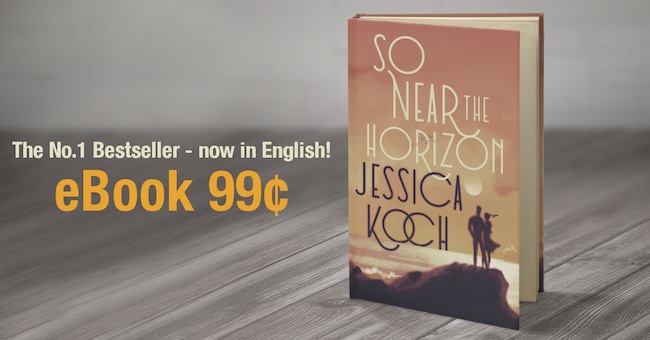 The author about her book

I first committed the story of my love for Danny to paper all the way back in 2003. I wasn’t trying to become an author—I just thought writing would help me work through some of the emotional burden I was carrying around. I wrote the manuscript with a typewriter and sent copies to two publishing houses, although without any serious interest in their response. Which made the contract I was offered all the more surprising: someone wanted to publish my story.

So what did I do? I turned it down!

The idea of the whole world knowing my far-too-personal story frightened me so much that I burned the manuscript—in a huge fire in my parents’ garden, a fire that had just finished consuming all my photos of me and Danny. I never managed to burn the photos I wasn’t in, though, and I saved his letters and poems as well, packing them carefully away in a box in the basement until I was ready to close the book on the subject for good.

In 2010—at age 28—I moved to a new city, got married, and had a son. One day, I mentioned to my husband in passing that I’d once written a book and been offered a publishing contract. He asked more questions, and what had started as a short anecdote about Danny became a week-long report. Noticing that I clearly hadn’t come to terms with a few parts of the story, my husband advised me to write it all out (again). From that moment on, I spent every free minute writing.

For weeks, I ran around carrying paper and a pencil, confused, caught up in a completely different time. My notes developed into a highly emotional novel. Purely out of curiosity, I sent the manuscript to five literary agencies. Within a few weeks, four of them had expressed interest, and, after several long conversations with publishers, I finally agreed to put So Near the Horizon out into the world. What happened from then on, still feels like a dream…

The enthusiastic response I received from readers prompted me to continue the series, and So Near the Abyss as well as So Near the Ocean, the second and third books in the Danny Trilogy, were released later on.

Jessica Koch’s dramatic debut novel, Dem Horizont so nah (So Near the Horizon), broke every record when it hit stores in Germany 2016. Released through a small, independent publishing house, the e-book was an instant success, selling over 250,000 copies in just a few months and topping the Amazon bestseller list for more than six weeks – which made it the number-one bestselling German-language e-book of the year 2016!

Since then, one of Germany’s largest publishing houses has purchased the rights to this riveting and highly emotional memoir. The foreign rights have been picked up in numerous countries, and the feature film is scheduled to arrive in theaters at the end of 2018.

As soon as I turned the corner, I saw him. In jeans and a royal-blue hoodie, he was leaning casually against a gleaming, black, thirty-foot limousine—a Lincoln Town Car—his arms folded. As always, his hair was sticking out in every direction. When he saw me, his face broke out into a radiant smile. A man dressed in black was standing at the front of the car, eyes downcast.

Chauffeur and everything? This is crazy…

My knees were threatening to give out, and my brain switched into offline mode again.

As I walked toward Danny, gaping in astonishment, he straightened and held out his hands. I took them, and his fingers closed briefly around mine. Once again, it was like he’d hit me with an electric shock.

“Because I’m falling in love,” he said quietly.

For a moment, the world stood still.

I was too stunned to react.

The chauffeur opened the car door, revealing an interior bathed in dim violet light. Still reeling a little, I settled onto the cream-colored leather upholstery that stretched across the entire length of the limousine, and Danny climbed in after me. The long marble-topped table in the center held a chilled bottle of champagne and two flutes already filled.

Danny handed me one of them, and we clinked our glasses together.

“I thought you didn’t drink,” I said shyly.

“Exceptions prove the rule,” Danny replied and took the first sip as the vehicle began rolling slowly out of the parking lot.

“How can you afford this kind of thing as a personal trainer?” I had no idea what it actually cost, but it surely wasn’t cheap.

He suppressed a grin. “I earn good money in my side job.”

“I knew it! You steal cars and sell them in other countries.”

“Um, no.” He looked genuinely perplexed.

“So you do the grandson scam? Knock on confused old ladies’ doors and make big eyes at them, and cry about how the Mafia is after you, and beg for money?”

He stared at me in surprise. Apparently, he hadn’t pegged me as someone with that much imagination. “It’s a lot less spectacular than that. Pretty boring by comparison, really. I just pose.”

I raised an eyebrow.

“For photos,” he clarified. “For a fashion label.”

“You model?” I shrieked at him. So he didn’t just look like a glossy-magazine model, he actually was one.

What the hell did this guy want with me?

In love, he said…

“Yeah,” he replied easily. “It’s nothing to scream about. They’re just photos. Ads, clothes, the usual. The pay’s good.”

“So that’s why you didn’t go to college?”

His expression turned grim. “No. That was for other reasons. Personal reasons.”

There it was again, that darkness in his eyes.

“Aren’t you afraid the modeling work will dry up someday when you’re old and ugly?” My curiosity knew no bounds.

“No, I’m not worried about that.” Then why did his voice sound so melancholy?

My champagne glass was empty by that point, but I felt awkward about refilling it, since Danny hadn’t taken his eyes off me. “There’s something I really don’t understand,” I began, emboldened by the champagne. “Why did you try to warn me away from you? Do you chop little girls up into pieces and bury them in the forest?”

The violet light gleamed in his hair as he tilted his head and regarded me. “I make drugs in my basement,” he said. “I have to be careful. Can’t let anyone find out.”

I regarded him skeptically. The problem with Danny’s dry humor was that you never knew whether he was joking.

He laughed quietly to himself when he realized I was trying to decide whether to believe him.

“Sarcasm is the sword of the intellectual,” he finally said. But then, all at once, his relaxed demeanor shifted again. “Seriously,” he said, “the fact is my life is one giant catastrophe. I don’t want anyone else to get sucked into it.”

“I’m not joking,” he insisted. “If you have an ounce of sense in your head, you’ll walk away and never look back.”

He sighed deeply. “Okay,” he said theatrically. “I’ll give you three choices, since you were kind enough to do so for me. All right?”

I nodded, a smile creeping onto my face.

“Then come on down, you’re the next contestant!” he said in his best TV-announcer voice. “Here are your options! One: A happy, worry-free life as a single woman. Two: Me. Three: You find a guy who’s right for you and live happily ever after. Pick a door, any door!”

“So am I!” But I couldn’t help giggling. “It’s just hard not to laugh. You’re really funny!”

He raised a questioning eyebrow. “Funny ha-ha or funny strange?”

“Is it at least an equal mix?”

“No. One more so than the other.” I turned to look out the window, at the pedestrians watching with interest as our limo pulled into the movie theater parking lot. 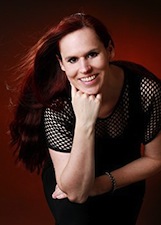 Jessica Koch (born in Ludwigsburg, Germany) began writing short stories when she was still in high school, but never submitted her work to publishers. In late 1999, shortly after beginning her studies to become an architectural drafter, she met Danny, a German-American dual national. Her experiences with him eventually formed the basis for So Near the Horizon, though it was nearly thirteen years before she felt ready to bring the manuscript to the public.

The author describes a life lived somewhere between hope and fear, between optimism and despair. She reflects on events from her own past with raw honesty, confronting more than one difficult subject along the way.

Jessica Koch lives near the city of Heilbronn with her husband, their son, and two dogs. The second and third books in the trilogy, So Near the Abyss and So Near the Ocean, are already best-sellers in Germany as well.

4 Comments to So Near the Horizon (Danny, #1) by Jessica Koch