The World According to Vince (Gym or Chocolate, #2) by Jane Harvey-Berrick and Stuart Reardon

Grace Cooper, corporate lawyer, isn’t falling for the dubious charms of British bad boy, Vince Azzo—but he’s a man on a mission, determined to change her mind—and lower her standards.
When Vince gets arrested, he needs Grace’s help. But not all the drama is in the courtroom.

Grace
The only thing I like about Vincent Azzo is that he’s 3,000 miles away.
I don’t care that he’s a gorgeous 6’ 4” slab of manhood with a piercing gaze and blinding smile. He’s always crass and rude and swears all the time, and OMG, his Instagram feed is full of his manhood outlined in briefs, boxers, sweatpants and tighty whiteys—sometimes not even that much. He’s gorgeous, it’s true, and he’s modelled for Armani—what on earth does he want with me?

Vince
Grace Cooper is a class act—too smart to fall for my charms, but that won’t stop me trying. She’s a hard nut to crack—corporate lawyer on the outside, all woman inside. She’s not interested in me—luckily, I love a challenge. 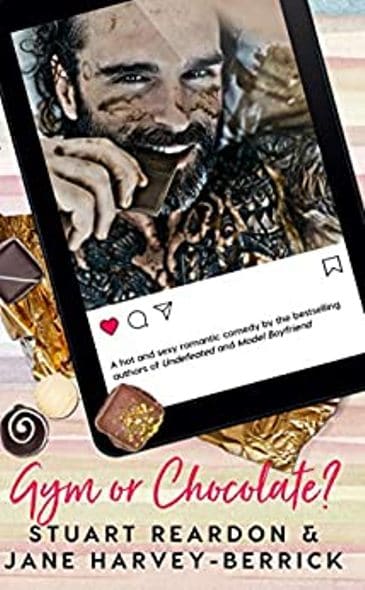 "The laugh-out-loud feel-good story you've been waiting for!"

Career girl and radio host hotshot Cady Callahan has never met a chocolate she didn’t love. She has curves and doesn’t care.
She’s shocked when a raffle ticket bought to support a veterans charity means she’s won a year’s membership to Body Tech, an exclusive Manhattan gym, where all the top athletes train and all the A-list actors go to get in shape for their action roles. She’s also won a personal trainer in the shape of far too tantalizing Rick Roberts.

Rick is less impressed when Cady’s arrival leads to a media circus. The retired British rugby ace runs a serious training facility, and he definitely doesn’t have time for anyone who doesn’t want to work hard.

When curvy Cady challenges him to train her to run a marathon by the end of the year, it seems a solution to both their problems. If … when she drops out of training, his gym will go back to normal.

But Cady isn’t planning on losing the bet—she just wasn’t counting on any complications. And surly Rick is very complicated. And as tempting as the tastiest treat...

When your world crashes down...
When they all say you’re out...
When your body is broken...
I will rise.
I will return.
And I will be undefeated.

Nick Renshaw is the golden boy of British rugby. When a serious injury threatens his career, he starts to spiral downwards, a broken man.

Feeling abandoned and betrayed by those closest to him, he fights to restart his life. Maybe there’s someone out there who can help him. Maybe he can find his way back toward the light. Maybe … not.

Dr. Anna Scott might be the one person who can help Nick, but she has her own secrets. And when Nick’s past comes back to haunt them both, the enigmatic doctor is more vulnerable than she seems.

Broken and betrayed, the struggle to survive seems intolerable. Who will give in, and who will rise, undefeated?

I didn’t set out to be a pirate.
Life for me was about surviving the ugliness that people knew existed but didn’t talk about.
I lived in hell.
Then I saw her.
I knew I couldn’t keep her, but for just a little while I had found heaven.
Eight years later, I can’t get her out of my head.
It is a mistake sailing to her island.
It is a mistake reaching out to her.
She doesn’t recognize me. Or maybe she does.
Closure, it is all I’m after.
Then my past comes back to haunt me.
She’s thrust into my ruthless world. An angel.
A romantic who has a journal that leads to a shipwreck and a lost treasure.
She’s wants to find the ending to a love story that is over two hundred years in the making.
I want to help her find it.
I didn’t set out to be a pirate.
I didn’t set out to fall in love with an angel.
I did both anyway.