Five hundred years ago, I fell in love with a vampire. It was a crimson fever that consumed me. I gave up my home, my family, and my pack to be with her. She obliterated my heart at the first opportunity.

Our fates are bound whether I like it or not. If she dies, I die.

She may have a death wish, but I don’t. When she decides to risk everything for revenge, I have no choice but to stop her and find a way to be free of the vow I made. But surviving the dangers of Ellnesari together might not have the outcome I expect. Instead of freedom, I learn who Manu Della Morte truly is, and that reignites a passion I thought I had lost.

Sandu Berdardi continues to exist only to protect his people. An ancient Carpathian, his entire long life has been dedicated to honor above all else. He knows his time has passed, especially since he has not been able to find his lifemate — the anchor to keep him sane in a world he no longer understands. But just as he truly starts to give up hope, a voice reaches out to him in the night and his world explodes into color.

Adalasia enters Sandu's mind seamlessly, as if she has been a part of him forever. While she can see the shape of things to come in her deck of cards, her gift is both a blessing and a curse. The true course of Sandu's quest remains unclear, with danger waiting at every turn. She cannot see everything the future holds, but she does know it is a journey they will take together.

Lose yourself in the magic...

Unleash your heart, indulge your senses, and satisfy your cravings with this fantastic collection of supernatural fiction featuring sensual heroes and sassy heroines, crafted by some of your favorite bestselling and award-winning authors.

Marked by Magic by Christa Wick

“I want to know what it’s like to be your mate.”

From her lips, like an arrow to his chest.

Michelle, the wolf clans’ newest discovered latent, is the mate Tanner can’t claim, but would give his life to protect. A lone wolf for far too many years, he’s simply too hardened, too old for her.

Too bad she’s even more stubborn than he is.

The woman’s got a mile-wide protective streak for the cubs being attacked by the Hunters, meaning he can’t let her out of his sight. Not with the war between shifters and Hunters at its deadliest.

With each passing day, Esme, the wolves’ most powerful witch, is dying before their eyes. And the search for answers leads to one vital secret the Hunters have known all along.

If Esme dies, the wolf packs will die with her.

Shifters or Hunters—in this final book of the Hunted Mates series, only one side will survive…

Masked by Danger by Christa Wick

Cade Mercer has spent nearly a year locating and saving latents—human mates of wolf shifters—from the deadly Hunters who’ll stop at nothing to find them before their mates can.

The newest latent his team has been sent to extract, however, isn’t a latent at all. She’s a she-wolf, a rare alpha female shifter whose mere presence can cause mayhem and bloodshed among unmated male shifters.

As if that weren’t complicated enough, she’s also apparently a highly-regarded homicide detective working a big case…while in heat.

And last, but certainly not least, she just so happens to be the one woman Cade never thought he’d ever see again.

Remington Weylyn is burned and broken. She made a choice and now she’s paying the price. The girl she once was is gone, replaced by someone she no longer recognizes. What once was her home now feels foreign and the people she was closest to feel like strangers.

And it’s all his fault.

Jax Whitlock is dangerous and damaged. With no home or family, his place in the world is unknown. The only thing he has is a goal; to kill the man who took everything from him. And he won’t let anything get in his way.

Even if it means breaking her heart.

When the monster who’s been haunting them for years emerges from the shadows, Remington and Jax must put aside their past and their mistakes if they want to save the people they care about.

If they don’t, everything will go up in flames.

*Fire Bound is the 4th and final book in The White Wolf Prophecy series. While it can be read as a standalone, it is highly reccomended you read the first three books for a better understanding and enjoyment of the story*

Stalked by the Kraken by Lillian Lark

A matchmaking witch, an ancient sea creature, and the sex contract they make.
Welcome to the Love Bathhouse where desire and acceptance are in the water.

The Witch
Celibacy is a bad look for a matchmaker.

Especially a matchmaker who works at the kind of paranormal bathhouse that would have grandmothers clutching their pearls.
A worse look is a matchmaker experiencing a crisis of confidence.
I am that matchmaker.

And now a mysterious man walks into my office, offering me the exact solution I need.
The problem is that he wants to be matched… with me.
Matching doesn’t work for me; I found that out the hard way.

The Kraken
I saw her and the creature inside me wanted.

She doesn’t want a relationship. She says that the most we can have are the three nights she promised me, but the dark part of myself isn’t going to let the woman who snared its attention go.

I found her. I hunted her. She’s mine.
**Stalked by the Kraken is a monster romance that features tentacles. This book is a standalone and takes place in the same world as, and prior to the events of, Three of Hearts with some character crossover.

Have you ever heard of the curse of the middle child? It’s real, and it makes you invisible. Growing up in a house with three headstrong witches, I was usually stuck playing the mediator.

When I met Rikkon, I immediately felt a kinship to him. He wasn’t invisible like me, but in a sense, he was forgotten. We bonded over things we couldn’t control. He was struggling with his demons, and I was lost.

It was easy to fall in love, but that was when things got complicated. When I thought we could be more than friends, Rikkon’s past came to rip my hopes to shreds. He recovered his memories, and with it, the knowledge that he was never free to be mine. Someone else had staked a claim, a bond so strong, that no mortal human could break.

Foolishly, I made a vow to help Rikkon reunite with his true mate, not realizing that by doing so, I might have unleashed the wrath of Ellnesari in our world.

Ransom Weylyn is a hunter. Hidden behind his easy smile and laid-back attitude is a wolf that craves bloodshed and carnage. No one knows how hard he works to keep that part of himself at bay. Not even his family sees behind his calm façade.

Isabeau Claremont is a killer. Born and bred to be a weapon and nothing more, she’s embraced the monster they’ve made her. She knows nothing but death and the darkness of shadows. She thought she’d accepted her fate and her purpose, but then she meets him.

With a connection that runs vein deep, Isabeau and Ransom must find a way to work together without killing each other in the process. A wolf shifter with temperament issues and a vampire with a knack for knives, what could go wrong?

*Shadow Bound is book 3 of the White Wolf Prophecy Series. While it can be read as a standalone, it is highly recommended you read books 1 and 2 for a better understanding and enjoyment of the story* 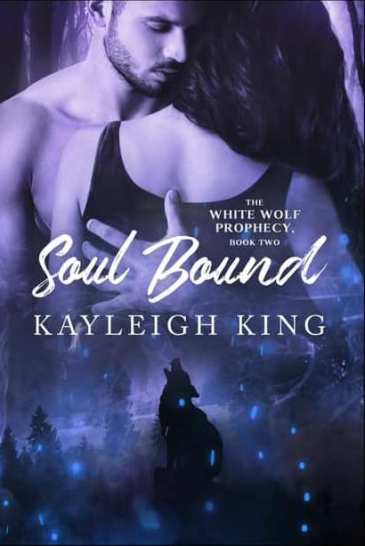 Until she shows up.

Winslow Montgomery is haunted by ghosts. Resigned to her fate, she does her best to help them move on and find peace. When a spirit appears and asks for her help, Winslow agrees to travel across the country in search of a mystery man named Ranger.

To keep both their promises, Ranger and Winslow will have to put aside their trust issues and ignore the sparks flying between them.

Soon, they discover there’s more hiding in the shadows than ghosts and there’s a much more sinister plan at play.

*Soul Bound is book 2 of the White Wolf Prophecy Series. While it can be read as a standalone, it is highly recommended you read book 1 for better understanding and enjoyment of the story*