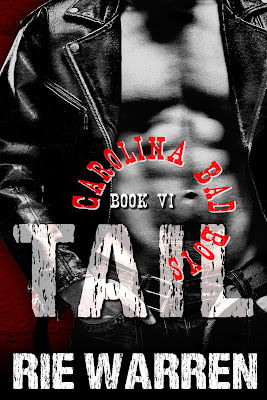 I’m most known for honeys on my arms and notches on my bedpost. But this time, I’m not chasing tail. Every rose has its thorn, and I’ve just been snagged.

TAIL
I have girls lapping out of my hands, forming lines for a chance to dance on my cock. Until she shows up. And it all grinds to a halt. Madison Rose Rush. No joke there. One look at her, and I feel a rush all over my body. I want that thing all the other dudes found. Love. A mate. A classy broad I probably don’t deserve.

I know one thing.

Is that gonna stop me?

Hell. No. Not even with the Bad Seeds MC breathing down my neck for a debt I can’t pay.

And Tail makes me want to be bad in ways I never even knew. He’s dangerously gorgeous. He’s affiliated with the same MC as my big brother. He has inked sleeves and sex on the brain and Max warned me away from him.

Is that going to stop me?

Nothing will stop us. Nothing. Until a rival MC—outlaw bikers—retaliates against Tail. Bad Seeds indeed. 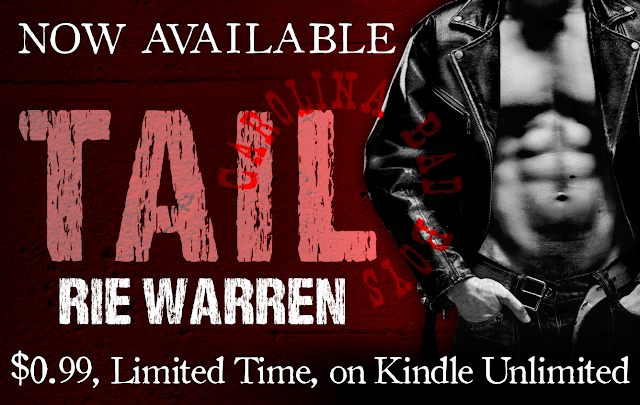 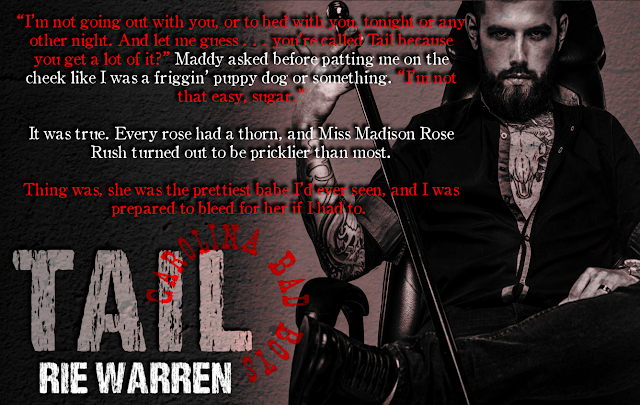 "Sweetness, you have filled up my whole damn heart."

What do you mean this is the last of the Carolina Bad Boys? I was having withdrawal before I even read the first page, knowing Tail would be the tail-end of an awesome series. Those bad boys have a special place in my heart and I'm not ready to let them go yet.

Tail earned his name. He had no shortage of tail available to him. He was frequently teased by his brothers for his neverending string of women, willing and waiting for their chance to be with him. He could have any woman he wanted, except her. Maddie is the little sister of one of his brothers. She was off-limits according to her brother. But that wasn't enough to keep him from pursuing her. Used to having women fall at his feet, she was a breath of fresh air, refusing to follow suit. She was his first tail-fail. And he wouldn't have it any other way. She deserved more, and he was going to give it to her. Even if he knew he didn't deserve her, he wanted her. Would she be the one to end his manwhore ways and give him what his brothers had? Was he ready to turn tail and stop running from commitment?

Maddie knew his reputation. She knew her brother didn't want her to have anything to do with Tail. She didn't intend to. But it never hurt to just stop and admire all that sexiness, right? As long as she never admitted that she was lusting after him, he'd never know. It was a good plan until he turned on the charm and focused it on her. He turned the tables on her, being helpful instead of sleazy. How was she supposed to concentrate on saying no, when she so desperately wanted to say yes?

I have to admit, there's a lot more to Tail than I expected. All that lighthearted flirtiness gave the impression that he had no worries. But that was the farthest thing from the truth. He had responsibilities weighing heavily on him. He had a crushing debt that just kept getting bigger and bigger and the Bad Seeds MC pushing him to pay. He'd always kept his problems to himself, choosing not to share them with his brothers. But his secret was catching up with him, and his time was running out. But he kept plugging away, working and buying more time, ever determined to get himself out of the mess he was in. But would he? Would his past end up hurting his future with the woman he couldn't stay away from? Would her brother's wrath be worse than the rival MC's? Would it all be worth it if she felt the same way he did?

As always, the author made me work for it. I had to wait and worry and wonder as the events unfolded and the danger was dealt with. But that's okay because while I was waiting, the love and the laughter between the Carolina Bad Boys and their women kept me entertained. And yes, I did a little spying as the passion between Tail & Maddie kept getting hotter and hotter. Though they were so busy with each other, they didn't even notice. I might have gotten a little scorched, but I'm not complaining. ????

Midday, I rolled up to Retribrewtion on my Harley.

Handsome was nowhere to be seen. Possibly a good thing since he’d apparently ratted me out to the veep of the MC.

No one questioned my presence when I walked inside the brewery. Also a good thing. Weaving through the bottom floor, I glared at anyone who gave me a second look. I took the steps, knocked on Maddy’s door, entered before she answered.

“I was running late this morning. Didn’t have time for contacts.” She bent over her paperwork, aaaand her blouse was revealing enough I could see the creamy dip of her cleavage.

“I’m working.” A smile curved the corner of her lips. But she didn’t look up.

The glasses were small and square and fancy.

Single-minded and sexy as fuck.

“What’s this? No babies today?” She flipped a folder over and typed some shit into her computer.

“No babies.” I closed the door. Locked it. “Just me. I missed you yesterday.”

Color flooded her face, a face she kept bent down. “How much?”

“Tons.” Christ. I loved doing this with Maddy. The cat and mouse when I’d already caught her. “Got a surprise for you. To say thanks for helping with Ma.”

Her eyes darted up from some paperwork she’d just signed and fastened on my groin. “Is it a big package?”

I could work with that.

I took off my jacket, shrugged off my shirt. Tested the doorknob to make sure no one would disturb us.

Maddy, my prey. My love. My lover. In heels, a blouse, a skirt. And those damn sexy glasses.

“I have a strict policy about not fucking in the workplace.” She backed away, her slanted smile and tilted hips nothing but pure invitation.

“Do you now?” I released the zipper on my black leathers. “You want a big package?” I shucked the leathers to midthigh, then pounced at Maddy, not that she was running away.

My lips swooping to hers for a deep wet kiss, I scooped her onto the desk.

Cock freed, I stroked the thick hard length just once. Once was enough.

I flicked the front clasp of her bra, her tits—firm, high, and supple—tumbling out. She started taking off the glasses.

“Uh uhn. Leave those on.” Pulling a pert nipple into my mouth, I ran my thumb repeatedly across the other peaked bud.

Maddy grasped the back of my head, twisting her fingers in my hair. I drew back only to lick across the mound of her breasts and onto the other nipple. Hitching her skirt up and up, I ruched it to her waist.

I cupped her pussy with my whole palm, feeling heated warmth seeping from inside.

She moaned and arched into me, guiding my mouth to hers. “Hurry. I’m ready.”

“Yeah? Hot to fuck me, sweetness?” I delved deeper into her mouth again, sliding my dick along the slickness of her panties.

Rie is the badass, sassafras author of Sugar Daddy and the Don’t Tell series–a breakthrough trilogy that crosses traditional publishing boundaries beginning with In His Command. Her latest endeavors include the Carolina Bad Boys, a fun, hot, and southern-sexy series.

You can connect with Rie via the social media hangouts listed on her website. She is represented by Saritza Hernandez, Corvisiero Literary Agency.

A Million to Stay by Blue Saffire
Perfect Cowboy by A.M. Hargrove
Devoted by Marie Johnston
Screwed by Rebecca Wilder
Faded in Bloom by Julia Wolf
Briana by Carmen Rosales
Perfect for Her by S.A. Clayton
Devastated by Marie Johnston
Doctor Playboy by J. Saman
F*cked by the Sinner by Hayley Faiman
And Then We Sever by A.V. Asher
Not a Role Model by Lani Lynn Vale