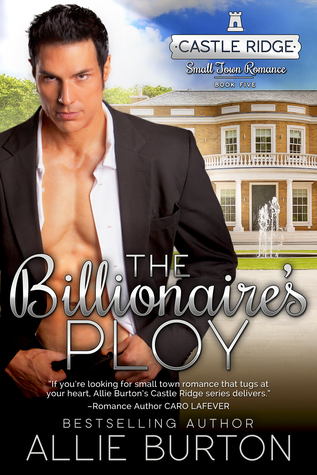 All’s fair in love and business.

Billionaire Jackson Croft refuses to let anything interfere with his merger and marriage plans. His merger. His brother’s marriage. When Emory Barrington returns to Castle Ridge and catches his younger brother’s attention, Jackson needs to take drastic steps to stop the flirtation. Even if it means using himself as bait.

As a child Emory was infatuated with the younger Croft brother, so when he invites her to a party she can’t resist. Until Jackson interrupts their dance, tries to bribe her, and then steals a kiss. A kiss that vibrates to her soul.

To make up for the attempted bribe, Jackson offers her a job decorating his Denver penthouse. She’s just starting her interior design firm and can’t turn the business away even if it means working closely with the billionaire. The project turnaround is fast and the attraction between Emory and Jackson grows faster. She believes she sees the real man beneath the façade, but when she learns of his double-dealing her heart can’t take the betrayal.

In this take on the Sabrina story, can deception lead to love?

“The party is tonight. You should come.”

Emory’s spirits flew. All her teenage fantasies about attending one of the Croft events burst into an explosion of light. Excitement shot through her entire body. Ryder Croft invited me, Emory Reese Barrington, to a Croft party.

Jeez, quit acting like a child. She shouldn’t be impressed. She’d been to lots of fancy parties in Spain. She was a special guest at a Vizconde’s party. Her thoughts soured. One of many of his special guests.

“You’re inviting me to your sister’s wedding reception? Isn’t it too late to RSVP?” Except he wasn’t inviting Emory, he didn’t know who he spoke to.
“There will be hundreds. One more person won’t be noticed.” He took her hand and rubbed his thumb against her skin. “We could dance.”

This should be where she swooned. Clutching the coat tighter between her hands, she imagined holding Ryder in her arms while they danced, of him walking her through their elaborate gardens as he’d done with other girls, of him kissing her.

Ryder would be disappointed when he found out her name. For now, for this one moment in time, she could feel special. “I’d love to.”

“Great.” An uneasiness slid into his gaze, and she wondered if he was picturing the woman he’d planned to propose to. He opened the trunk, taking out her suitcase.

Her heart leapt to her throat, blocking the passage of air. She pivoted around at the greeting. Her fantasy to pretend for a little while longer died by two words from the frightening, older brother. She’d hoped Ryder wouldn’t learn who she was until tonight at the party. When she was dressed up and looking her best.

It was too late now. “Hello, Jackson.”

Wearing a suit and tie on a Saturday afternoon, he strolled from his boring sedan parked ahead of them. His brown hair had been slicked back from his forehead in perfect grooming. A couple of new lines had formed on his forehead. Only a year older than Ryder, he acted at least five years older. Because he never had fun, his only interest being the family business.

“Emory?” Ryder raised his brown eyebrows into high arches. He hadn’t guessed who she was after spending thirty minutes in her company.

Her flying spirits took a dive and crashed to the ground. Had she been so unnoticeable as a kid? Jackson had recognized her immediately.

He signed off on a clipboard a worker gave him, barely glancing at her. “How was Barcelona?”

She angled her chin, surprised he remembered where she’d gone, and that she’d been gone at all. Their paths didn’t cross frequently in the past, on purpose. She’d avoided him and his overbearing attitude. “Good.”

The work experience had been great. The personal life, not so much. She wasn’t going to go into detail. Not with Jackson.

“Your mother is going to be glad you’re home.” Jackson considered her and his brother. His expression went quizzical. “Good to see you,” he said, before heading up the stairs and through the front door.

“Emory?” Ryder shook his head trying to get her name straight.

Her shoulders dropped farther every time he said her name. Her fantasy had ended sooner than expected. “I suppose your invitation to the party has been withdrawn, now you know who I am.”

She raised her brows. “Are you sure? Do you want to dance with the housekeeper’s daughter?”

He waved a hand in front of his face, and his expression cleared. He assessed her shape. “This is the twenty-first century.”

She squirmed with misgiving. Not really an answer to her question. 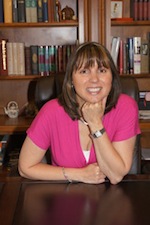 Allie Burton has always been a reader and writer. She wrote her first novel at the age of twelve when she was stranded at a hospital by a snowstorm. Receiving her first romance from her grandmother, she fell in love with the genre. As an adult, she read young adult books with her own teens and was excited to find something fresh and new. Now, she writes both.

Having so many jobs as a teen and adult became great research material for the stories she writes. She has been everything from a bike police officer to a professional mascot escort to an advertising executive. She has lived on three continents and in four states and has studied art, fashion design, and marine biology.

Allie is a member of the Society of Children’s Book Writers & Illustrators and Romance Writers of America. She loves to ski, golf, and run. Currently, she lives in Colorado with her husband and two children.

2 Comments to The Billionaire’s Ploy (Castle Ridge, #5) by Allie Burton