The Cowboy’s Runaway Bride (The McCall Brothers, #3) by Laurie LeClair 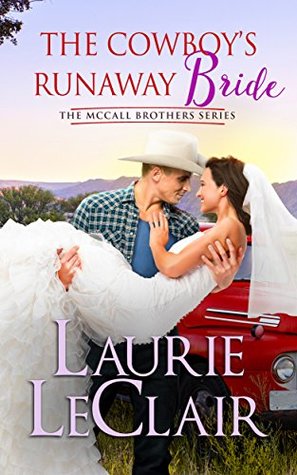 When Dallas society bride Elizabeth Eve Barrington discovers her intended’s financial ulterior motives for marriage, she hightails it out of the church in her wedding gown and hops in the back of a parked and beat-up pickup truck.

Happy to leave the big city, sexy cowboy Connor McCall jumps in his truck, revs up his engine, and then heads home to Honor, Texas with the goal of saving his family’s failing ranch. Hours later and miles down country roads, Connor discovers the stowaway bride, and he’s pretty sure she’s feigning amnesia.

What’s a cowboy to do? Cowboy up, of course. He takes Eve home, determined to solve her mystery. What he discovers is a lot of smoke–and where there’s smoke, there’s fire, with the heat generating between them hot enough to burn. Will Connor be damned if he falls for the beautiful runaway bride or will he be damned if he doesn’t?

“Look at that, Gramps. Another sucker getting hitched.” Conner McCall sat behind the wheel of his old truck in the thick, Saturday Dallas traffic.

He nodded to the long line of sleek, black limos clogging the opposite side of the lane as they inched down the busy city street.

Horns honked at the entourage taking up nearly a block and not allowing anyone to pull in or out. A few colorful shouts peppered the warm, summer air. People on the sidewalks stopped and stared.

“Pretty fancy stuff, if you ask me.” Gramps, with one hand securely on his sleeping pet miniature horse, Sweet Potato, craned his neck to see. “Maybe that will be you soon. Following in the footsteps of Cody and Caleb.”

“Oh, no. My brothers may have succumbed, but not me. Not yet. I have a long, long way to go before I settle down.” If ever. “First, we make it through this season and then we get the McCall ranch secure for the future.”

“From your lips to God’s ears. About the ol’ homestead, that is. But, you. I want for you what your Grams and I had and what your brothers found.”

“Not likely.” Conner had strong doubts their small town of Honor, Texas could provide the love of his life. Most likely he’d never find her. A little pang hit his ribs.

How many girls did he know who wanted to work and toil away on a ranch for decades to come? None he knew. And you can’t separate a cowboy from his horse, either. Not this one, at least.

Some had tried. None had succeeded. And never would.

He’d come dang close once, though, three years ago. Somewhere along the line, Conner finally figured out he’d always be her second best. Not getting stomped on again by some girl who fancies herself a cowboy for a rebound romance.

Maybe it just wasn’t meant to be for him. The love part. Somewhere deep inside, he worried he’d end up falling head over heels and losing her—like Gramps did with Grams. Conner didn’t think he could stand the crushing pain. Better to not even go there…

His grandfather’s suggestion made him laugh. “She’s older than you, Gramps.”

Conner shook his head at his grandfather’s antics. “Not of child bearing age, may I remind you. No great-grands there.”

They shared a chuckle.

“Scratch them off the list.” Gramps grabbed an invisible pencil from behind his ear and made a horizontal line in the air.

“Me? Why I let Cody and Caleb make up their minds, didn’t I?”

“Not that you didn’t help their romances along.”

“Now, I didn’t say that.” He admitted what they’d all known.

“Gramps, you’re a romantic at heart. Do me a favor and don’t butt in when it comes to me.” Pestering him about finding someone might just be on the top of Gramps’s list now that Conner’s brothers had tied the knot recently.

“If you say so, Conn.” Gramps sighed.

“We’ve got better things to concentrate on. I think we need to get an in with the biggest grocery store chain in Texas. We get a contract and a decent price, we can hold on to the ranch. It’s a guaranteed future income. Maybe even stop talking and start doing that more resilient breed of cattle you’ve always wanted.”

“You’re talking my language there. I like that. No exclusives, though. We need some options open. Plus, we don’t want to stop supplying the local restaurants in our own hometown. That breeding thing will take some time, though.”

The heat of the early afternoon drifted in through the open windows. And the heavy scent of fumes came with the breeze. Give Conner the country any day. “I’ve got the time and I can learn.”

“Son, hurt me something fierce when you had to drop out of college when Grams got sick.”

“Don’t dwell, Gramps. I’m working right where I want to be. The McCall ranch.” Taking care of his beloved grandfather, too, was right where Conner wanted to be.

“Light changed. They’re on the move. Uh, lookee there, must be the bride’s veil peeking out the window of the first one.”

Conner glanced in the side mirror. A gust of wind caught the sheer, white veil and sent it flying. He watched it float in the air. It landed in the crook between his truck and mirror. The lace-edged, delicate fabric fluttered and lifted.

Without thinking, he reached out, snatched it up, and then rolled it in a loose ball.

“I guess she’ll be wanting this back.” Conner shoved the gear in park and then undid his seat belt. “Be right back.”

In seconds, he popped open the door and then half ran down the street to catch the vehicle. His boots hit the asphalt with heavy thuds. The veil unfurled, streaming behind him. He gripped the bunched-up fabric he still held tighter. The red tail lights came on, sending a shot of relief through him.

This cowboy isn’t about to trot a mile though Dallas trailing her limo. That would be a sight to see.

He caught up to the shiny car and shoved the delicate material through the half open rear window. A feminine hand appeared at the same time, grabbed for it, and accidentally brushed her fingers along his wrist.

A current of electricity rushed through him.

Conner heard her loud gasp. She withdrew her hand instantly, along with the veil, reeling in the long fabric.

“Thank you.” Her soft voice whispered over him.

Low. Seductive. Or was the last just his imagination?

He could barely make out several shadowy figures in the dark interior before the power window rose. It shut with a smooth click.

Now, he only saw his wide eyes and slack jaw staring back at him in the reflection. He tipped his cowboy hat back and stepped away. The limo took off. The others followed.

Whoa! What the hell was that? He’d run into an electric fence with less charge than that and that was saying something.

The sound of his horn beeping over and over brought Conner back to the realization he stood in the middle of the street with moving cars charging by in front of him. Turning, he rushed back to Gramps and his truck, hopped in, slammed the door shut, and then shoved it into drive to keep up with the moving traffic.

His hand burned. He shook it, trying to rid himself of that feeling.

“You okay, Conn? About gave me a heart attack when they started up again.” Gramps calmed Sweet Potato, coming awake and rearing his head up. “Easy, little fella.”

Blowing out a breath, Conner shot his grandfather a grin, trying to smooth out the fresh worry lines gathered on the older man’s face. “Harder than dodging our charging cattle, Gramps. City folks. Never mind that, let’s get us some good barbecue before heading back home.”

“Now you’re talking. Just up ahead two blocks.” He smacked his lips. “Don’t tell your Uncle Jeb this place’s brisket is almost as good as his.”

“Not on your life. Aunt Sissy would have both our hides.”

Gramps chuckled along with him. “I appreciate you letting me ride along, son. Gives me some more time with you before you head out to the base camp tomorrow.”

“Good company. Long drive in the early hours. Picked up the part we needed—a little later and a little more than we wanted.” Conner cringed inwardly at that.

The ranch barely survived at the moment. If this season didn’t go well, they’d lose it all. Dread sat deep in his belly every time he thought about how they lived on the edge this last year. With his Grams dying, it rocked their world, especially Gramps, who kept too much from his three grandsons until it was almost too late.

Now, Caleb, Cody and he were doing everything in their power to save the family homestead and their legacy.

“Thought we’d have some daylight left to start fixing the trannie on the old rust bucket.” Conner shrugged and then quickly checked on the loose corner rope holding down the tarp covering the transmission. Tighten that baby up before we head out.

The last-minute repair on the ranch truck took more than a little coaxing this time. No, the part needed replacing and the closest place they could find the vintage model in Texas was Dallas.

Conner had volunteered since his two older brothers and their new brides either had second jobs outside the McCall ranch or were out on the range helping with the cattle. And their foreman and crew were too busy this time of year. Single, biding his time with packing up the last of the supplies to ride out on his horse tomorrow, he’d been the obvious choice.

“Should be home in time tonight to tuck in this little fella, though.” His voice held a smile. Gramps treated the miniature horse like a pet instead of a ranch animal.

“Don’t you be going and making wisecracks, too, Conn. I get enough of that from the others. He adopted me, not the other way around. You hear?”

“Just so we’re square and all.”

The cars ahead stopped at the quick light. Connor braked. He glanced to the side mirror, half hoping to catch a glimpse of that limo and the mystery bride. No such luck. Nothing but trucks, cars, and SUVs chugged along—brakes squealing and exhaust coughing out the tail pipes.

A tiny rope of disappointment went through him.

You’re sick, McCall. She’s a bride on her wedding day. Her groom is waiting for her. Or she may have even gotten married already and he’s sitting beside her.

But he couldn’t forget the sound of her sharp intake of breath.

And the current that rushed through him… 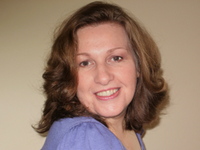 Bestselling author Laurie LeClair writes romantic comedies, contemporary romance, romantic suspense, and women’s fiction. Laurie has a not-so-secret love for characters who make her laugh, cry, and who linger in her mind long after the story ends. Laurie’s habit of daydreaming has gotten her into a few scrapes and launched her to take up her dream of writing. Finally, she can put all those stories in her head to rest as she brings them to life on the page.

Laurie loves to write, read, bake, travel, and discover new adventures. She considers herself a New Texan (New England born and raised and now living in Texas). She lives in Central Texas with her husband, Jim. Laurie loves to hear from her readers.

4 Comments to The Cowboy’s Runaway Bride (The McCall Brothers, #3) by Laurie LeClair